From Infogalactic: the planetary knowledge core
Jump to: navigation, search
"F1 2005" redirects here. For the video games based on the 2005 Formula One season, see Formula One 05 and F1 Grand Prix (2005 video game).

The 2005 Formula One season was the 56th FIA Formula One World Championship season, contested over a then record 19 Grands Prix. It commenced on 6 March 2005, and ended 16 October.

Fernando Alonso and the Renault F1 team won the World Drivers' and Constructors' Championships, ending five years of dominance by Michael Schumacher and Ferrari. Alonso's success made him the youngest champion in the history of the sport, a title he held until Lewis Hamilton's 2008 title success. Renault's success was their first as a constructor. Alonso started the season off strongly, winning three of the four first races, and his title success was in little doubt. He sealed the title in Brazil with two races left after a controlled third-place finish.

Alonso and Renault had to contend with the pace of the resurgent McLaren team with lead driver Kimi Räikkönen outshining team mate Juan Pablo Montoya, who came highly regarded from his time at Williams. Räikkönen won seven races like Alonso, but would have won more if not for a remarkable string of reliability issues, resulting in qualifying engine change penalties and retirements from the lead on three occasions. Nevertheless, Räikkönen grabbed the headlines winning from the back of the grid in Japan, passing Alonso's Renault team mate Giancarlo Fisichella on the final lap. Reigning champions Michael Schumacher and Ferrari had a poor seasons by their standards, with Bridgestone unable to compete with Michelin after the tyre-change ban that only affected the 2005 season. Their only win came in a remarkable fashion, with Michelin deeming their own tyres unsafe after several incidents in the oval turn at Indianapolis. As a result, only the six Bridgestone cars took part, which, if other drivers' non-starts does not count as participating, is the lowest attended starting field of a Formula One Grand Prix. Schumacher just held on for third in the Drivers' Championship, in spite of the superior pace of McLaren, underlying the disappointing season Montoya had. The Colombian missed two races early on due to an injury allegedly having occurred when playing tennis. He then won three races, showing glimpses of pace, but was distanced by team mate Räikkönen in the championship.

The 2005 season was the last for several well known Formula One teams, with the Minardi, BAR and Jordan teams all being taken over by new owners. The Red Bull Racing team made its debut during the season.

The following teams and drivers were competitors in the 2005 FIA Formula One World Championship. 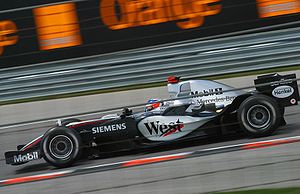 The BAR team was banned from the Grands Prix in Spain and Monaco, after both their cars were found to be underweight at the San Marino Grand Prix.

Shortly after the United States Grand Prix, Peter Sauber announced that Credit Suisse had sold BMW their majority share in his Sauber team, which announced its intention to run as BMW's factory team in 2006.

The most noticeable change to the 2005 season was its driver lineup — only seven drivers raced for the same team with which they began the 2004 season, and another seven drivers switched to new teams.

Renault partnered Fernando Alonso with the 2004 Sauber driver Giancarlo Fisichella, in a straight swap with Jacques Villeneuve (who had taken over from Jarno Trulli at Renault for the last three races of the season).

Williams employed an all-new driver lineup in 2005, having signed Jaguar's Mark Webber and Jordan's Nick Heidfeld to replace Juan Pablo Montoya and Ralf Schumacher. Montoya moved to McLaren, in place of the Red Bull-bound David Coulthard (who took Webber's vacated seat), while Ralf Schumacher signed for Toyota. This meant that Ricardo Zonta, who had raced for Toyota in five of the final six races of 2004, returned to a third driver role in 2005. Olivier Panis, who had driven in seventeen out of eighteen races for Toyota in 2004, was retained by the team in the dual capacity of advisor and test driver. Cristiano da Matta, who had started the 2004 season with Toyota, returned to Champ Car in 2005.

Jordan's other driver from the end of 2004, Timo Glock, also switched to Champ Car for 2005, leaving Jordan with two vacant seats. They were taken by Tiago Monteiro (a test driver for Minardi in 2004) and Narain Karthikeyan, both Formula One debutants, who had both competed in the previous year's World Series by Nissan season. Giorgio Pantano, who raced for Jordan for the majority of 2004, left Formula One altogether, joining the Super Nova Racing team for the inaugural GP2 Series season.

Minardi also ran an all-new lineup in 2005, with their 2004 drivers—Gianmaria Bruni (who switched to GP2 in 2005) and Zsolt Baumgartner—being replaced by a pair of debutants: Patrick Friesacher and Christijan Albers, who had competed in International Formula 3000 and DTM, respectively, during the previous season.

BAR test driver Anthony Davidson raced in Malaysia in place of an ill Takuma Sato. Sato returned to the seat for the next race.

Vitantonio Liuzzi and Christian Klien were both contracted to Red Bull Racing to participate in at least three races, and agreed to share their race seat for the season. While Klien, who had raced for the team's forerunners Jaguar in 2004, drove in the first three races, Liuzzi replaced him for the San Marino, Spanish, Monaco, and European Grands Prix. Klien returned for the Canadian Grand Prix, and completed the remainder of the season.

Robert Doornbos was Jordan's third driver for nine of the first eleven races of the season. Franck Montagny replaced him at the European Grand Prix, while Jordan were banned from using a third car at the Canadian Grand Prix after using too many tyres at the previous race. Nicolas Kiesa replaced Doornbos for the German Grand Prix onwards, when the Dutchman replaced Patrick Friesacher at Minardi due to sponsorship issues.

Chanoch Nissany became Minardi's third driver for the Hungarian Grand Prix. He was replaced by Enrico Toccacelo for the Turkish Grand Prix, while Pastor Maldonado drove on the Friday practice session for the team at the Italian Grand Prix.

Antônio Pizzonia replaced Nick Heidfeld at Williams for the Italian Grand Prix, when Heidfeld decided to withdraw after complaining of a severe headache. Earlier in the week, he had crashed heavily during a test session at Monza. Heidfeld had been due to return for the Brazilian Grand Prix, but after having a motorcycle accident he was forced to sit out the remainder of the season, with Pizzonia continuing to race for Williams in Heidfeld's absence.

The 2005 Formula One calendar featured one new event, the Turkish Grand Prix.

For a time there existed a distinct possibility that some teams would be running three race cars per Grand Prix. (Fewer than 10 teams, or 20 cars, starting on the grid would have resulted in some teams running three cars, under an obscure term in the Concorde Agreement.) By the first round of the season, though, there were ten teams, as Red Bull completed their takeover of Jaguar and were ready to race in Australia. Minardi, which initially received an injunction allowing them to compete despite their cars' non-conformity to new 2005 technical regulations, later modified their cars to adhere to 2005 regulations.

The most-noted aspect of the season was Ferrari's lack of pace caused mainly by a new rule prohibiting tyre changes during the course of a race. The Bridgestone tyres used by Ferrari could not find the right balance between performance and reliability, leaving the Michelin runners to battle for race victories.[1] Further rule changes emphasised the new focus on reliability, with engines required to last two Grands Prix without being changed.

Renault appeared the fastest team in pre-season testing and it was no surprise they dominated the early fly-away rounds. Giancarlo Fisichella won the season opener in Australia before team-mate Alonso demonstrated his title credentials with a series of victories in Malaysia, Bahrain and San Marino. As the season progressed the McLarens of Kimi Räikkönen and Juan Pablo Montoya became increasingly competitive and by the latter stages of the season the McLaren was generally considered the faster package. However, constant technical failures meant neither the team nor Räikkönen were able to translate their speed into Championship success.

Alonso secured his Drivers' Championship with a third-place finish in the Brazilian Grand Prix. Despite both he and Räikkönen having six victories to their name at this point in the season, Alonso's greater consistency meant he was able to claim the Championship with two rounds to spare. The Constructors' Championship was secured by Renault at the final race, with Alonso's seventh victory of the year. This gave Renault their first championship as a constructor (after only previously triumphing as an engine supplier) despite winning two fewer races than McLaren.

Ferrari finished third in the Constructors' Championship with only one win, at the United States Grand Prix, a race that was only contested by the six Bridgestone cars after Michelin declared their tyres unsafe to run in the Indianapolis Motor Speedway's unique banked corner.[2]

After a high-flying 2004 season the most conspicuous drop in performance after Ferrari was BAR-Honda, who were banned from two races after scrutineers in San Marino discovered a hidden fuel compartment that allowed their cars to run underweight. They were beaten in the Championship by Williams, whose engine partner BMW had announced they were leaving to join Sauber in June, and Toyota, who achieved 5 podium finishes and were only beaten to third in the championship because of Ferrari's 1–2 in Indianapolis.

All the teams scored world championship points over the course of the season, Minardi scoring rare points in their final season courtesy of being able to run in the US race.

The 2005 Formula One calendar featured a new event in Turkey, just miles from the Europe-Asia dividing line. The newly built circuit in Istanbul joined the 2004 newcomers Bahrain and China. The 2005 season witnessed two of the hottest Grands Prix ever: the track temperature at the beginning of the Malaysian event was 51 °C (124 °F), while in Bahrain the mercury soared past 56 °C (133 °F).

Points were awarded to the top eight classified finishers.

† Drivers did not finish the Grand Prix, but were classified as they completed over 90% of the race distance.
‡ Teams supplied with Michelin tyres elected to withdraw from the United States Grand Prix before the race started due to safety concerns.