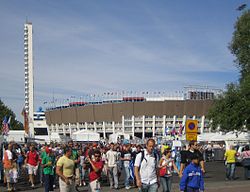 Helsinki Olympic Stadium at the opening day of the 2005 World Championships in Athletics.

The 10th World Championships in Athletics, under the auspices of the International Association of Athletics Federations (IAAF), were held in the Olympic Stadium, Helsinki, Finland (6 August 2005 – 14 August 2005), the site of the first IAAF World Championships in 1983. One theme of the 2005 championships was paralympic sports, some of which were included as exhibition events. Much of the event was played in extremely heavy rainfall.

The original winning bid for the competition was for London but the cost to build the required stadium at Picketts Lock and host the event was deemed too expensive by the government. UK Athletics suggested to move the host city to Sheffield (using Don Valley Stadium), but the IAAF stated that having London as the host city was central to their winning the bid. The championships bidding process was reopened as a result. The United Kingdom's withdrawal as host was the first case for a major sporting event in a developed country since Denver's withdrawal as host of the 1976 Winter Olympics.[1]

Helsinki was considered by many to be the outsider in the race to host the games with rival bids being presented by Berlin in Germany; Brussels in Belgium, Budapest in Hungary, Moscow in Russia and Rome in Italy.

Apocalyptica and Nightwish performed at the opening ceremony of the event over a heavy rainfall. Geir Rönning, Finland's Eurovision Song Contest 2005 entrant, sang "Victory" the official song of the 2005 IAAF World Championships.

With the addition of the women's 3000 metres steeplechase to the schedule, this year's program of events was closer to parity for women and men. With the exception of the 50 km walk the women competed in practically the same events as the men. Two differences remaining from before, though, were the short hurdles race (100 metres for women vs. 110 metres for men), and the multi-event competition (heptathlon for women vs. decathlon for men).

Since the first World Championships in Helsinki 1983, seven new events have been added for women:

The IAAF conducted their largest ever anti-doping program at an athletics event for the championships, with 705 athletes subjected to a total 884 of tests.[2] There were two athletes who failed drugs tests: Indian discus thrower Neelam Jaswant Singh tested positive for the stimulant pemoline, and Vladyslav Piskunov, a Ukrainian hammer thrower, tested positive for the steroid drostanolone.[3] Singh received a two-year ineligibility ban,[4] while Piskunov received a life ban from athletics as this was his second offence.[5]