The 2006 FIBA World Championship was an international basketball competition hosted by Japan from August 19 to September 3, 2006. It was co-organised by the International Basketball Federation (FIBA), Japan Basketball Association (JABBA) and the 2006 Organizing Committee. Badtz-Maru, a fellow character of Hello Kitty from Japanese company Sanrio, was the official 2006 mascot.

For the first time since 1986, the World Championship was contested by 24 nations, eight more than in 2002. As a result, group rounds were conducted in four different cities, with the knockout rounds being hosted by Saitama City.

The tournament was won by Spain, who, in the championship final, beat Greece, 70–47, to finish the tournament having won all nine games played. The bronze medal was won by the United States, who defeated Argentina, 96–81, in the third place game. Up to 2014, including the 2014 tournament, it has been the only tournament where neither Yugoslavia (or its Former Yugoslav Republic of Serbia) nor the USA have reached the final.

At the start of tournament, all 24 participating countries had 12 players on their roster.

Japan qualified as the host country, and Italy, Puerto Rico, Serbia and Montenegro, and Turkey gained FIBA wild-card invitations.[1] Argentina qualified as the champion of the 2004 Olympics. The remaining 18 countries qualified through their continents' qualifying tournaments (six from Europe, four from the Americas, three from each of Asia and Africa and two from Oceania).

The draw for 2006 World Championship was held in Tokyo on 15 January 2006. In the preliminary rounds, Group A played at Sendai, Group B at Hiroshima, Group C at Hamamatsu and Group D at Sapporo. The Medal Rounds were played at Saitama. 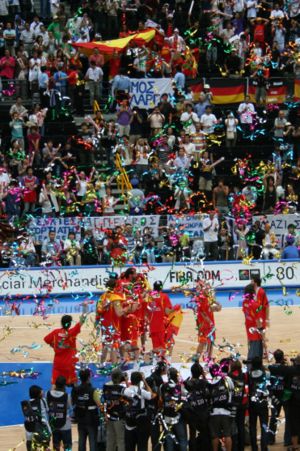 Since the inaugural competition one of the two teams competing for the title had been either the USA or Yugoslavia. After the latter's breakup, a Former Yugoslav Republic, Serbia, has taken its place in the final. The 2006 final was the first (and only, up to 2014) in which none of these two teams competed. The final was an unexpectedly one-sided affair, with Spain dominating from the beginning and limiting Greece (exhibiting possible fatigue from its previous game with the U.S.) to just 47 points, fewer than the Greeks had scored in any single game in the tournament, and less than half what Greece had scored against the USA in the semifinals. Spain won despite having lost power forward Pau Gasol, ultimately named the tournament's most valuable player, to injury in a semifinal match against Argentina.