This race was a scene of yet another record breaking milestone for Michael Schumacher, who became the first driver in F1 history to win the same Grand Prix on eight different occasions (having previously won the French Grand Prix in 1994, 1995, 1997, 1998, 2001, 2002 and 2004). Schumacher also achieved his 22nd career hat trick (pole position, win & fastest lap at the same race), also a record. Fernando Alonso, driving a Renault at the team's home race, finished second, whilst Schumacher's Ferrari team-mate, Felipe Massa, completed the podium by finishing in third position.

The bottom 6 teams in the 2005 Constructors' Championship and Super Aguri were entitled to run a third car in free practice on Friday. These drivers drove on Friday but did not compete in qualifying or the race.

Home driver Franck Montagny driving for Super Aguri. It would be his last outing for the team in the 2006 season. 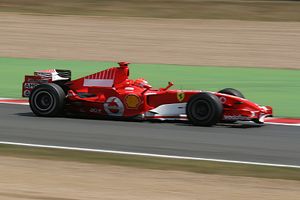 The race was won by Ferrari's Michael Schumacher.