The 2006 Hungarian Grand Prix was a Formula One motor race held on 6 August 2006 at the Hungaroring, Budapest. It was the 13th race of the 2006 Formula One season. Jenson Button won the race, the first victory of his career and the first race win for a British driver since David Coulthard won the Australian Grand Prix three years previously, and the first by an Englishman since Johnny Herbert won the 1999 European Grand Prix nearly seven years previously, in similarly changeable weather circumstances. Pedro de la Rosa finished second for McLaren, the first podium finish of his career, and Nick Heidfeld finished third, giving BMW Sauber their first ever podium.

The weekend before the grand prix, British motoring show host Jeremy Clarkson told Jenson Button that if he was going to win a race, he would need a better windscreen. It is not known whether the windscreen was actually changed. During Friday practice Fernando Alonso was given a two-second qualifying penalty by the stewards for dangerous driving and overtaking under a yellow flag condition.[2] This meant that two seconds would be added to his times in each part of qualifying. Christijan Albers was given a ten-place grid penalty for an engine change, his second in as many weekends. Jenson Button received the same penalty after having an engine change when his let go in the final practice session.[3]

In a similar situation to Alonso's penalty, Michael Schumacher was given a two-second penalty for overtaking Robert Kubica and Alonso under "red flag" conditions at the end of Saturday's last free practice session. The decision left Schumacher "fuming," with him saying "I blame myself partly for what did happen, but I didn't expect this kind of penalty."[4]

Button returns to the pit lane having won the race.

The track was wet at the start of the race, making it the first ever wet Hungarian Grand Prix. Polesitter Kimi Räikkönen took the lead early on. Alonso and Schumacher made their way through the field with Schumacher up into 6th place from 11th into the first corner, and Alonso climbing from 15th place with a spectacular first hardfought lap. He went on to pass Schumacher on the outside of turn 5 after a straight fight for several laps and reached 3rd place. He then took the lead after the McLarens of Pedro de la Rosa and Räikkönen pitted. Bridgestone wet-tyres used to dictate the field in non-dry conditions but today it seemed a one-off for the Japanese rubber. All Bridgestone-drivers, including the Ferraris, were seen struggling and seriously down on pace compared to their competitors. Schumacher fell right back in the clutches of Giancarlo Fisichella and lost his front wing battling for 5th place, hitting the Italian mid-corner fighting off snap-oversteer. This forced the German to pit, going a lap down. Soon after Jenson Button overtook Massa, Fisichella and Schumacher in just under the space of 2 laps. Räikkönen struggled on his second set of tyres and ended up crashing into the back of Vitantonio Liuzzi's Toro Rosso, vaulting the car and bringing out the safety car. Alonso then pitted, allowing Schumacher to get back on the lead lap. Another beneficiary of the safety car was Jenson Button, who decided not to pit during the safety car period and climbed up to 2nd place behind Alonso. After the period was over Button began to challenge Alonso, but soon had to pit for fuel. Alonso led, but after a pitstop for dry tyres his right-rear wheel nut detached, causing the Spaniard to lose control and crash. Button inherited the lead and was never challenged from then on. Schumacher made his way up to 2nd by staying on intermediate tyres as others around him pitted for dry weather ones, but this gamble backfired as the cars on drys caught him in the final laps. Schumacher defended his position (including controversially cutting a chicane on consecutive laps without penalty[6]), but Pedro de la Rosa and Nick Heidfeld both ultimately passed him. Whilst he was being overtaken Schumacher banged wheels with Heidfeld, damaging his Ferrari's suspension and forcing him out of the race three laps short of the finish. 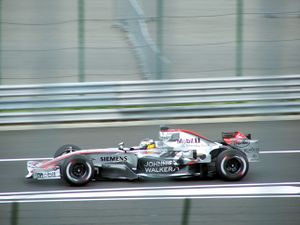 Pedro de la Rosa scored the first (and only) podium finish of his career in second position.

Button won the race despite beginning in 14th place through relentless driving with de la Rosa scoring his first podium with second place, and Heidfeld getting BMW Sauber's first ever podium with 3rd.[7] Debutant driver Robert Kubica finished in seventh place and scored two points, but was later disqualified as his car was underweight due to excessive tire wear.[8] This coincidentally meant that Michael Schumacher earned a point despite not finishing, as he was elevated to 8th place in the final results.[8] 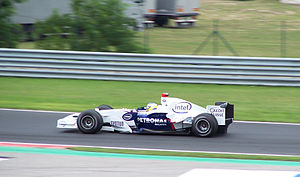