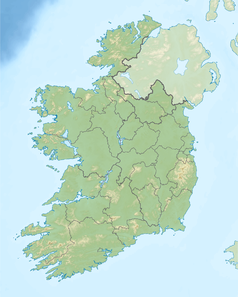 The 36th Ryder Cup Matches were held 22–24 September 2006 in Ireland at the Palmer Course of the K Club in Straffan, County Kildare, west of Dublin. It was the first time the event was played in Ireland.

Europe won by 18½ to 9½ points, equalling their record winning margin of two years earlier for their third consecutive win, a first for Europe.[1] Swedish rookie Henrik Stenson made the winning putt, just moments after Luke Donald sank a putt to ensure Europe retained the trophy.[2]

The K Club has two Arnold Palmer-designed championship courses and the 36th Ryder Cup was held on the Palmer Course (also known as the North or Old Course). The course is a parkland course located on the banks of the River Liffey, threaded through mature woodlands on the Straffan country estate.

In the United States, coverage of the first day was recorded live, but presented on tape-delay by USA Network. Bill Macatee hosted from the 18th tower. On Saturday, NBC Sports presented coverage on tape, but recorded live. NBC then aired the singles live on Sunday morning. Dan Hicks and Johnny Miller hosted from the 18th tower, Gary Koch and Bob Murphy called holes, while on-course reporters were Mark Rolfing, Roger Maltbie, and Dottie Pepper. To provide a European perspective, NBC used former European team player Nick Faldo as a guest analyst on the Saturday afternoon session. Faldo had worked in the same role for NBC at the 2002 Ryder Cup, and at the time of the 2006 edition was in between jobs, having worked as an analyst for ABC Sports from 2004-2006,but having signed with CBS Sports for 2007 and beyond.

The Ryder Cup is a match play event, with each match worth one point. The competition format used in 2004 and 2006 was as follows:

The European team consisted of:

The United States team consisted of:

Captains picks are shown in yellow; the world rankings and records are at the start of the 2006 Ryder Cup.

Captains picks are shown in yellow; the world rankings and records are at the start of the 2006 Ryder Cup.