As a consequence of the race, Michael Schumacher scored his third win of the season, ending championship rival Fernando Alonso's run of four consecutive wins and reducing the 2005 World Drivers' Champion's lead in the points standings to 19 over the German. Schumacher's Ferrari team-mate Felipe Massa made it a Ferrari one-two by finishing in second place as the Maranello-based team also reduced Renault's constructors points advantage to 26.

The race also marked the anniversary of the tire controversy a year earlier, when 14 cars withdrew before the race began because of safety concerns about the supply of Michelin tyres provided to them – which had resulted in crashes during practice.

Going into the race, Renault driver Fernando Alonso led the Drivers' Championship with 84 points, ahead of Michael Schumacher on 59 points and Kimi Räikkönen on 39 points. Giancarlo Fisichella was fourth with 37 points while Felipe Massa was fifth on 28 points. In the Constructors' Championship, Renault were leading with 121 points, Ferrari and McLaren were second and third with 87 and 65 points respectively, while Honda on 29 and BMW Sauber on 19 points contended for fourth place. Renault and Fernando Alonso had so far won the majority of the races, including victory in the preceding Canadian Grand Prix. Championship contenders Schumacher and Fisichella had each gained victories, and Räikkönen, Juan Pablo Montoya had each gained second place finishes. Massa, Jenson Button, Ralf Schumacher and David Coulthard had achieved third place podium finishes.

File:Felipe Massa 2006 USA.jpg
Scuderia Ferrari locked out the front row on the grid.

Three practice sessions were held before the Sunday race – two on Friday, and one on Saturday. The Friday morning and afternoon sessions each lasted 90 minutes; the third session, on Saturday morning, lasted for an hour.[1]

Michael Schumacher and Felipe Massa earned Ferrari a front row lockout, ahead of Giancarlo Fisichella and Rubens Barrichello. Jarno Trulli's car was still being repaired when cars were sent to parc fermé; because of that, Trulli had to start from the pit lane. Nico Rosberg was penalised for ignoring a signal during the qualification session, requiring him to get his car weighed at the FIA garage. The FIA cancelled all his qualifying times, and he started from 21st position. Toro Rosso's Vitantonio Liuzzi had the engine of his car changed, and had to start from 20th position on the grid.

The race started with two big accidents at the first corner, which eliminated 7 cars. At Turn 1, Mark Webber collided with Christian Klien, who then spun around and was taken out by Franck Montagny. In Turn 2, Juan Pablo Montoya nudged his team-mate Kimi Räikkönen into a spin. Montoya then clouted Jenson Button whose front right tyre got caught by BMW Sauber's Nick Heidfeld who was launched into a triple barrel roll; Montoya also clipped Scuderia Toro Rosso's Scott Speed in the incident. None of the drivers were injured. After that, the order stayed the same at the front, the only action being a battle at the back between David Coulthard, Nico Rosberg, and Vitantonio Liuzzi. Rosberg lost out and was the only finishing driver not to score in the race, with Liuzzi gaining Toro Rosso's first ever point. Montoya departed McLaren days after the race, announcing his move to NASCAR for the 2007 season for Chip Ganassi Racing.[2] 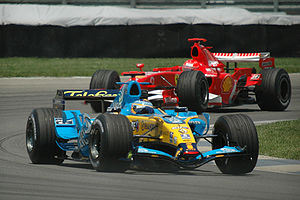