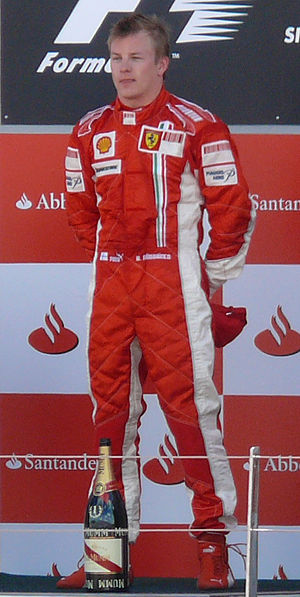 The 2007 Formula One season was the 58th season of FIA Formula One motor racing. It featured the 2007 FIA Formula One World Championship, which began on 18 March and ended on 21 October after seventeen events. The Drivers' Championship was won by Ferrari driver Kimi Räikkönen by one point at the final race of the season, making Räikkönen the third Finnish driver to take the title. An appeal by McLaren regarding the legality of some cars in the final race could have altered the championship standings,[1] but on 16 November, the appeal was reportedly rejected by the International Court of Appeal, confirming the championship results.[2] Räikkönen entered the final race in third position in the drivers' standings, but emerged as champion after the chequered flag, a feat first accomplished by Giuseppe Farina in 1950 and later matched by Alain Prost in 1986. It has since been accomplished again, by Sebastian Vettel, in 2010.

A major talking point of the season had been an espionage controversy involving Ferrari and McLaren, which led to McLaren being excluded from the Constructors' Championship. As a result, Ferrari clinched the championship at the Belgian Grand Prix.

The 2007 season was significant in that it heralded the end of the existing Concorde Agreement between the existing Formula One constructors and Bernie Ecclestone. In particular, Mercedes-Benz, BMW, and Honda (collectively the Grand Prix Manufacturers' Association) had a number of outstanding disagreements with the FIA and Ecclestone on financial and technical grounds. They had threatened to boycott Formula One from the 2008 season onwards and instead stage their own rival series, before signing a memorandum of understanding (MoU) at the 2006 Spanish Grand Prix.[3]

The 2007 Australian Grand Prix was the first time since the 1986 Brazilian Grand Prix that there was a Formula One field without a car with a Cosworth engine. This was also the final season since its reintroduction in 2002 in which the use of traction control was permitted. Standardised engine control units (ECUs) were mandated from the 2008 season onwards, which prevented teams from using the technology.[4]

Honda F1 ran with an "Earth livery" on their RA107 car, the first time since 1968, the year in which sponsorship in the sport became widespread,[5] that a team ran sponsor-free for an entire season.

The following teams and drivers participated in the 2007 Formula One season. Drivers' cars are numbered as per the official FIA 2007 entry list.[6] All team details are as per the Formula 1 official website, except where noted. Note that there is no car number 13, as was the historical tradition. 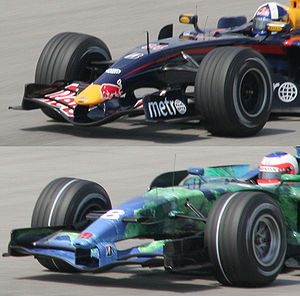 Pre-season testing began in November 2006 at the Circuit de Catalunya, with ten of the eleven teams participating in the test sessions. The most notable absentees were Fernando Alonso and Kimi Räikkönen, who were still under contract at Renault and McLaren respectively. Jenson Button was also absent as he had suffered a hairline fracture on his ribs after a go-karting accident in preparations for the November tests. Lewis Hamilton made his first appearance in a McLaren since being confirmed as Alonso's team-mate for 2007.

Felipe Massa topped the times on the first two days of testing. Massa's testing partner, Luca Badoer, took the fastest time on the third day, although interest was on the fact that double World Champion Mika Häkkinen joined Hamilton and de la Rosa at McLaren for a one off test, although the Finnish driver was over three seconds slower than Badoer's time, completing 79 laps of the Spanish circuit.

The other big story of 2007 was the return to a single tyre formula (Bridgestone). It was perceived that this accounted for some of the reason why Ferrari led the early tests, although it was claimed by Bridgestone that the 2007 tyre is of a completely new build, thus minimising any real benefit for the 2006 Bridgestone teams (Ferrari, Toyota, Williams, Midland/Spyker and Super Aguri).

Toyota was the only team out for the fourth day of testing at Barcelona, as the Japanese works team chose to miss the first day of testing. Both Ralf Schumacher and Jarno Trulli's fastest laps were quicker than Massa and Badoer's times during the previous three sessions. Testing resumed on 6 December at Jerez, with the majority of teams attending the session. Both Ferraris of Massa and Badoer were first and second fastest, with McLaren's Lewis Hamilton making up the top three in third. Hamilton improved on his position the following day by taking the fastest time, a second faster than Renault's Giancarlo Fisichella.

Japanese works teams Honda and Toyota topped the times for the next two days of testing: Honda's Rubens Barrichello and Toyota's Franck Montagny were fastest, although Toyota had the Jerez track to themselves when Montagny took the fastest time. Heikki Kovalainen and Pedro de la Rosa took the fastest times on the fourth and fifth day of testing at Jerez. Also of note, on the last day of testing Fernando Alonso made his McLaren testing debut after an agreement with manager Flavio Briatore. This did not call for an end to his agreement (which ended on 31 December).

The season started at Albert Park in Australia on 18 March. Kimi Räikkönen took a lights to flag victory and became the fourth driver to win on their debut for Ferrari. Fernando Alonso came second and debutant Lewis Hamilton finished 3rd. Felipe Massa took his first pole of the season in Malaysia but Alonso won his first race with McLaren while Hamilton continued his excellent pace to finish second. Massa won from lights to flag in Bahrain and Spain and in both races Hamilton finished second, becoming the first rookie to finish on the podium in more than his first two outings. McLaren dominated Monaco with Fernando Alonso winning from Lewis Hamilton after the pair had lapped everybody apart from themselves and Felipe Massa, who was not too far from being lapped.[42]

The Canadian GP was a very dramatic affair with 4 safety car periods and one of the biggest crashes of Formula One in recent years.[43] The race started off with the second all McLaren front row with Lewis Hamilton taking his first pole position followed by Fernando Alonso. Alonso made a mistake in turn 1 losing several places while Lewis Hamilton was opening a gap between himself and Nick Heidfeld. On lap 22 the first safety car period began after Adrian Sutil hit the concrete wall. The safety car went into the pits on lap 28 but before the lap could be completed Robert Kubica had a massive accident. He had apparently lost his front wing after hitting Jarno Trulli. He then went wide and hit a bump on the grass that launched him into the air and into a massive impact with the retaining barrier at a peak G Force of 75G. The safety car was once again deployed and went in on lap 35. Lewis Hamilton once again opened up a gap to second placed Nick Heidfeld until lap 50 when Christijan Albers left a lot of debris on the track after a crash forcing the deployment of the safety car. The race restarted on lap 55 and was deployed again on lap 56 after Vitantonio Liuzzi hit the so-called 'Wall of Champions'. The safety car period was extended after Jarno Trulli hit the tyre barrier at the exit of the pitlane after trying to catch up with the field. On the restart Lewis Hamilton led to the finish to claim his maiden win in only his sixth race. The next race at Indianapolis saw Lewis Hamilton take a lights to flag victory after a 300 km/h side by side battle with Fernando Alonso for the lead. Ferrari took their first 1–2 finish of the season in France with Kimi Räikkönen winning from polesitter, Felipe Massa.

In Britain Lewis Hamilton thrilled his home crowd by taking his third pole position in front of them. It wasn't to last, however, he went on to finish a distant third behind winner, Kimi Räikkönen and Fernando Alonso. Europe (Germany) would see Lewis Hamilton's run of consecutive podiums come to an end. After a mighty crash in qualifying he started in 10th in the race. On lap 4 he aquaplaned off the circuit in a torrential rainstorm but fortunately for him the race was stopped. He restarted after his car was pulled out of the gravel but after taking a gamble to change to dries on a drying track he spun off several times but recovered to finish 9th, just missing out on the final point.

The Japanese Grand Prix moved to Fuji Speedway and this event was marked by treacherous weather and was started under safety car conditions. Lewis Hamilton survived a brush with Robert Kubica to win from Heikki Kovalainen and Kimi Räikkönen. At the last 3 corners Robert Kubica and Felipe Massa ran side by side in a battle for 6th and Fernando Alonso aquaplaned and crashed on lap 41 of 67. In China, Lewis Hamilton won his 6th pole of the season and led up to lap 28 when he was overtaken by Kimi Räikkönen and he then spun off entering the pitlane. The season finale marked the first time since 1986 that 3 drivers had a chance of becoming World Champion at the season finale, and the first time since the inaugural season in 1950 that the man who stood in third before the final race went on to win the championship (the driver in 1950 being Giuseppe Farina). Lewis Hamilton was the favourite with 107 points followed by Fernando Alonso with 103 points and Kimi Räikkönen with 100 points. Lewis Hamilton started 2nd but dropped to the back of the pack after a gearbox problem. He recovered to 7th but Kimi Räikkönen won the race and the championship. The final standings were Räikkönen with 110 points followed by Lewis Hamilton and Fernando Alonso each with 109 points.

Points were awarded to the top eight classified finishers using the following structure: