2007 State of the Union Address 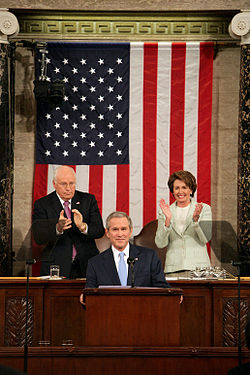 George W. Bush during the speech, with Vice President Dick Cheney and House Speaker Nancy Pelosi behind him.

The 2007 State of the Union address was a speech given by United States President George W. Bush on Tuesday, January 23, 2007, at 9:13 P.M. EST. The speech was given in front of a joint session of Congress, presided over by Speaker of the House of Representatives Nancy Pelosi and Vice President Dick Cheney in his capacity as President of the Senate. It was the first address to a Democratic-controlled Congress since 1994.

Furthermore, the speech marked the second time that a Democrat sat behind President Bush during a joint session of Congress and the first time at a State of the Union address. Traditionally, the Speaker of the House and the Vice President (the President of the Senate) are the only individuals on the rostrum with the President. However, in a joint session of Congress on September 20, 2001, following the September 11 attacks nine days earlier, president pro tempore Robert Byrd, a Democrat, took the place of Vice President Cheney, who was at an undisclosed location.[1] As the first female Speaker of the House, Nancy Pelosi is also the first woman in American history to stand on the podium during a State of the Union address.

Attorney General Alberto Gonzales was not present because traditionally a member of the President's cabinet, a designated survivor, does not attend in order to ensure presidential succession in the event of an emergency. Only four Supreme Court Justices attended the speech: Chief Justice John Roberts and Associate Justices Stephen Breyer, Samuel Alito, and Anthony Kennedy. Senator Tim Johnson and Congressman Charlie Norwood were not present because of serious health problems, but were acknowledged with applause. Johnson recovered and returned to work by September, while Norwood died on February 13, 2007.

Bush placed emphasis on balancing the federal budget, eliminating excessive earmarks, changing the tax code to replace the existing business tax exemption to workers health insurance premiums with a new personal health insurance deduction, providing health care for needy individuals, and expanding health savings accounts. Bush supported "laws that are fair and borders that are secure" in regards to immigration, suggesting a temporary worker program, stating that, "[a]s a result, they won't have to try to sneak in".[2] He suggested resolving the status of current illegal residents "without animosity and without amnesty".

Bush said the United States has been dependent on foreign oil for too long, and that this chances placing it in hostile situations. Bush asked Congress to work to reduce gasoline usage in the U.S. by 20 percent over the next ten years, and recommended research into alternative fuels. He asked Congress to "double the current capacity" of the Strategic Petroleum Reserve. In what appears to be a change of stance, Bush made a connection between energy policy and climate change: "America is on the verge of technological breakthroughs that will enable us to live our lives less dependent on oil. And these technologies will help us be better stewards of the environment, and they will help us to confront the serious challenge of global climate change." Bush specifically named plug-in hybrid vehicles as part of his "advanced energy initiative" to help end the U.S. "addiction to oil."

Bush asked Congress to give future federal court nominees a "fair hearing", and a "prompt up-or-down vote on the Senate floor."

In the realm of education, he asked Congress to renew the No Child Left Behind Act and consider school vouchers, although he never mentioned vouchers by name.

A large part of Bush's speech centered on the Iraq War. Bush emphasized that he still stood behind it, stating that, "to win the War on Terror, we must take the fight to the enemy."[2] He stated that the dangers of terrorism have not ended, and that it is the government's duty to locate terrorists and protect the American people. He stated that it was not responsible to leave Iraq yet, as it would put "ourselves in danger and our friends at risk." He emphasized that stability in Iraq is essential, and that chaos is the enemy's greatest ally. Bush asked Americans to give the Iraq War a chance, and support the troops on the field and "those on their way," a reference to the "surge" strategy involving 20,000 soldiers and Marines sent to Baghdad and al-Anbar, most of which would go to Baghdad.

Bush advocated adding to the ranks of the military. He asked Congress to authorize an increase in the Army and Marine active duty forces by 92,000 in the next five years. He spoke of developing a volunteer Civilian Reserve Corps which could help ease the burden on military personnel: "It would give people across America who do not wear the uniform a chance to serve in the defining struggle of our time."[2] The phrase terror (whether as terror, terrorism, or terrorist) appeared 22 times in his speech, highlighting its continuing significance in his administration's foreign policy and political position.[2]

Bush advocated saving the people affected by the conflict in Darfur, Sudan. He advocated continuing to fight HIV/AIDS, especially in Africa. Bush asked for $1.2 billion over the next five years to combat malaria in 15 African countries.

File:AutreyWesley.jpg
Wesley Autrey at the State of the Union Address

Toward the end of his speech, President Bush recognized four distinguished Americans. First, he pointed out Dikembe Mutombo, a player in the National Basketball Association. He is native to the Democratic Republic of the Congo and recently built a new hospital in Kinshasa, his hometown. Next, he introduced business and social entrepreneur Julie Aigner-Clark, who founded the Baby Einstein Company. Then, he introduced Wesley Autrey who, three weeks prior, saved a man with epilepsy from being run down by a New York City Subway train. Finally, he introduced Sergeant Tommy Rieman, an American soldier who continued to fight even though he was critically injured in Iraq.[3]

Webb said he hoped the Bush administration is serious about health care, education, and revitalizing the imperiled nation, as represented by New Orleans, Louisiana, following Hurricane Katrina (President Bush did not mention Katrina or New Orleans in his Address). He emphasized that corporate profits are not being fairly shared, stating that chief executive officers make over 400 times that of workers, on average. Therefore, it takes an average worker over one year to make as much money as his boss makes in one day. He advocated a policy that would begin to remove U.S. troops from Iraq, pointing out that polls show the majority of the American people do not support the direction of the Iraq War or the president's strategy.[4]

Steve Kubby, a California politician and declared candidate for the 2008 presidential election, delivered an unofficial response to the address for the Libertarian Party. Kubby criticized the president's policies on the economy, education, and foreign policy, which he referred to as "foreign military adventurism."[5]

The Wall Street Journal reported in an article the following Thursday that conservatives were upset and felt abandoned by Bush's shifts on immigration and health care, and quoted a high-ranking official with the American Conservative Union saying that "the president left a lot of conservatives shaking their heads".