The 2007 Tour de France, the 94th running of the race, took place from 7 July to 29 July 2007. The Tour began with a prologue in London, and ended with the traditional finish in Paris. Along the way, the route also passed through Belgium and Spain. It was won by Spanish rider Alberto Contador.[1]

The Tour was marked by doping controversies, with three riders and two teams withdrawn during the race following positive doping tests, including pre-race favorite Alexander Vinokourov and his Astana team. Following Stage 16, the leader of the general classification, Michael Rasmussen, was removed from the Tour by his Rabobank team, who accused him of lying about the reasons for missing several drug tests earlier in the year.

The general classification, indicated by the yellow jersey, was closely contested until the final time trial on stage 19. The top three riders, Alberto Contador in the yellow jersey as the leader, Cadel Evans in second, and Levi Leipheimer in third, were separated by only 2:49, with both Evans and Leipheimer recognized as far superior time trialists to Contador. In the end, each rider held his place after the final time trial, but with considerably slimmer margins, as the Tour ended with the smallest-ever spread of only 31 seconds among the top three riders. Alberto Contador also won the young rider classification, indicated by the white jersey, as the best young (under age 25) rider. 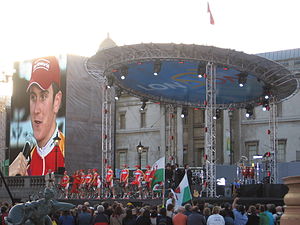 Geraint Thomas of Barloworld at the teams presentation.

A total of 21 teams were invited to the 2007 Tour de France. Each team sent a total of nine riders to participate in the Tour, which brought the starting total of the peloton to 189 riders.

Shown in the table below are the riders that, according to the bookmakers[3] on 7 July 2007, the start day of the 2007 Tour de France, had the best chances of winning the 2007 Tour. 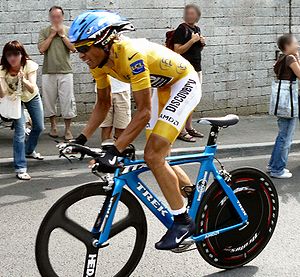 Janez Brajkovič, Damiano Cunego, Tom Danielson and Koldo Gil were all offered at odds within the range of this table, but withdrew before the race field was finalised.

The organisers of the Tour and London mayor Ken Livingstone announced on 24 January 2006 that the start of the Tour would take place in London. Livingstone noted the two stages would commemorate the victims of the 7 July 2005 London bombings, saying "Having the Grand Départ on the seventh of July will broadcast to the world that terrorism does not shake our city."

The routes for the Prologue in London and the first full stage through Kent, finishing in Canterbury, were announced on 9 February 2006 at the Queen Elizabeth II Conference Centre. This was the third time the Tour visited England, including Plymouth in (1974) and two stages in Kent, Sussex and Hampshire in (1994).

There was also a mountains classification. The organization categorized some climbs as either hors catégorie, first, second, third, or fourth-category; points for this classification were won by the first cyclists that reach the top of these climbs, with more points available for the higher-categorized climbs. The cyclist with the most points led the classification, and was identified with a polka dot jersey.[9]

For the team classification, the times of the best three cyclists per team on each stage were added; the leading team is the team with the lowest total time. The riders in the team that lead this classification were identified with yellow numbers.[10]

For the combativity award, a jury gives points after each stage to the cyclists they considered most combative. The cyclist with the most votes in all stages leads the classification.[10]

The rows in the following table correspond to the jerseys awarded after that stage was run.

The first scandal arrived when it was made public on 18 July that rider Patrik Sinkewitz from the T-Mobile Team had tested positive one month before the Tour started. Sinkewitz had already withdrawn from the race having incurred an injury during the 8th stage. The scandal was big enough to prompt German TV broadcasters ZDF and ARD to drop their coverage.[13]

The Tour was dealt a major blow when the first-place Astana team withdrew from the race on 24 July 2007, after team member and pre-race favorite Alexander Vinokourov from Kazakhstan tested positive for an illegal blood transfusion.[14] Vinokourov's teammates Andreas Klöden and Andrey Kashechkin were in 5th and 7th place respectively at the time.

At the start of the 16th stage on 25 July, some teams made a protest against the laxness of the official attitude to doping in the race.[15] After the stage, race officials announced that Cofidis team member Cristian Moreni of Italy had tested positive for elevated levels of testosterone, and the Cofidis team withdrew from the race.

Spanish cyclist Iban Mayo tested positive for EPO on the second rest day of the Tour, on 24 July.[16]

French prosecutors wanted to start a legal case against Vinokourov, Mayo and Moreni, and requested the UCI to hand over the doping samples. The UCI refused to give them, and in May 2011 the investigation was stopped.[17]

German cyclist Marcus Burghardt collided with a Labrador Retriever during Stage 9. The bike struck the dog on its backside, which buckled the front wheel and threw Burghardt over the handlebars onto the road. Remarkably the dog was unhurt by the collision, and it was grabbed by a spectator before it could cause any more damage.[18]

A second incident involving a dog occurred on Stage 18. Sandy Casar and Frederik Willems were in a four-man break when Casar collided with a dog running across the road, causing both him and Willems to fall. Casar was able to rejoin the break with the help of Axel Merckx despite receiving road rash on his right buttock, while Willems returned to the peloton. Casar went on to win the stage.[19][20][21]

After Stage 16, overall leader Michael Rasmussen was fired by his team, Rabobank, for violating team rules after he told the team that he was in Mexico with his wife in June, then being sighted training in Italy by Italian journalist Davide Cassani.[22] Rasmussen disputed this claim, maintaining that he was in Mexico. Thus, at the start of stage 17 there was no holder of the yellow jersey. Afterward the lead and the jersey were transferred to Discovery Channel's Alberto Contador.[23] Rasmussen later in 2013 confessed to doping from 1998 to 2010, including at the 2007 Tour de France.[24]