The 2008 Vuelta a España was the 63rd edition of the Vuelta a España, one of cycling's Grand Tours. The race began with a 7 km (4.3 mi) team time trial on August 30 in Granada. The Vuelta came to a close twenty-three days later with a 102.2 km (63.5 mi) flat stage, which brought the peloton into the streets of Madrid. Nineteen teams entered the race, which was won by the Spaniard Alberto Contador of Astana.[1][2] Second and third respectively were the American Levi Leipheimer of Astana and the Spanish Carlos Sastre of CSC–Saxo Bank.[2]

Alberto Contador first gained the race lead after the race's thirteenth stage, which contained a summit finish on the Alto de El Angliru.[3] Contador took the lead from Euskaltel–Euskadi's Egoi Martínez, who had held the race lead for four stages. Through the first nine days of racing the race leader's golden jersey had been worn by eight different riders. The day after Contador gained the lead of the race, he attacked again and won the stage, while also expanding his lead over his competitors. Contador lost about thirty seconds to his teammate Levi Leipheimer in the stage 20 individual time trial, but together he and Levi further distanced themselves from the other general classification contenders.

Contador's win at the Vuelta allowed him to become the first Spaniard - and the fifth person in the history of cycling - to win all three Grand Tours in a career.[1][4][5] At the age of 25, Contador became the youngest person to ever win all three Grand Tours.[1] Contador was also the third cyclist to ever win the Giro d'Italia and the Vuelta in the same calendar year.[6][7] In addition to the general classification, Contador also won the combination classification.[2] In the race's other classifications, Silence–Lotto's Greg Van Avermaet won the points classification[2][8] and David Moncoutié of the Cofidis team won the mountains classification.[2][8] Finally, Caisse d'Epargne won the team classification,[2][8] which ranked each of the nineteen teams contesting the race by lowest cumulative time.

Main article: List of teams and cyclists in the 2008 Vuelta a España

A total of 19 teams were invited to participate in the 2008 Vuelta a España. Sixteen of the competing squads were UCI ProTour teams, while the other three teams were UCI Professional Continental taems. Each team sent a squad of nine riders, so the Vuelta began with a peloton of 171 cyclists. Out of the 171 riders that started this edition of the Giro d'Italia, a total of 131[2] riders made it to the finish in Madrid. Team Columbia chose not participate in the race, as they withdrew their application to compete in the Vuelta in order to race the Tours of Ireland, Britain, and Missouri.[9][10] While Scott–American Beef - formerly known as Saunier Duval-Scott - was excluded from the event as a result of the doping cases of Riccardo Riccò and Leonardo Piepoli in the 2008 Tour de France.[11]

This edition of the Vuelta contained three time trial events, two of which were individual and one a team event. Six stages were classified as mountain stages, while two stages were deemed intermediate stages. Ten of the stages were designated as flat stages, which meant that they were primarily flat but could contain a climb or two of a lesser category.

The 2008 Vuelta a España began with a short team time trial in Granada, a traditional city in the history of the Vuelta, having hosted a stage start or finish 39 previous times.[13] Though Astana and Team CSC Saxo Bank were thought to be favorites to win this stage, the top team was Liquigas, which put their team leader Filippo Pozzato in the first golden jersey.[14] This set the stage for an extremely turbulent first week in terms of race leadership, as Alejandro Valverde, Daniele Bennati, Levi Leipheimer, Sylvain Chavanel, and Alessandro Ballan would all don the maillot oro between the race's beginning and Stage 7. All but Chavanel did this by virtue of stage wins - Chavanel, for his part, had been 2 seconds behind Leipheimer for the race lead after the Vuelta's first individual time trial (ITT),[15] and took it the next day thanks to time bonuses in intermediate sprints.[16] 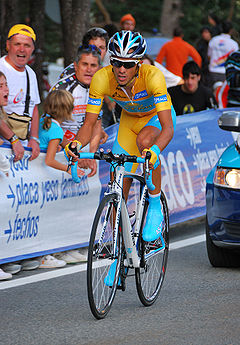 After the first rest day came the Vuelta's longest stage, said to be the queen stage,[16] as it had many high mountain climbs and an extremely difficult climb to the finish in Andorra. As it happened, the day the stage was run was marked by consistent rain and cold temperatures, making the stage harder still. Ballan won this stage from a breakaway and took the overall lead,[17] but he was unable to remain in contention the next day. Leipheimer, who had been in second overall, re-assumed the overall lead.[18] In Stage 9, Leipheimer's Astana team afforded a breakaway including Egoi Martínez sufficient time that Martínez took the overall lead, meaning that through nine stages the race lead had only been retained from one day to the next one time.[19]

The next several stages were flat, and won by sprinters and breakaways, meaning Martínez was able to retain the overall lead for a time. Stage 13, which ended at the storied Alto de El Angliru, revealed the race's overall contenders. Alberto Contador won the stage[3] and in so doing gained a lead over Leipheimer, Carlos Sastre, Ezequiel Mosquera, and Valverde which he would never relinquish. Contador padded this lead by winning the stage the next day,[20] and kept it in the race's second and final ITT, where his strongest challenger was ironically his teammate Leipheimer.[21]

The points classification was won by Belgian Silence–Lotto rider Greg Van Avermaet, who had won Stage 9[19] and finished in the top ten of nine other stages. The King of the Mountains went to Cofidis' David Moncoutié, also a stage winner.[18] The summit stage finish won by Moncoutié as well as points gained by topping climbs at the head of the peloton in the Angliru stage proved to propel Moncoutié into the red jersey. The combination classification, an award unique to the Vuelta among the Grand Tours, was won by Contador, as his first in the General Classification, second in the points classification, and third in the King of the Mountains Classification was by far the strongest combined showing by any rider. With the overall victory, Contador became the first Spaniard and fifth rider ever to complete the career sweep of the Grand Tours.[2]

Additionally, there was also a points classification, which awarded a blue jersey. In the points classification, cyclists received points for finishing in the top 15 in a stage. The winner got 25 points, second place 20, third 16, fourth 14, fifth 12, sixth 10, and one point per place less down the line, to a single point for fifteenth. In addition, some points could be won in intermediate sprints.

There was also a mountains classification, which awarded a red jersey. In the mountains classifications, points were won by reaching the top of a mountain before other cyclists. Each climb was categorized, with most of the climbs being either first, second, third, or fourth category. There were also two "special category" climbs (equivalent to Hors Categorie in the Tour de France), the stage finishes into Andorra and the Alto de El Angliru. "Special category" climbs paid 30 points for the first rider over the summit, then 25, 20, 16, 12, 10, 8, 6, 4, 3, 2 and 1. First category climbs paid 16 points for the leader, then 12, 10, 8, 6, 4, 3, 2 and 1, second category climbs 10, 7, 5, 3, 2 and 1, and third category climbs 6, 4, 2 and 1.

There was also a classification for teams. In this classification, the times of the best three cyclists per stage were added, and the team with the lowest time was leader.

The rows in the following table correspond to the jerseys awarded after that stage was run.

If a cyclist leads two or more competitions at the end of a stage, he receives all those jerseys. In the next stage, he can only wear one jersey, and he wears the jersey representing leadership in the most important competition (golden first, then blue, then red, then white). The other jerseys that the cyclists owns are worn in the next stage by the second-place (or, if needed, third or fourth-place) rider in that classification.