The 2009 Minnesota Twins season was the 49th season for the franchise in Minnesota, and the 109th overall in the American League. It was their final season at the Hubert H. Humphrey Metrodome with their new stadium, Target Field, opening in 2010. They ended the regular season as AL Central champions after defeating the Detroit Tigers in a one game tie-breaker.[1] They were then swept in the American League Division Series by the New York Yankees.[2]

On April 17, Jason Kubel hit for the cycle, becoming the ninth Twin to accomplish the feat. Kubel joins just six other American League cycle-hitters that filled the 'HR' slot with a grand slam home run.[3]

On May 22, Michael Cuddyer hit for the cycle, becoming the tenth Twin to accomplish the feat. When he homered twice in the seventh inning on August 23, Cuddy became the only man ever in baseball to accomplish both feats in the same season. Prior to Kubel last month, the eight previous Twins' cycle hitters were Rod Carew, 1970; César Tovar, 1972; Larry Hisle, 1976; Lyman Bostock, 1976; Mike Cubbage, 1978; Gary Ward, 1980; Kirby Puckett, 1986 and Carlos Gómez, 2008.

After 319 consecutive games, Justin Morneau sat out June 21. He hadn't missed a game since June 27, 2007, until manager Ron Gardenhire held him out today. His consecutive-games streak remains the longest for the Twins club.[4]

At the All-Star Game at Busch Stadium, Joe Mauer was the American League's starting catcher, and doubled in three at-bats. Justin Morneau and Joe Nathan entered as reserves. Nathan pitched an inning, walked one, struck out one and gave up one hit, earning a 'hold'.[5]

Closer Joe Nathan saved 47 games to top Eddie Guardado's previous club record of 45. He was a co-winner of the Rolaids Relief Man Award (with Mariano Rivera), only the second Twin (after Bill Campbell, in 1976) to do so. Nathan now leads in Twins career saves with 260.

Along with winning the Gold Glove and Silver Slugger awards, Joe Mauer was named American League MVP, the fifth Twin in history to be so honored. Mauer is the first AL catcher to lead the league in batting average, slugging percentage and on-base percentage. 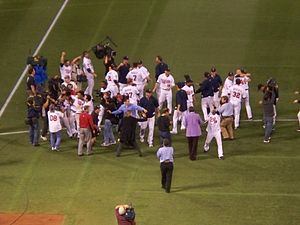 The Twins ended the 162-game regular season tied with the Detroit Tigers, necessitating a one-game playoff. This made the Twins the first major league team ever to play in a tie-breaker two years in a row (they lost one to the Chicago White Sox in 2008). The game took place on Tuesday, October 6 at the Metrodome. The Twins won the game, 6-5, in 12 innings on Alexi Casilla's game-winning hit scoring Carlos Gómez.[8]

The Twins went on to face the New York Yankees in the American League Division Series, which they lost in three consecutive games.