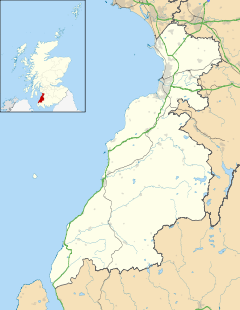 The 2009 Open Championship was the 138th Open Championship, held 16–19 July at the Ailsa Course of the Turnberry Resort, in Ayrshire, Scotland. Stewart Cink won his only major championship after a four-hole playoff with Tom Watson. Watson, age 59, had the chance to win his sixth Open and become the oldest major champion in history during regulation play, but was unable to par the final hole and tied with Cink.[2]

As with previous editions of The Open Championship at Turnberry, this event was played on the resort's Ailsa Course. Since it last hosted the Championship in 1994, the course had been lengthened by almost 250 yards (230 m), with over 60 yards (55 m) having been added to the par 5 17th hole. Six new tees had been built, and the 16th hole was 45 yards (41 m) longer and had been remodelled into a dog-leg to the right, having previously been relatively straight.[4]

Card of the course

Previous lengths of the course for The Open Championship:[1]

Each year, around two thirds of The Open Championship field consists of players that are fully exempt from qualifying for the Open. Below is a list of the exemption categories, and the players who were exempt for the 2009 Open. Each player is classified according to the first category by which they qualified, with other categories they also fall into being shown in parentheses. Some categories are not shown as all players in that category had already qualified from an earlier category:

8. First 3 and anyone tying for 3rd place, not exempt having applied above, in the top 20 of the 2009 PGA European Tour Race to Dubai on completion of the 2009 BMW PGA Championship
Thongchai Jaidee, Louis Oosthuizen, Robert Rock

10. The leading player, not exempt having applied above, in the first 5 and ties of each of the 2009 Open de France ALSTOM and the 2009 Barclays Scottish Open.

16. First 3 and anyone tying for 3rd place, not exempt having applied above, in the top 20 of the FedEx Cup points list of the 2009 PGA Tour on completion of the HP Byron Nelson Championship
Brian Gay, Charley Hoffman, Charles Howell III

17. First 2 PGA Tour members and any PGA Tour members tying for 2nd place, not exempt, in a cumulative money list taken from The Players Championship and the five PGA Tour events leading up to and including the 2009 AT&T National
Paul Goydos, Bryce Molder

18. The leading player, not exempt having applied above, in the first 5 and ties of each of the 2009 AT&T National and the 2009 John Deere Classic
Brandt Snedeker

21. First place on the 2008 PGA Tour of Australasia Order of Merit
Mark Brown

24. First 2, not exempt, on the Official Money List of the Japan Golf Tour for 2008
Prayad Marksaeng, Azuma Yano

26. First 2 and anyone tying for 2nd place, not exempt having applied (25) above, in a cumulative money list taken from all official 2009 Japan Golf Tour events up to and including the 2009 Mizuno Open Yomiuri Classic
Yuta Ikeda, Koumei Oda

Alternates
Drawn from the Official World Golf Rankings of 5 July 2009[14] (provide the player was entered in the Open and did not withdraw from qualifying):[9][15]

A calm and sunny Thursday meant good scoring conditions for the opening round of the 2009 championship. Miguel Ángel Jiménez took the overnight lead by firing a 6 under par 64. Past champions turned back the clock as 59-year-old five-time winner Tom Watson carded a bogey-free 65, and both 1989 champion Mark Calcavecchia (age 49) and 1998 champion Mark O'Meara (52) shot 67s. 2003 champion Ben Curtis also opened with a 65 to tie for second alongside Watson and Japan's Kenichi Kuboya, who was even par through 14 holes, but finished birdie, birdie, eagle, birdie. Last year's Cinderella story Greg Norman turned in a disappointing 77. Two-time defending champion Pádraig Harrington shot a quiet 69. Tiger Woods struggled off the tee and shot 71. Steve Stricker, Stewart Cink and Camilo Villegas, all looking for their first major championship, started strong with 66s. Notable players at -3 67: Calcavecchia, O'Meara, Retief Goosen, Jim Furyk, Mike Weir and Vijay Singh.[17][18]

The second round was windy with scattered showers, so it was much tougher than the first day. The scoring average was more than 2 strokes higher with just 7 sub-par rounds being posted on Friday compared to 50 on Thursday. The weather was at its worst during the morning, with the best rounds being the 68s of American Steve Marino, who would be joint leader at the end of the day, and England's Ross Fisher, who would be tied for 4th place. Retief Goosen shot an even par 70 and would also share 4th. Veteran Tom Watson continued his excellent performance. He struggled through the front nine, but holed long putts at the 16th and 18th, as he made three birdies on the back nine to tie Marino for the lead at 5 under par. At the age of 59, Watson looked to become the oldest winner of a major championship.[19]

The cut fell at 144 (4 over par) with 73 players making the cut. Sixteen-year-old Italian British Amateur Champion Matteo Manassero, playing with Watson, posted a level par second round 70, to go with his first round 71, to make the cut and all but secure the silver medal as the leading amateur.[20] Among those to miss the cut was world number one and pre-tournament favorite Tiger Woods. Going out in the afternoon, he could only manage a four over par 74 after making 2 double bogeys on holes 10 and 13, and he would finish one shot outside the cut line at 145. It was the first time Woods had missed the cut in the Open, and only the second time he had missed the cut in any major as a professional, after the 2006 U.S. Open.[19] Other notable players to miss the cut included Mike Weir (67–78=145), Ben Curtis (65–80=145), David Duval (71–76=147) and Geoff Ogilvy (75–78=153).[21]

Tom Watson continued his good form with a one over par 71 to maintain a one stroke lead going into Sunday's final round. Australian Mathew Goggin was one of only five players to shoot under par in conditions similar to Friday, and ended the day just one stroke off the lead, tied for second with Ross Fisher. The best round of the day was a three under par 67, posted by Bryce Molder, who leapt into the top 10, having been tied for 53rd after round two.[22][23]

Fisher, with birdies at each of the first two holes, took the outright lead from overnight leader Watson early on day four as Watson had 2 bogeys in 3 holes. Fisher dropped back with a quadruple bogey 8 on the 5th hole and was never in contention again. Lee Westwood eagled the 7th hole to move into the lead, which he held or shared for most of the round, but bogeys at three of the last 4 holes saw him fall one stroke behind clubhouse leader Cink, who rolled in a 15-foot (5 m) putt for birdie at the 18th to move to two-under, one clear of the previous year's leading amateur Chris Wood. Watson birdied the 17th to move into the clear lead at 3 under par. Needing a par four at the 18th to win, his approach shot took an unfortunate bounce and rolled off the back of the green. Watson was unable to get up and down and entered into a four-hole playoff with Cink for the Claret Jug.[2][24]

Watson and Cink had tied at 278 (–2) during regulation play and entered a playoff for the championship. Under the rules of the Open Championship, the playoff was played over four holes: numbers 5, 6, 17, and 18.

On the first playoff hole, both players found greenside bunkers, but while Watson was only able to make minimal progress towards the hole and made bogey, Cink splashed out to 6 feet and made his par. Both made par 3s on the second hole. On the third hole of the playoff, the par 5 17th, Watson's drive found a bad lie in heavy rough, and he was unable to reach the fairway with his next shot. Having reached the green in four, he then three-putted for a double bogey, while Cink hit the green in two and two putted for birdie. With a four stroke lead on the final hole, Cink hit his approach to five feet, and made birdie to triumph in the playoff by six strokes and win the Open Championship.[2][24]