The 2009 Tour de France was the 96th edition of the Tour de France, one of cycling's Grand Tours. It started on 4 July in the principality of Monaco with a 15 kilometres (9.3 mi) individual time trial which included a section of the Circuit de Monaco. The race visited six countries: Monaco, France, Spain, Andorra, Switzerland and Italy, and finished on 26 July on the Champs-Élysées in Paris.

The total length was 3,445 kilometres (2,141 mi),[1] including 93 kilometres (58 mi) in time-trials. There were seven mountain stages, three of which had mountaintop finishes, and one medium-mountain stage.[2] The race had a team time trial for the first time since 2005, the shortest distance in individual time trials since 1967, and the first penultimate-day mountain stage in the Tour's history.

2007 winner Alberto Contador won the race by a margin of 4′11″, having won both a mountain and time trial stage. His Astana team also took the team classification.[3] and supplied the initial third-place finisher, Lance Armstrong. Armstrong's achievement was later voided by the UCI in October 2012 following his non-dispute of a doping accusation by USADA, and fourth place Bradley Wiggins was promoted to the podium.[4][5] Andy Schleck, second overall, won the young riders' competition as he had the previous year. Franco Pellizotti originally won the polka dot jersey as the King of the Mountains, but had that result (along with all his 2009 results) stripped by the Court of Arbitration for Sport in 2011 due to his irregular values in the UCI's biological passport program detected in May 2010.[6] Mark Cavendish won six stages, including the final stage on the Champs-Élysées, but was beaten in the points classification by Thor Hushovd, who consequently won the green jersey.[7]

The race started in Monaco with a 15 kilometres (9.3 mi) individual time trial, won by Olympic time trial champion Fabian Cancellara, who retained the yellow jersey as leader of the general classification throughout the first week, which was dominated by stages suited primarily to sprinters, with Mark Cavendish establishing himself as the strongest finisher. The significant action of the first week in relation to the overall classification was restricted to a split in the field on stage 3, and a team time trial the following day.

The second weekend saw the Tour in the Pyrenees, and the first attack on the field by eventual winner Alberto Contador, while the leadership was taken over by Rinaldo Nocentini. Thor Hushovd showed an ability to take points in stages that did not include flat sprint finishes that would be key to the contest for the points classification, and the main contenders for the mountains classification emerged. The journey towards the Alps the following week had a second pair of successive stage wins for Cavendish and a series of wins from riders in breakaways that held no threat to the general classification. An infringement in the sprint finish to stage 14 saw Cavendish relegated in finishing position, and Hushovd gaining the upper hand in the points classification. 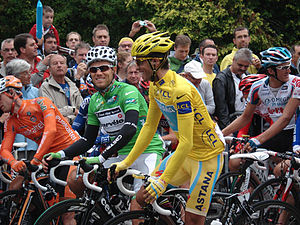 Contador wearing the yellow jersey during the 17th stage of the 2010 Tour de France.

The first alpine stage was the occasion of Contador's assumption of the race leadership, and the emergence of Andy Schleck as the only rider likely to challenge him in the mountains, and as the top young rider, giving Schleck the right to wear the white jersey. Franco Pellizotti focussed on collecting points on the climbs early in stages to overhaul Egoi Martínez in the race for the mountains classification, without threatening the race leaders. By the end of the three stages in the Alps, and after Contador's victory in the final time trial, it was only the minor placings that were realistically under question in the last mountain stage, held for the first time on the penultimate day of the tour on Mont Ventoux.

The UCI introduced a ban on radio communication between team management and riders on stage 10, but the riders responded with a conservative style of racing for most of the stage and the intended repetition of the experiment on stage 13 was abandoned.[8]

20 teams were invited to take part in the race. They include 17 of the 18 UCI ProTour teams (all except for Fuji–Servetto) and three other teams: Skil–Shimano, Cervélo TestTeam and Agritubel. Each team started with 9 riders, making a total of 180 participants, of whom 156 finished.

Favorites for the race included 2008 winner Carlos Sastre, 2007 winner Alberto Contador, 2009 Giro d'Italia winner Denis Menchov and two time runner-up Cadel Evans.[11] Lance Armstrong came out of retirement and competed in the race on the same team as Contador. Menchov and Evans performed far below the levels expected of them, finishing 51st and 30th respectively, and Sastre only showed briefly among the leaders on the mountain stages that would have provided his best chance of making a bid for victory, coming 17th overall.

Alejandro Valverde, the team leader of Caisse d'Epargne, was not selected by his team for the Tour de France, because the race travelled through Italy on stage 16 and he had received a ban in May 2009 from the Italian Olympic Committee, prohibiting him from competing in Italy. He had finished in the top ten of the general classification of the Tour in the two previous years and was considered one of the favourites for overall victory.

News about a positive retest of a 2007 out-of-competition control concerning Thomas Dekker broke three days before the start; his team Silence–Lotto immediately withdrew him from the starting list.

* Stage 16 was originally won by Mikel Astarloza, who was found after the Tour to have tested positive for EPO before the race had started.[15] The organisers have stripped him of the stage win, and former number two Sandy Casar became the official winner.[16]

The following points were earned in the Tour towards the 2009 UCI World Ranking.

In the 2009 Tour, Doping controls were conducted by the UCI, with the French body AFLD shadowing the process. Officials targeted top riders like Lance Armstrong and Alberto Contador with an unprecedented amount of tests.[19] While the Armstrong-Contador conflict ruled the headlines, reporting on doping rather took a back seat during the race. The news that Giro runner-up Danilo Di Luca had a positive A probe in the Giro did not change that.[20] Five days after the race finished the UCI announced that that initial Stage 16 winner Mikel Astarloza tested positive for EPO in an out-of-competition test on 26 June, eight days before the race started.[21] Later, Astarloza was removed from the results, and the stage win transferred to Sandy Casar.[16]

Just days before the 2010 Giro d'Italia, 2009 Giro podium finisher and King of the Mountains winner in this Tour Franco Pellizotti was announced by the UCI as a rider of interest in their biological passport program. He was sidelined by his team, and did not race again in 2010. The case was not fully resolved until March 2011, at which time the Court of Arbitration for Sport ordered Pellizotti banned for two years, to pay a fine and court costs, and have all his 2009 results vacated.[6]

In October 2012, Lance Armstrong had all his results post 1998, including the 2009 Tour, voided by the UCI following the USADA investigation into systematic doping.[22]

On 10 July 2014, a UCI press release detailing various athlete sanctions specified that Menchov had been banned (for a period of two years) until 9 April 2015 due to adverse biological passport findings. Due to this, he has been disqualified from the 2009, 2010 and 2012 Tours de France.[23]