Qantas returned as title sponsor of the event after previously holding the position between 1997 and 2001.[4]

It was reported that Virgin had built their cars with a fuel tank that was too small to allow the race to be completed at full speed. They had to ask the FIA for permission to introduce a new chassis. However, the new chassis would not be ready until the Spanish Grand Prix on 9 May.[5]

Lewis Hamilton had the Mercedes road car he was driving impounded on Friday for what he referred to as 'over-exuberant driving', he had reported deliberately spun his wheels upon exiting the circuit.[6][7] 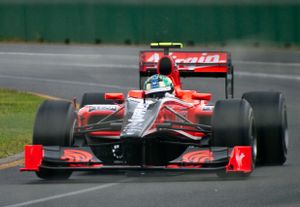 Lucas di Grassi was one of the few drivers who did not record a time during second practice.

Reigning World Champion Jenson Button set the early pace in the first practice session, but he was superseded in the later stages by Renault's Robert Kubica and the Mercedes of Nico Rosberg, with Kubica setting a time half a second quicker than Button and edging Rosberg out by two tenths of a second. Championship leader Fernando Alonso struggled, lagging behind team-mate Felipe Massa for the majority of the session, as did Michael Schumacher, who finished the session outside of the top ten. Kubica's team-mate Vitaly Petrov was the highest-placed rookie driver, running as high as sixth place before having to settle for ninth behind Sébastien Buemi and ahead of the Force Indias; the next-best rookie was German driver Nico Hülkenberg, who finished the session in seventeenth and two seconds behind Petrov. The Lotuses of Jarno Trulli and Heikki Kovalainen continued to set the pace for the newcomers, while the Virgins were split by both Karun Chandhok and Bruno Senna. The only major incident in the session was a series of front wing failures to befall BMW Sauber driver Kamui Kobayashi, who lost one front wing after hitting a kerb too hard at turn twelve, and again on the approach to turn three after he had left the pits to replace it. Team-mate Pedro de la Rosa stopped on the circuit shortly thereafter. 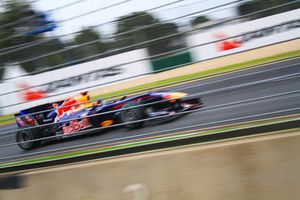 The second practice session was declared wet, though only light rain fell over Melbourne. The session passed without incident, though the Hispania team did not take to the circuit save for Chandhok completing an installation lap. Lucas di Grassi also failed to register a lap time. The McLarens of Button and Lewis Hamilton dominated the session, spending most of the ninety minutes a second faster than anyone else, and it was not until the final ten minutes that Mark Webber and Schumacher were able to close the gap. When the chequered flag fell, Hamilton led from Button, with Webber third and Schumacher fourth. After setting the fastest time of the first session, Robert Kubica could only manage the eleventh-best time whilst team-mate Petrov was once again the fastest rookie driver, finishing fifth behind Schumacher. Kovalainen and Lotus were once again the fastest of the new teams in eighteenth place, even going so far as to set a time faster than Jaime Alguersuari's Toro Rosso and finishing just three tenths of a second behind Massa. 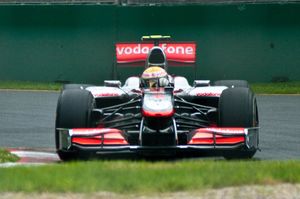 Lewis Hamilton produced a poor performance in qualifying, and was eliminated in the second part of the session and would start the race from eleventh on the grid.

The third and final practice sesson was once again incident-free, with Alonso, Schumacher and Webber exchanging blows throughout the hour of practice. The Australian emerged on top, with championship leader Alonso a close second. Many of the front-runners were plagued with traffic encounters, while both Hispania cars stopped on the circuit once again, both victims of perpetual hydraulics issues. Lotus remained the fastest of the new teams, a second quicker than Virgin and four and a half seconds quicker than Hispania.

Both Hispanias, Lotuses and Virgins were eliminated in Q1 along with Petrov. Hamilton struggled in Q2 and qualified a surprisingly low eleventh, along with Buemi, Liuzzi, de la Rosa, Hülkenberg, Kobayashi and Alguersuari.

Vettel set an astounding lap early on in Q3, being the only driver to get into the 1:23s, setting an unofficial lap record for the circuit. Rain began to fall in the final moments preventing anyone from mounting a challenge to Vettel. Schumacher had several off-track moments and qualified 7th, behind his team mate. Webber got himself on the front row to an all Red Bull front row. Button qualified quite well in 4th, sandwiched in between the two Ferraris of Alonso and Massa. 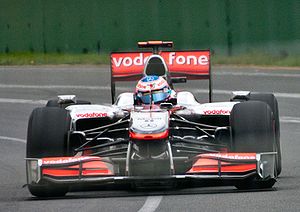 Jenson Button made an 'inspired' decision to change to slicks early on in the race; eventually going on to win the race.

After a short rainshower the event was declared wet shortly before the start, therefore allowing the drivers to change tyres from those they qualified on, with all opting to run on intermediates. Sebastian Vettel led comfortably into the first corner from pole, and Felipe Massa jumped up to second from fifth, pushing Mark Webber down to third. The first corner saw a tangle between second-row starters Fernando Alonso and Jenson Button at the first corner, with the Spaniard sent spinning, and rejoining at the tail of the field. Michael Schumacher was also caught up in the incident, and had to change his front wing. Kamui Kobayashi suffered another front wing failure on the approach to the sixth turn, the accident sending his BMW Sauber rebounding off the barrier into the path of Nico Hülkenberg and Sébastien Buemi; the three drivers joined Jarno Trulli – who failed to start owing to an hydraulics problem – on the sidelines. The safety car was deployed following the accident with the race order being: Vettel, Massa, Webber, Robert Kubica, Rosberg, Button, Hamilton and Adrian Sutil. Soon after the race resumed, Bruno Senna also retired, the result of a hydraulic failure.

At the restart, Webber passed Massa to take second, and Hamilton also passed teammate Button. As the track dried out, Button was the first to make his stop on lap six, switching from the intermediate tyres to the soft options in an alternative strategy move, but shortly thereafter he ran wide at the third corner on his new slicks and it seemed like he switched his tyres too soon. But the track continued to dry out, and many of the other drivers followed suit, with the Red Bulls of Sebastian Vettel and Mark Webber notably staying out longer. After making up eight positions on the opening lap, Renault's Vitaly Petrov was caught out by the conditions, sliding off and beaching himself in a gravel trap. Red Bull's late tyre change had no big repercussions for Vettel, who maintained his lead (even though it was reduced), but Webber lost out badly, dropping from second to sixth.

The race order was completely shuffled after the round of stops; Vettel leading from Button whose tyre strategy yet worked and jumped him up to second, with Kubica third, followed by Rosberg, Massa, Webber, Hamilton, Rubens Barrichello, Pedro de la Rosa and the recovering Alonso. Having been forced to pit on the first lap to change his front wing, Schumacher struggled to make his way through the field, spending twenty laps trapped behind the Toro Rosso of Jaime Alguersuari. Elsewhere, Adrian Sutil retired with engine problems. Webber went off while battling with Hamilton, and rejoined eighth, behind Alonso who continued his charge up the field. Hamilton then started on a charge up the order, first taking fifth from Massa. 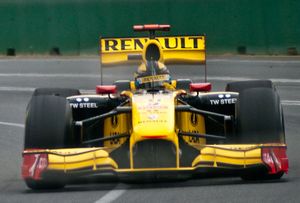 Button inherited the lead on lap twenty-five when Vettel suffered from what was believed at the time to be brake failure. It was later announced that he actually suffered from lost torque drive between the front left axle and wheel.[9] His Red Bull speared off the circuit and become trapped in the gravel on the outside of turn twelve. Lucas di Grassi was also sidelined a lap later with hydraulic problems. Webber meanwhile passed both Ferrari drivers and took fifth, whereas Hamilton overtook Nico Rosberg with a move around the outside at Turn 11, and then caught up to Kubica. Button, Kubica, Massa and Alonso all chose not to pit for a new set of tyres whereas Hamilton, Rosberg and Webber did so from third, fourth and fifth respectively. Hamilton reeled in both Alonso and Massa at a rate that was mostly over two seconds a lap, bringing Webber along with him, but tyre degradation meant that he struggled to pass. The struggle came to a head on lap 56 when Hamilton attempted to go around the outside of Alonso on the approach to turn twelve, but the Spaniard blocked him and as Hamilton re-took the racing line, he was hit from behind by the pursuing Webber. Hamilton recovered, but Webber's nose cone was damaged and he was forced to pit for another one. Webber later received a reprimand from the race stewards for his role in the incident.[10]

Button went on to win the race by twelve seconds from Kubica, with Massa taking the third place on the podium and Alonso finishing fourth to retain his championship lead. Mercedes' Rosberg took advantage of the Hamilton-Webber incident to claim fifth, with Hamilton himself crossing the line in sixth position. Vitantonio Liuzzi finished in seventh place, a minute behind Button, with Barrichello eighth and Webber ninth after his forced pit stop. Schumacher eventually found a way past Alguersuari and BMW Sauber's Pedro de la Rosa to take tenth and the final championship point. Heikki Kovalainen and Karun Chandhok were the only drivers of the new teams to finish the race; Kovalainen's Lotus was thirteenth, two laps down, and Chandhok's Hispania was the final classified finisher, five laps adrift of Button.

1.^ – Jarno Trulli attempted to start the race from the pit lane after his Lotus suffered a hydraulic fault on the grid, but the team were unable to rectify the problem and Trulli did not start.[13]
2.^ – Virgin Racing nominated to start their drivers from pit lane after replacing the fuel collectors on their cars after issues in qualifying forced them to run with more fuel than would be ideal.[14]