The race was won by Fernando Alonso, his first as a Ferrari driver.[2] His new teammate, Felipe Massa ensured a good start to the year for the team by finishing second. McLaren driver Lewis Hamilton completed the podium by finishing in third position.

All of the race had been led by polesitter and Red Bull driver Sebastian Vettel, until lap 33 when a gearbox problem forced him to concede the lead to Alonso. This meant that he was eventually overtaken by Massa and Hamilton too, meaning that he finished in fourth place. Vettel's teammate, Mark Webber qualified sixth before finishing the race in eighth place. Michael Schumacher's first race of his return to Formula One for the Mercedes resulted in him finishing sixth, one place behind teammate Nico Rosberg. Reigning world champion Jenson Button completed his first race for the McLaren team by finishing seventh.

The three new teams – Lotus, Hispania and Virgin – did not have a very successful debut race. Their six cars occupied the last six places in qualifying, and only one, the Lotus of Heikki Kovalainen, finished the race, although Jarno Trulli's Lotus was also classified in last place. As a consequence of the race, Fernando Alonso and Ferrari led their respective championships with maximum points.

The race saw the debut of three new teams: Hispania, Virgin and the new Malaysian-owned Lotus (not a direct descendent to Team Lotus, even though it is part owned by the same company which at present owns Lotus Cars), as well as the return of Mercedes after Daimler AG's take over of Brawn GP after the end of the 2009 season, and of Sauber, having competed as BMW the previous year. New drivers Nico Hülkenberg, Karun Chandhok, Bruno Senna, Lucas di Grassi and Vitaly Petrov also take part in their maiden races. Hülkenberg joined Williams, Petrov joined Renault and di Grassi became part of the Virgin team, while Hispania had an all-rookie line-up of Senna and Chandhok. Petrov became Russia's first ever Formula One World Championship driver; Chandhok became India's second following Narain Karthikeyan; Senna is a nephew of the legendary three-time Formula One world champion Ayrton Senna. 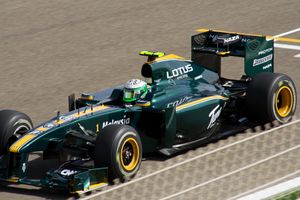 Lotus Racing was one of three new teams to debut in Bahrain.

2009 World Champion Jenson Button made his debut for McLaren after changing teams from 2009 Constructor's Champions Brawn in November 2009. Seven-time World Champion Michael Schumacher made his return to Formula One with Mercedes, Felipe Massa returned for Ferrari after his head injury at the 2009 Hungarian Grand Prix, and Timo Glock returned with the Virgin team following his accident at the 2009 Japanese Grand Prix.

All the previous winners of the event were present: Jenson Button won the 2009 Bahrain Grand Prix, with the Ferrari pair of Fernando Alonso and Felipe Massa were both two-time winners at this circuit. Schumacher won the first event in 2004.

The race also saw a return to the banning of refueling of the cars during the race, a practice which had been allowed since the 1994 Formula One season. Additionally a new points scoring system to decide the World Drivers' Championship was implemented, the most radical revamp of the system since the formation of the World Championship in 1950. Race winning drivers will now score more than double the number of points previously allocated with points distributed further down the list of finishers. The proportions of points available to winners are higher.

The race was also the first to feature a revised stewards' panel under new FIA regulations, featuring a former Formula One driver. The driver in Bahrain was four-time World Champion Alain Prost.[3] 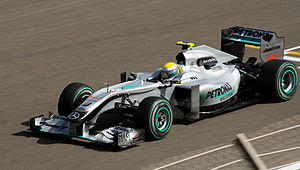 Adrian Sutil set the fastest time for the Force India team in the first session of free practice on Friday morning. Fernando Alonso (Ferrari) was second, ahead of Robert Kubica (Renault), Felipe Massa in the other Ferrari, and the two McLaren drivers, Jenson Button and Lewis Hamilton. On his return to Formula One, Michael Schumacher set the tenth-fastest time for Mercedes, two positions behind teammate Nico Rosberg. Of the new teams, both Lotus drivers and Timo Glock set times, but Lucas di Grassi did not complete a full lap in the second Virgin car. The Hispania team was still completing its two chassis when the session started, but Bruno Senna was able to complete two installation laps before it ended.[4]

In session 2 of free practice, Nico Rosberg set the fastest time, with Hamilton in second and Schumacher came third. Senna was struggling to match the pace of the fastest GP2 Asia Series drivers, but eventually did so, four seconds off the pace of the Virgins.[citation needed]

In the Saturday free practice session, Alonso in the Ferrari set the fastest time of 1:54.099, 0.269 seconds faster than Nico Rosberg in the Mercedes. Hispania's Karun Chandhok failed to participate in the practice session due to a hydraulic problem.[5] Elsewhere, the Virgin of Glock lost its left-front wheel in the middle of the session, with the problem being attributed to an under-torqued airgun.[6] 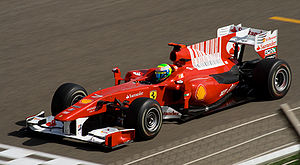 The first qualifying session saw the six drivers from the three new teams eliminated, with Timo Glock – the fastest of the newcomers – 2.7 seconds adrift of Jaime Alguersuari in eighteenth and the only driver from the established teams to be eliminated. Despite a crippling hydraulics problem that saw him unable to take part in any of the free practice sessions, Hispania's Karun Chandhok was able to qualify in 24th and last place with a lap time ten seconds slower than the fastest driver, Ferrari's Fernando Alonso.

Red Bull's Sebastian Vettel took pole late in the third session, edging out the Ferraris of Massa and Alonso, with 2008 World Champion Lewis Hamilton in fourth. Mercedes' Nico Rosberg and seven-time World Champion Michael Schumacher were fifth and seventh respectively, with Sebastian Vettel's Red Bull teammate Mark Webber splitting them. Jenson Button could only manage eighth place, while ninth and tenth were taken by Robert Kubica and Adrian Sutil in the remaining Renault and Force India.[7]

Fernando Alonso won on the occasion of his first race for the Ferrari team.

The first corner of the first lap saw Mark Webber's engine release copious amounts of oil smoke, triggering a sequence of events that saw Adrian Sutil and Robert Kubica spin around and fall to the back of the field. The first lap was otherwise clean, with Sebastian Vettel quickly coverting his pole position into the race lead. Fernando Alonso got past teammate Felipe Massa, to get second, and both Mercedes drivers also gained a place, with Nico Rosberg fourth ahead of Lewis Hamilton, and Michael Schumacher beating Mark Webber to sixth spot. There was little position-changing otherwise, with Vitaly Petrov in the second Renault the biggest mover, up to eleventh from seventeenth on the grid.

Massa, in his first race back after his accident in Hungary in 2009, finished second behind new teammate Alonso to score Ferrari their first 1-2 finish since the 2008 French Grand Prix.

It was a race of attrition, with the first major incident of the race being the retirement of Hispania's Karun Chandhok, who, after just a handful of laps in qualifying, hit a bump he did not know existed and retired with a damaged front wing. Virgin Racing's Lucas di Grassi joined him on the sidelines shortly thereafter when his Virgin VR-01's hydraulics — a chronic problem throughout the off-season — gave up. Fellow rookie Nico Hülkenberg was lucky to avoid a similar fate to Chandhok when he missed a corner on the run down to turn seventeen and skipped over the circuit. Sauber's Kamui Kobayashi fell victim to hydraulic failure, and was joined a lap later by Petrov who damaged his front-right suspension when he hit a kerb too hard; at the time of his retirement, Petrov had been the highest-placed rookie and had been racing Rubens Barrichello for tenth place and the final championship point on offer. Renault later clarified the issue as being an unanticipated mechanical fault on both cars that was traced back to Petrov's preference for a lower ride height than teammate Kubica who went unscathed. Timo Glock in the second Virgin also retired after losing third and fifth gears, while Bruno Senna's debut for Hispania ended when his engine overheated at the end of the main straight. The six drivers retired during the first seventeen laps. At the front, Vettel and the two Ferraris quickly pulled out a sizeable gap to the rest of the field. 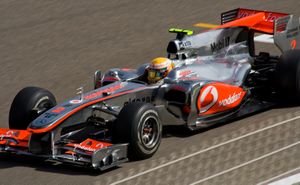 The first round of pit stops also proved to be the only round of stops, with Vettel stretching out enough of a lead to prevent the Ferraris from leap-frogging them. Elsewhere, good work from the McLaren crew allowed both their drivers to gain a place in the stops; Hamilton on Rosberg, and Jenson Button on Webber. The list of retirements grew on lap 23 when Pedro de la Rosa in the second BMW Sauber was also struck by a hydraulic issue.

Vettel continued to lead comfortably, two seconds ahead of Alonso and a further three ahead of Massa. However, he began to notieceably slow down during the latter part of the race due to a problem that was later identified within the team as a problem with a spark plug, and was quickly passed by the two Ferraris and Hamilton, and spent the rest of the race trying to hold Rosberg at bay. Alonso went on to win the race, joining Juan Manuel Fangio, Giancarlo Baghetti, Mario Andretti, Nigel Mansell and Kimi Räikkönen as the only men to win for Ferrari on their debut. Massa finished second on his return to full-time racing after his injury at the 2009 Hungarian Grand Prix. Hamilton completed the podium, while Vettel successfully fended Rosberg off long enough to salvage fourth. Schumacher followed his teammate home for sixth, with Button seventh, Webber eighth, Vitantonio Liuzzi placing ninth and Barrichello claiming the final point on offer. Kubica recovered from his first-corner spin to claim eleventh while Sébastien Buemi and Jarno Trulli also retired; Buemi's Toro Rosso was struck by electrical issues, while Trulli added his name to the growing list of drivers taken down by hydraulics issues. As they each retired having completed 46 laps, they were classified as finishers as they completed ninety percent of the winner's race distance. Heikki Kovalainen finished fifteenth in the second Lotus, meaning that Lotus became the only entrant of the new teams to have a car finish the race.

There was criticism after the race of the "new" Formula One, with it being echoed by Formula One personalities. McLaren team boss Martin Whitmarsh stated that the F1 community had to "work together to improve it."[8] Former driver and BBC pundit David Coulthard said that two pitstops could be made mandatory as it "would also mean more potential for mistakes (and, by extension, spectator interest) in the pits." Coulthard was critical also of changes made by former FIA president Max Mosley, as the changes were made during his time in charge.[9]

One person to disagree with the criticism, though, was Alain Prost, who said that "after a few races, I am sure the good drivers, the top drivers, will like it [the new format]."[10]

The new section of the circuit used by Formula One for the first time also drew criticism from both drivers and fans alike, with most claiming the added corners offered little in the way of passing opportunities. For the next Bahrain Grand Prix in 2012, Formula One would revert to using the original Grand Prix Circuit.

1.^ – Both Sébastien Buemi and Jarno Trulli were classified as they had completed 90% of the winner's race distance.