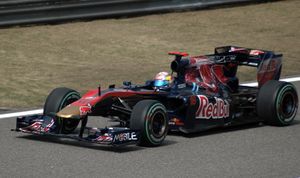 Sébastien Buemi had front suspension wishbone failure resulting in the loss of both front wheels.

The first session was marked by a spectacular accident when the front wheels of Sébastien Buemi's Toro Rosso simultaneously exploded free of their mountings on the approach to the turn fourteen hairpin. Team-mate Jaime Alguersuari was kept in the pits by the team as they investigated, which revealed that the accident was the result of the right front upright failing, causing the front-right wheel to break free. The front-left wheel followed suit when the left upright was suddenly forced to bear the entire load of the front end. The parts, new for the Chinese Grand Prix, were subsequently removed from both cars ahead of the second practice session.

Elsewhere, Fernando Alonso suffered a fiery engine failure after just five laps, preventing the Spaniard from completing a timed lap. Force India's Adrian Sutil was later reprimanded by the race stewards when the German set a personal best time through the first sector when the sector was under yellow flags on account of Alonso's stricken Ferrari. Mercedes' Michael Schumacher was also reported for a similar breach, but no action was taken after the stewards spoke to Mercedes team manager Ron Meadows.

While the second practice session passed without incident, Vitaly Petrov speared off the circuit at the final corner late in the third session, prompting the session to be red-flagged for several minutes while marshals cleared away the debris. Hispania's Karun Chandhok was issued a five-place grid penalty after the team broke a seal on his gearbox without an FIA official present. 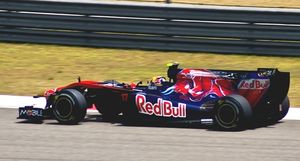 The first session of qualifying passed without incident as the six drivers from the three new teams (Timo Glock and Lucas di Grassi of Virgin, Jarno Trulli and Heikki Kovalainen of Lotus and Bruno Senna and Karun Chandhok of HRT) were knocked out as expected. Kovalainen had a spin early on where he snatched a brake heading into a corner, locked his wheels and spun off the circuit. They were joined in elimination by Force India's Vitantonio Liuzzi, who blamed traffic for his slow time.[3]

In the second session, most of the usual contenders were eliminated once again, with both Williams drivers (Rubens Barrichello and Nico Hülkenberg), both Toro Rossos (Jaime Alguersuari and Sébastien Buemi) and both Saubers (Kamui Kobayashi and Pedro de la Rosa) were joined by Vitaly Petrov's Renault. Michael Schumacher was almost eliminated, just squeezing through in the final seconds by about 3 hundredths of a second, at the expense of Barrichello. Hülkenberg blamed a mistake at the last corner for his lowly grid position, compared to fifth in the previous race.[3]

The final qualifying session saw lower grid positions than expected for several drivers, including the Germans Michael Schumacher and Adrian Sutil, who came 9th and 10th respectively. The Force India man, however, seemed happy with his grid slot. He said, "Another Q3 qualifying... I think we can be very pleased."[3] The Mercedes driver, by contrast, was less pleased, claiming that he struggled with rear grip, a problem that he had been having problems with all weekend.[3] Robert Kubica did well in the Renault to qualify eighth, just behind the Ferrari of Felipe Massa, who was another driver unhappy with his performance. He also blamed a final corner mistake.[3] The McLarens of Jenson Button (5th) and Lewis Hamilton (6th) both underachieved compared to expectations after practice. Team principal Martin Whitmarsh also said that he expected his drivers to do better.[3] Nico Rosberg did very well to qualify fourth in the second Mercedes, and the other Ferrari of Fernando Alonso also performed well, qualifying third. However, it was the Red Bull cars of Sebastian Vettel and Mark Webber who stole the show, locking out the front row of the grid. Vettel stole the pole position from team-mate Webber by three tenths of a second in the closing moments of the session. Christian Horner, Red Bull sporting director described Vettel's lap as "phenomenal", and was delighted at the fourth consecutive Red Bull pole.[3]

The race started under conditions classified as "light rain",[4] with several drivers gambling on a wet set up in anticipation of heavier rain. Timo Glock was forced to start from pit lane alongside team mate Lucas di Grassi after the team failed to lower him from the front jack on the grid in time for the warmup lap. Glock was returned to the pits, but never started after an engine failure manifested itself. Hispania's Karun Chandhok also started from the pits after the team changed parts overnight. 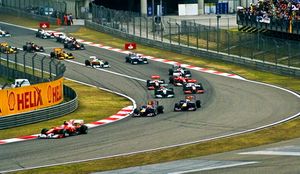 The first lap was marked by Ferrari's Fernando Alonso shooting into the lead from third on the grid, beating the front-row starting Red Bulls of Mark Webber and polesitter Sebastian Vettel. However, replays showed that he clearly jumped the start, for the first time in his career, and earned himself a drive-through penalty. Elsewhere, there was an incident at turn six, when Force India's Vitantonio Liuzzi spun under braking and launched himself backwards into the Sauber of Kamui Kobayashi, who joined Timo Glock as the second driver to retire from every race thus far in 2010. Sébastien Buemi was also eliminated in the accident, while Williams' Nico Hülkenberg was forced to take evasive action to avoid being knocked out himself. The accident saw the deployment of the safety car and the first round of pit stops for intermediate tyres as the rain intensified. Mercedes' Nico Rosberg, reigning World Champion Jenson Button and the Renaults of Robert Kubica and Vitaly Petrov opted to stay out, filling the first four positions on the track. Lotus' Heikki Kovalainen also stayed out and ran as high as sixth place, the first time one of this year's new teams had run in a points-scoring position all season. Di Grassi retired on lap 8 with clutch failure.

Although the intermediate tyres initially provided an increase in speed, the rain did not intensify and every driver running on them was forced to pit again, giving Rosberg, Button, Kubica and Petrov a healthy buffer. Meanwhile, championship contenders Sebastian Vettel, Lewis Hamilton, Fernando Alonso and Mark Webber were forced to carve their way through the field. As the forecasted rain approached, the pit lane became a scene of further drama, with Alonso and Massa racing for position at the pit lane entrance, while Hamilton and Vettel were released from their pit bays – next to one another – at the same time, resulting in the two cars driving side-by-side the length of the lane before Hamilton yielded. Both drivers were reprimanded by the stewards, though no further action was taken. On lap 19, a mistake on the back part of the circuit saw Button reel Rosberg in, with the World Champion taking the lead on the back straight.

Pedro de la Rosa experienced no luck after retiring in the early laps whilst running in sixth.

The advantage of Button, Rosberg and Kubica – Petrov gradually fell off the pace to be within striking distance of the more experienced competitors – was negated when Jaime Alguersuari had an encounter with a backmarker that damaged his front wing. As he pitted for a new nose cone, the wing fell off, scattering debris across the circuit and forcing the safety car to be deployed once again. The top ten when the safety car was introduced were: Button, Rosberg, Kubica, Petrov, Michael Schumacher, Webber, Hamilton, Vettel, Adrian Sutil and the recovering Alonso. Championship leader Felipe Massa was down in 12th. When the safety car withdrew, Button was given control of the field between the safety car's exit and the start/finish line. Button slowed to a near halt at the bottom hairpin, bunching the field up and causing controversy when Mark Webber was forced off the circuit at the final bend. As the lead driver has the right to drive as fast or as slow as he chooses when he gains control of the race, no action was taken. Webber, quite furious, lost 6 places and rejoined 12th. 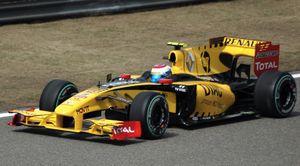 At the restart, there was immediate mayhem and action. Hamilton eased by Schumacher on the inside at the sixth turn, and soon went after and passed Petrov as well. Vettel made a mistake going into the first turn lost out to Sutil and Alonso. Hamilton was on the charge, passing Kubica for third, and started to close in on second-placed Rosberg. Sutil then passed Schumacher on the back straight, but soon both of them were passed by a charging Alonso and Vettel. Vitaly Petrov had a spin at turn ten that let Alonso and Vettel through. Alonso and Vettel now started to reel in fourth-placed Kubica. Hamilton passed Rosberg with the same manoeuvre with which he embarrassed Schumacher, but Rosberg did not take that lying down, and passed him back on the next turn to reclaim the position. The final round of pitstops took place, and Hamilton was able to jump Rosberg. Similarly, Alonso came ahead of Kubica.

The final phase of the race was run under increasingly heavy rain across the back part of the circuit, as a dry line started to appear along the main straight. As the front runners finally fell into an established running order, Petrov became the fastest driver of the final phase as his preservation of his tyres allowed him to power past Alguersuari, Schumacher and Webber in the final ten laps. Felipe Massa finally got himself into the points by passing Jaime Alguersuari for tenth. 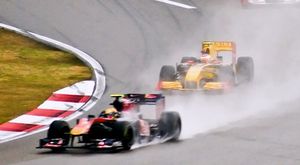 The race saw rain, and most of it was run on intermediate tyres.

Button won the race, becoming the first repeat winner of the 2010 season, continuing the Chinese Grand Prix's record of producing a different winner each year and claiming the championship lead. Hamilton crossed the line second, giving McLaren their first one-two since the 2007 Italian Grand Prix. It was the first 1-2 by two British drivers since the 1999 Austrian Grand Prix, where Eddie Irvine won ahead of David Coulthard, and the first 1-2 by two English drivers since the 1969 Monaco Grand Prix, where Graham Hill won ahead of Piers Courage.[5] Nico Rosberg salvaged the final podium position for the second race in succession in his Mercedes to take second in the championship, ten points behind Button. Mercedes-engined cars filled the first three placings for the first time since the 1955 British Grand Prix,[5] an event where the first four cars home were Mercedes works entries. Alonso, Kubica and Vettel claimed fourth, fifth and sixth, while Petrov's late moves saw him finish seventh, scoring his and Russia's first World Championship points ever.[5] Webber limped home to eighth on worn tyres, while Massa stole ninth from former team-mate Schumacher. Heikki Kovalainen was the best of the new teams, bringing his Lotus home in fourteenth place ahead of Hülkenberg – the first time in 2010 that a new team had finished ahead of an established one on the track – and the two Hispanias, Bruno Senna beating team-mate Chandhok by two laps.

1.^ – Karun Chandhok was given a five-place grid penalty after the team broke one of the seals on his gearbox without an FIA steward present, though he then qualified in 24th position. This meant that it was effectively no penalty as he had qualified last. He also started from the pitlane.[7]