The 2011 Paris–Nice was the 69th running of the Paris–Nice cycling stage race, often known as the Race to the Sun. It started on 6 March in Houdan and ended on 13 March in Nice and consisted of eight stages, including a time trial. It was the second race of the 2011 UCI World Tour season.

The race was won by HTC–Highroad rider Tony Martin, after holding onto the leader's yellow jersey which came from a time trial stage win on stage six.[1][2] Martin's winning margin over runner-up and fellow German Andreas Klöden (Team RadioShack) – winner of the fifth stage of the race – was 36 seconds, with Team Sky's Bradley Wiggins completing the podium, 41 seconds down on Martin.

In the race's other classifications, Rein Taaramäe of Cofidis won the white jersey for the highest placed rider under the age of 25, and Garmin–Cervélo's Heinrich Haussler took home the green jersey for amassing the highest number of points during stages at intermediate sprints and stage finishes. FDJ rider Rémi Pauriol won the King of the Mountains classification, with Team RadioShack finishing at the head of the teams classification. 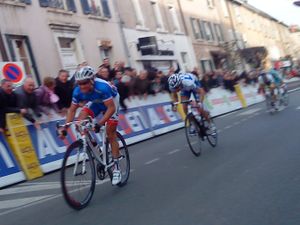