The 2011 Tour de France was the 98th edition of the race. It started on 2 July at the Passage du Gois and ended on the Champs-Élysées in Paris on 24 July. The cyclists competed in 21 stages over 23 days, covering a distance of 3,430 kilometres (2,130 mi). The route entered Italy for part of two stages, including an overnight stop.

Australian Cadel Evans won the race, having gained the lead in a time-trial on the penultimate day. He became the first Australian to win the race, and at 34, the oldest post-war winner.[4] The de facto winner of the previous edition, Andy Schleck of Luxembourg, was second, and his brother Fränk Schleck third. Mark Cavendish was the first British winner of the points classification, Pierre Rolland won the young rider competition and Samuel Sánchez of Spain won the mountains category.

New rules were adopted for the 2011 Tour regarding the points classification and King of the Mountains competitions.

Previously, stages classified flat had three intermediate sprint points worth 6, 4, and 2 points to the first three riders across the line. Starting in 2011, flat stages have just one intermediate sprint, but it is now worth 20 points to the first rider across the line, and the first 15 score points. The intention is to have green jersey favourites needing to sprint twice during the day to score well.[5] Points awarded at the finish of flat stages also increased, from 35 points for the winner in 2010 to 45.[6] Medium mountain stages award 30 points to the winner, high mountain stages and the individual time trial 20 points.[7]

Previously in the mountains classification, any hors catégorie, first-category, or second-category climb awarded double points if it was the last of the day. In 2011, only the summit stage finishes awarded double points, specifically stage 12 ending at Luz Ardiden, stage 14 at the Plateau de Beille, stage 18 at the Col du Galibier, and stage 19 at L'Alpe d'Huez. Previously the first eight riders across a first-category climb scored points, as well as the first six across a second-category and the first four across a third-category. The new points schedule for the mountains classification is:

Main article: List of teams and cyclists in the 2011 Tour de France

All 18 teams in the UCI's Proteam category were entitled, and obliged, to enter the race. Four UCI Professional Continental teams, all French-based, were also invited.[10]

2010 winner Alberto Contador was suspended from cycling during a doping investigation from September 2010 to February 2011, during which time 2010 runner-up Andy Schleck was regarded as the favourite. When the suspension was lifted, Contador declared his desire to compete in both the Tour and the 2011 Giro d'Italia, which he went on to win. Of the others listed among the favourites, Denis Menchov is a member of the Geox–TMC team, who were not invited to participate.

Classics specialist Philippe Gilbert took the first yellow jersey, winning the opening stage in the Vendée,[11] but on the second day Garmin–Cervélo were the fastest on the team time trial, allowing Thor Hushovd[12] to take the race leadership, which he retained for seven days. The first week and a half was notable for the number of crashes involving high profile riders, with Andreas Klöden, Bradley Wiggins, Alexander Vinokourov, Janez Brajkovič, Chris Horner and Jurgen Van den Broeck all having to withdraw injured, while Robert Gesink, Alberto Contador, Samuel Sánchez and Levi Leipheimer all lost considerable amounts of time and condition due to falls. There was controversy when Nicki Sørensen was struck by a motorbike carrying a photographer, and Johnny Hoogerland and Juan Antonio Flecha were injured after an incident with a television car. A breakaway on stage nine saw Thomas Voeckler gain the overall lead,[13] which he kept, contrary to expectation, through the Pyrenean and all but one of the Alpine stages, and for ten racing days in total. 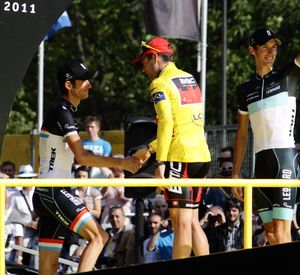 On the winners' podium in Paris, Cadel Evans (centre) shakes hands with Fränk Schleck while Andy Schleck waves to the crowd

The key time differences between the riders who eventually took the top three places in the general classification, Cadel Evans of BMC Racing Team, Luxembourger Andy Schleck, and his older brother and Leopard Trek teammate Fränk, occurred on stage 16, when Evans gained 21 seconds on Fränk Schleck and 1'09" on Andy on the descent to Gap in wet conditions;[14] stage 18, when a 60 km breakaway by Andy Schleck gave him an advantage of more than two minutes at the highest stage finish in tour history at the Col du Galibier;[15] and on the penultimate day, when Evans came second in a time trial and beat the Luxembourgish pair by more than two and a half minutes to secure victory.[16] Both Andy Schleck and Evans wore the yellow jersey for only one day each: Schleck for the time trial, and Evans on the final, largely ceremonial, stage in Paris.

The stages that were suited to sprint finishes were dominated by Manx sprinter Mark Cavendish, who won five stages, including a record third successive victory on the final stage on the Avenue des Champs-Élysées in Paris. In doing so, he won the points category, ahead of José Joaquín Rojas and Philippe Gilbert, becoming the first British rider to claim the maillot vert.[17][18]

The mountains category was won by Spaniard Samuel Sánchez, who had a win and two second places on the four mountain-top finishes. Andy Schleck finished second in that category, with Belgian Jelle Vanendert third.[19]

Pierre Rolland won the young riders category, largely by virtue of positions he attained in supporting his team leader, Voeckler, during the time he held the yellow jersey, but he also earned a stage win on the prestigious climb to Alpe d'Huez.[20]

There was also a mountains classification. The organization categorized some climbs as either hors catégorie, first, second, third, or fourth-category; points for this classification were won by the first cyclists that reach the top of these climbs, with more points available for the higher-categorized climbs. The cyclist with the most points led the classification, and was identified with a polka dot jersey.[24]

For the team classification, the times of the best three cyclists per team on each stage were added; the leading team is the team with the lowest total time. The riders in the team that lead this classification were identified with yellow numbers.[25]

For the combativity award, a jury gives points after each stage to the cyclists they considered most combative. The cyclist with the most votes in all stages leads the classification.[25]

After the race finished, the results from Alberto Contador were removed. Contador had originally finished in fifth place, 3'57" from Evans. In the points classification, Contador was tenth with 105 points, and in the mountains classification Contador was sixth with 51 points.[27] 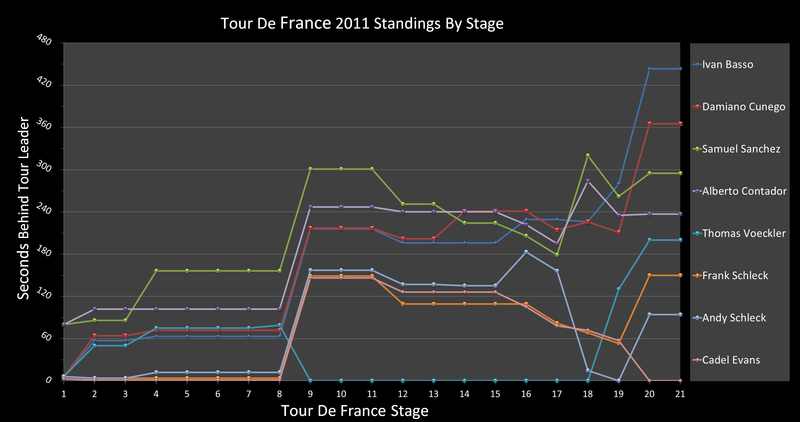 The Tour de France was one of 27 events throughout the season that contributed points towards the 2011 UCI World Tour. Points were awarded to the top 20 finishers overall, and to the top five finishers in each stage. Only riders on UCI ProTour teams were eligible to receive rankings points.[28]

In total, more than €3.5 million was distributed during the Tour. Initially, each team received €51,243, while each team with at least seven riders finishing the Tour received €1600 per rider. The winner of the General Classification received €450,000, with smaller prizes for each finishing position, down to €400 for the last rider.[8]

The stage winner was awarded €8,000 on a normal stage and €10,000 for a time trial. The money gradually decreases, with the 20th finisher receiving €200. The first person to cross the intermediate sprint wins €1,500. Money is also awarded for crossing the categorized climbs, for the best young rider of each stage, the most combative rider, and the best team of the stage.[8]

After the fifth stage, Alexandre Kolobnev tested positive for hydrochlorothiazide. When the news came out, he withdrew, and his results were annulled. In March 2012, the CAS decided that Kolobnev would only receive a warning for this, and no suspension, because his use of the drug was justified by 'medical reasons unrelated to performance'.[32]

All other doping tests were negative.[32]