The 2011 Vuelta a España was held from 20 August to 11 September. The race began in Benidorm with a team time trial and ended, as is traditional, in Madrid. The 2011 Vuelta was the 66th edition of the race and was the first Vuelta in 33 years that visited the Basque Country. The 33-year absence of the region was due to fear of political protests.[1]

Critics claim that it was a race well suited for the climbers due to the minimum time trial kilometers and lots of climbing kilometers. 9 of the 21 stages are ranked as Mountain Stages. 6 of them have mountain top finish (including the very steep uphill finish on the Alto de L'Angliru). Two other stages had steep uphill finishes, both of which were won by Katusha leader Joaquim Rodríguez.[2]

This year's Vuelta saw the introduction of a combativity award in much the same way as the Tour de France. The most combative rider each stage is awarded a red backnumber which he wears for the next stage.

The race was won by a surprisingly strong Juan José Cobo with a small margin over Briton Chris Froome.[3] Both riders were not marked as favourites before the race and went to the Vuelta as domestiques for their team leaders Denis Menchov and Bradley Wiggins, who finished 5th and 3rd respectively. Cobo also went home with the Combination Classification. The King of the Mountain competition was won for the fourth consecutive time by Frenchman David Moncoutié.[4] The points classification was won by Dutch rider Bauke Mollema, who also finished fourth overall.

All 18 teams in the UCI's Proteam category are entitled, and obliged, to enter the race. Four UCI Professional Continental teams are also invited.[5]

For more details, see List of teams and cyclists in the 2011 Vuelta a España. 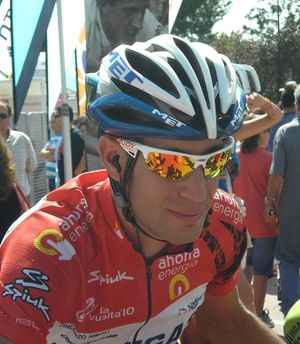 2010 winner Vincenzo Nibali of the Liquigas–Cannondale team, was seen as the top-favourite.

2010 winner Vincenzo Nibali came to defend his Vuelta title and was seen as the top-favourite due to the better time-trial skills than climbers as Igor Antón, Joaquim Rodríguez and Michele Scarponi. Anton seemed to be the strongest climber in the 2010 race, but due to a crash he had to withdraw from the race. Ezequiel Mosquera did not start the race, the 2010 runner-up being suspended from racing by his team Vacansoleil-DCM due to an ongoing doping investigation.[6]

Two other Grand Tour winners in the Vuelta peloton were: Carlos Sastre (winner of the 2008 Tour de France) and Denis Menchov (two time winner of the Vuelta and winner of the 2009 Giro d'Italia). Both riders of the Geox-TMC were looking for better results after disappointing Giro campaigns. Sastre finished in thirtieth place, while Menchov finished eighth. Menchov had allergies and physical problems at the Giro d’Italia and was looking for a third Vuelta win. The Russian could count on one of the best team supports in the mountains with climbers as Sastre, Cobo and Duarte.[7]

Other favourites for the podium had a disappointing Tour de France and were looking for revenge in the Vuelta. Janez Brajkovič, Bradley Wiggins and Jurgen van den Broeck crashed out of the Tour in the first week while Andreas Klöden withdrew from the race a week later, also due to injuries of a crash. Wiggins showed extremely good form before the Tour and was seen as a podium candidate for the Tour. His top time-trial skills, together with his improved climbing skills, made him a favourite for the Vuelta victory.[8]

The full route for the 2011 Vuelta was unveiled in Benidorm on January 12, 2011. The climbers immediately liked the route of the race with six mountain stages with uphill finishes and another two flat stages with steep uphill finishes.[11] Among the uphill finishes were the infamous Alto de L'Angliru and the climb to the Sierra Nevada. Two finishes were on climbs that have never been featured in the Vuelta before. These are to Estacion de Montaña Manzaneda in Galicia on stage 11 and La Farrapona in the Asturias region on stage 14. Olympic Road Champion Samuel Sánchez pointed out that the lack of Time Trial kilometers make the race very interesting because there are not enough of them for GC riders with good time trialing ability to take advantage for the variety of mountain stages.

It was the first Vuelta since 33 years that visited the Basque Country. The 33-year absence of the region was due to fear of political protests. Separatists of the Basque Country were unhappy with the return of the Vuelta and calling the come of the Vuelta 'A Waste of Money'.[12] Although the criticism of several Separatists on the route of this year, the organizers of the Vuelta announced on 8 September that the 2012 event will start in the Navarrese city of Pamplona.

The Vuelta began with a team time trial in Benidorm. The Leopard Trek squad won this stage. Danish General Classification contender Jakob Fuglsang passed the finish line as first and was the first cyclist to wear the red leaders jersey.[13] Fuglsang lost the leaders jersey after just one day to team-mate Daniele Bennati in a sprinter's stage which was won by Christopher Sutton of Team Sky.[14]

Stage 3 saw the first victory out of a break-away. Out of this break-away it was Pablo Lastras (Movistar Team) who attacked on the last climb and held a small margin until the finish line in Totana. Runner-up of the stage, Sylvain Chavanel (Quick-Step), was the third cyclist who was awarded the red leaders jersey.[15]

No serious attacks were made by the GC contenders on the first mountain stage of the Vuelta. On the climb to the Sierra Nevada it was Daniel Moreno (Team Katusha) who attacked with Chris Anker Sørensen (Saxo Bank–SunGard) and who beat the Danish climber in the sprint. Chavanel was the first rider who was awarded the leaders jersey two days in a row.[16]

Igor Antón (Euskaltel–Euskadi) won in the 2009 Vuelta a España the stage on the steep ascend of Valdepeñas de Jaén. The Basque lost lots of time on stage 4 and showed no good form in the Vuelta.[17] He couldn't repeat his stage victory. Joaquim Rodríguez (Team Katusha), a specialist on very steep hills, won the stage before the surprisingly strong Dutchman Wout Poels (Vacansoleil–DCM) and team-mate Daniel Moreno. Leader Chavanel lost several seconds but managed to keep the lead in the race.[18]

The Liquigas team of Vincenzo Nibali rode a strong descent in the final of stage 6 and managed to form a small break-away with four Liquigas riders and former stage winner Lastras. From the four Liquigas riders Peter Sagan took his first Grand-Tour victory. Nibali failed to gain bonification seconds due to miscommunication within the team. The 2010 winner took sixteen seconds on his direct concurents for the overall victory.[19] The next day Sagan sprinted again for the stage victory but couldn't beat German talent Marcel Kittel (Skil–Shimano) in a sprint which was characterized by a huge crash of American sprinter Tyler Farrar (Garmin–Cervélo) in which he didn't suffer any serious injuries.[20]

The Vuelta was one of 27 events throughout the season that contributed points towards the 2011 UCI World Tour. Points were awarded to the top 20 finishers overall, and to the top five finishers in each stage. Only riders on UCI ProTour teams were eligible to receive rankings points, so winner Juan Cobo was not rewarded in this table.[21]