The 2012 UEFA Champions League Final was a football match which took place on Saturday, 19 May 2012 between Bayern Munich of Germany and Chelsea of England at the Allianz Arena in Munich, Germany. The match was to decide the winner of the 2011–12 season of the UEFA Champions League, Europe's premier club football tournament. Bayern were making their ninth appearance in the competition's final, having won four and lost four, most recently losing in 2010. Chelsea were appearing in their second final, having lost their last in 2008.

It was the first Champions League final to be held at the Allianz Arena (known as Fußball Arena München for the final). As tenants of the Arena, this meant Bayern were the first finalists to have home advantage since 1984. Both teams progressed to the knockout stages by finishing top of their group. Bayern then beat Basel, Marseille and Real Madrid to reach the final, while Chelsea knocked out Napoli, Benfica and defending champions Barcelona.

Bayern took the lead late in the second half through Thomas Müller, but Didier Drogba equalised for Chelsea five minutes later to take the game to extra time, in which Arjen Robben missed an awarded penalty, Petr Čech saving the low drive. The teams stayed level at 1–1 and the match went to a penalty shoot-out, which Chelsea won 4–3 to clinch their first Champions League title. In doing so, they became the first London club to win the tournament, the fifth English club and 22nd overall.

As winners, Chelsea took part in the 2012 UEFA Super Cup, losing 4–1 to Atlético Madrid, the winners of the 2011–12 UEFA Europa League. The victory also allowed them to enter the following season's Champions League competition (having failed to qualify for it by their league finishing position) at the expense of fellow London team Tottenham who would otherwise have entered the competition having finished fourth in the Premier League. Chelsea also represented UEFA at the 2012 FIFA Club World Cup, entering at the semi-final stage; however, they were beaten 1–0 by Corinthians in the final. 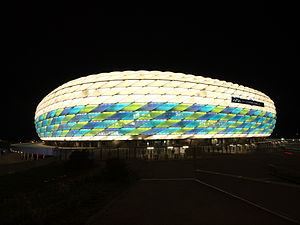 The Allianz Arena was announced by UEFA as the venue of the 2012 final on 30 January 2010, although the stadium was referred to as "Fußball Arena München" for the match, as UEFA does not recognise sponsorship by companies that are not among its partner organisations.[6] The stadium, which opened in 2005, is the home stadium of both Bayern Munich and 1860 Munich, and was used for six matches at the 2006 FIFA World Cup including the opening match.

The stadium was hosting its first major European final. The Olympiastadion in Munich, the previous home of Bayern Munich and 1860 Munich, hosted three European Cup finals, in 1979, 1993 and 1997.[7] On each previous occasion, a European Cup final held in Munich had produced a first-time winner of the competition (Nottingham Forest, Olympique Marseille and Borussia Dortmund).[8]

During the match, the stadium was illuminated in green and turquoise to represent the official UEFA emblem of the Munich final, as the outer shell of the Allianz Arena can change colour.[9]

To reach the final, in the knockout phase Bayern defeated Basel, Marseille, and Real Madrid (3–1 on penalties after a 3–3 aggregate score),[10] while Chelsea overcame Napoli, Benfica, and the defending champions Barcelona (3–2 on aggregate).[11]

Both teams reached the final having already lost out in their domestic leagues (the Bundesliga and Premier League respectively), but having also reached the final of their domestic cup competitions (the DFB-Pokal and FA Cup respectively), to be played prior to the Champions League Final. Chelsea won the FA Cup by defeating Liverpool 2–1,[12] while Bayern lost the Final of the DFB-Pokal 2–5 to Borussia Dortmund.[13]

The match marked the fourth time that a team had played at their home ground in the history of the European Cup, after 1957, 1965 and 1984, and the first time since the tournament was rebranded to the UEFA Champions League. For this reason, fans of Bayern Munich called the match "Finale dahoam" (Bavarian for "final at home"). This was the first time since 2007 that neither of the participants were champions of their domestic league. This was the sixth time that an English side and a German side had met in a European Cup/Champions League final; the other occasions were 1975, 1977, 1980, 1982 and 1999. It was also Bayern's fourth time facing an English side in the European Cup/Champions League final, having won in 1975 vs. Leeds United and lost in 1982 vs. Aston Villa and 1999 to Manchester United.

For more details on this topic, see 2011–12 UEFA Champions League.

The two teams each received 17,500 tickets to distribute to their supporters. A further 7,000 tickets were available for sale to fans worldwide via UEFA.com, with prices between €70 and €370. The remaining tickets were allocated to the local organising committee, UEFA's 53 national football associations, and commercial and broadcast partners.[15]

Former German player Paul Breitner was named as the ambassador for the final.[16]

The UEFA Champions Festival was held at Munich's Olympiapark from 16–19 May.[17] An official public screening of the final took place at the Olympiastadion during the match,[18] with capacity for 65,000 fans, including a section for Chelsea supporters.[19] A second public screening was planned on the Theresienwiese, where the famous Oktoberfest takes place.[20] 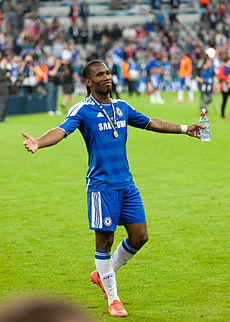 Didier Drogba scored the equalising goal and the winning penalty.

Both clubs had players missing due to suspensions; Bayern were missing David Alaba, Holger Badstuber and Luiz Gustavo, while Chelsea were without Branislav Ivanović, Raul Meireles, Ramires and John Terry.[21][22] John Terry was suspended after being red-carded in the semi-final, which automatically excludes a player from the final. The other six all received yellow cards in the semi-finals, which took them over the limit of a third yellow card of the competition, which triggers an automatic suspension from the next match. Players union FIFPro appealed to UEFA to allow the players with yellow cards to play, seeing the punishment of "missing the match of your life" as too harsh; UEFA rejected the appeal and stated the rule would not be reviewed for at least three years.[23] Ivanović stated how he "had no idea [he] was one booking away from missing the Champions League final."[24] UEFA confirmed that Chelsea captain Terry would be allowed to lift the trophy should Chelsea win, in spite of his suspension.[25]

Only two of the 36 players had previously been in a winning squad in a Champions League Final: Chelsea's Paulo Ferreira and José Bosingwa were in the Porto squad in 2004. Ten of the Bayern 18 had earlier been in their squad that lost the 2010 final, although only four started both games: Philipp Lahm, Bastian Schweinsteiger, Arjen Robben and Thomas Müller. Eight of the Chelsea squad had been in their losing 2008 squad, including four who started both games: Petr Čech, Ashley Cole, Frank Lampard and Didier Drogba.

Frank Lampard and Ashley Cole would join Carlos Mozer as the only players to score in penalty shoot-outs in two European Cup/Champions League finals. Mozer had scored for Benfica in 1988 and for Marseille in 1991, losing both times. 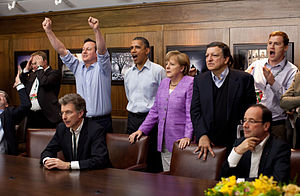 Bayern Munich had control for most of the match, with Robben having the best chance, which Čech deflected onto the frame of the goal with his legs. Chelsea, however, also had chances, with Kalou nearly finishing at the near post. Bayern kept pushing Chelsea to the limit but missed sitters from Gómez, who sent his shot over the bar; and Robben, who was blocked at the last second by Gary Cahill. Bayern took the lead in the 83rd minute, when Toni Kroos crossed in to Müller, who headed the ball down into the ground, causing it to bounce over Čech and in off the crossbar. Bayern took Müller off and replaced him with Daniel Van Buyten in an attempt to shore up the defence, but on 88 minutes Didier Drogba was first to a Juan Mata corner and powered a header past Neuer for the equaliser. Chelsea won a free kick just outside the area in the 93rd minute, but Drogba smashed it over. The game went to extra time. The first good chance of extra time was when Olić inside the box passed to Gómez but his shot was wide. Later, Drogba fouled Ribery in the box, injuring him and earning Bayern a penalty. Robben's shot was weak and kept out by Čech. In the second half of extra time, Olic attempted to set up van Buyten instead of taking a shot and the ball rolled wide of Čech's far post. 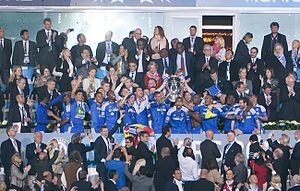 A penalty shoot-out decided the game. Lahm went first and put the ball to Čech's left. Čech got his fingertips to the ball but was unable to keep it out. Mata took Chelsea's first penalty and his weak shot was saved by Neuer. Next was Gómez, who drilled his shot into the bottom right corner. David Luiz took Chelsea's second penalty and buried it in the top corner. Goalkeeper Neuer took Bayern's third penalty. Čech guessed correctly but Neuer's low shot crept past him into the bottom left corner. Lampard was next and he smashed it up the middle. Olić was next, but Čech saved to his left. Ashley Cole put his kick into the far right corner just out of Neuer's reach, leveling the scores at 3-3 and hastening sudden death. Schweinsteiger took Bayern's next penalty, but his effort was tipped onto the post by Cech, leaving Chelsea one kick away from winning the trophy. Didier Drogba sent Neuer the wrong way and put his kick into the bottom left corner to win it for Chelsea. It proved to be his final kick as a Chelsea player until his return in 2014.