The 2013 Malaysian Grand Prix (formally known as the 2013 Formula 1 Petronas Malaysia Grand Prix)[1] was a Formula One motor race that was held on 24 March 2013 at the Sepang International Circuit in Selangor, Malaysia.[2] The race was the second round of the 2013 season, and marked the fifteenth running of the Malaysian Grand Prix as a round of the Formula One World Championship. Sebastian Vettel won the race for Red Bull Racing, having started from pole position.[3]

The race was marked by controversy surrounding team orders issued by the Red Bull and Mercedes teams, with Vettel passing his team-mate Mark Webber to win against an order from his team to hold position,[4] and Lewis Hamilton retaining third place in front of Mercedes team-mate Nico Rosberg on orders from team principal Ross Brawn.[5][6][7]

As for the 2012 Malaysian Grand Prix, tyre supplier Pirelli brought its two hardest compounds, with the orange-banded hard compound tyre being the harder "prime" tyre, and the white-banded medium compound tyre as the softer "option" tyre.[8] This was the first time the hard compound tyre was used during the 2013 season.

Red Bull's Sebastian Vettel took pole position with a time of 1:49.674. Ferrari's Felipe Massa and Fernando Alonso rounded out the three fastest drivers in the session. Lotus' Kimi Räikkönen qualified 7th but was given a penalty for blocking Mercedes' Nico Rosberg and was demoted to 10th.

The race began with a damp track and tricky conditions, especially around Turn 3. Vettel led from the start with Alonso clipping his front wing on the back of the Red Bull. Alonso managed to stay ahead of Red Bull's Webber, but early on lap 2 the front wing broke off and sent Alonso into the gravel at Turn 1. Vettel made an early stop for slick tyres and fell back several positions in the still wet conditions, though he quickly regained them when he reached drier parts of the track. Webber subsequently took over the lead of the race and kept the lead through the next series of pit stops.

Both Force India drives were forced to retire after captive wheelnut failures. Paul di Resta had a very long stop and Adrian Sutil's next stop was also plagued with the same issue. The team believes the high temperatures might have caused the issue.[10]

Jenson Button briefly led the race on laps 33 and 34 after Webber, Vettel, Hamilton and Rosberg pitted, and looked well positioned to pick up some useful points for the under-performing McLaren team. However, a disastrous pit stop in which a wheel was incorrectly fitted cost him a whole lap.

On lap 44, Webber made his last pit stop and emerged in the lead just ahead of Vettel. The two battled over the next two laps, including a very close call on the front straight, after which Vettel took the lead from this teammate. On the same lap, TV cameras caught Webber flipping the finger to Vettel. Red Bull team principal Christian Horner earlier came on the radio to say, "This is silly Seb(astian). Come on."[4] Behind the race leaders it was the Mercedes pair of Lewis Hamilton and Nico Rosberg battling for third. Rosberg was the faster of the two at this point,[citation needed] and he repeatedly asked the team to be allowed to pass Hamilton, but team principal Ross Brawn replied, "Negative, Nico, negative." He later explained that Hamilton could also go faster, but was under orders to ease off. When Rosberg stayed close to Hamilton, Brawn ordered him to drop back, saying that there was nothing to gain and the priority was to bring both cars home.[11] Maldonado later retired after he was forced to stop the car for precautionary reasons due to a KERS problem,[12] and although Button and Ricciardo also retired late in the race, they were both classified as finishers. 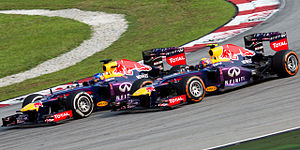 Vettel went on to finish first and win the race followed by Webber, Hamilton, Rosberg, Massa, Grosjean, Räikkönen, Hülkenberg, Pérez, and Vergne. Following the race Webber and Vettel had a brief exchange before the podium ceremony. Webber commented, "Multi-21, Seb. Multi-21," which is in reference to the team order issued, which specifies that car no. 2 (Webber) is to finish the race in front of car no.1 (Vettel) .[13]

During the post-race podium questions Webber said that "I want to race as well but in the end the team made the decision ... we look after the tyres, get the car to the end. In the end Seb made his own decisions today, not respected team orders, but will have protection as usual and that's the way it goes."[14] Horner later acknowledged Vettel had ignored team orders as well as Webber's own history of following similar orders.

When Hamilton was asked about his podium finish, he admitted that Rosberg had deserved it more, adding, "If I'm honest I really feel that Nico should be standing here."[5]