This Vuelta started in Galicia on August 24, 2013. The race spent 5 days in Galicia, then continued anticlockwise touring Spain through Castile and León, Extremadura, Andalusia, Aragon, Catalonia, La Rioja, Cantabria, and Asturias, before returning to Madrid for the finish on September 15.[1][2] The Vuelta included excursions into two neighboring countries, Andorra and France. The top three stage winners received the following bonuses in the general classification: 10 seconds for winners of the stages, six seconds for runners-up, and four seconds for those in third place.[3]

Chris Horner won the 2013 Vuelta at the age of 41 on the 15 September 2013 becoming the oldest ever Grand Tour winner.[4][5][6] Horner beat his nearest challenger, Italian Vincenzo Nibali by finishing ahead of him in each of the final three mountainous stages before the final stage into Madrid.[7][8][9] 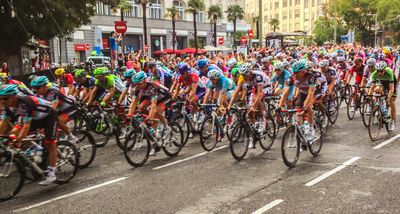 The 21st and final stage of the Vuelta a España 2013 on Paseo del Prado in Madrid.
Main article: List of teams and cyclists in the 2013 Vuelta a España

For the team classification, the times of the best three cyclists per team on each stage were added; the leading team is the team with the lowest total time. For the combativity award, a jury gives points after each stage to the cyclists they considered most combative. The cyclist with the most votes in all stages leads the classification. For the daily combative winner, the rider in question donned a dossard with a red background, on the following stage.