The 2014–15 season was U.S. Città di Palermo's first season back in Serie A after having been relegated at the end of the 2012–13 season. The club competed in Serie A, finishing 11th, and in the Coppa Italia, where Palermo were eliminated early in the third round at the hands of Modena. 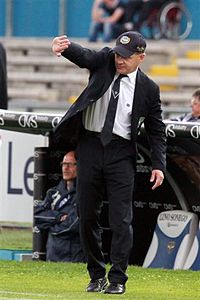 Giuseppe Iachini was confirmed as Palermo head coach after leading the Sicilians to a Serie B title the previous season.

After completing the 2013–14 Serie B season in first place, Giuseppe Iachini was confirmed as head coach. On the other hand, Giorgio Perinetti left the club after chairman Maurizio Zamparini hired Franco Ceravolo as new director of football. Igor Budan will also leave his role as team manager to fulfil a career as director of football himself. This was also followed by Abel Hernández's selection to the Uruguay squad for the 2014 FIFA World Cup, making him the only Palermo player to appear in the competition. Hernández himself was subsequently sold to Hull in what appeared one of the main transfer moves of the season, together with the sale of Kyle Lafferty to Norwich and the signing of two players scouted from the 2014 FIFA World Cup, Sol Bamba and Giancarlo González.

On its first official game, Palermo lost 0–3 at home to Serie B club Modena in the 2014–15 Coppa Italia third round, thus being immediately eliminated from the competition. A number of dismal results left the Rosanero winless at the bottom of the league after six games in the season increased pressure on Iachini, whose coaching staff was successively extended in early October with the hiring of Fabio Viviani.[2] This was followed by the dismissal of Franco Ceravolo and his replacement with youth system head Dario Baccin.

Updated to match(es) played on 31 May 2015. Source: Serie A
Rules for classification: 1) points; 2) head-to-head points; 3) head-to-head goal difference; 4) goal difference; 5) number of goals scored; 6) draw. (Head-to-head record is applied for clubs with the same amount of points only once all matches between said clubs have been played.)

This includes all competitive matches. The list is sorted by shirt number when total goals are equal.