The 2014 Monaco Grand Prix, formally known as the Grand Prix de Monaco 2014, was a Formula One motor race that was held on 25 May 2014 at the Circuit de Monaco, a street circuit that runs through the principality of Monaco. Mercedes driver Nico Rosberg won the race ahead of his team-mate Lewis Hamilton.

The tension was high between the two Mercedes team mates going into the weekend when Hamilton was found to have altered his car settings during the latter stages of the Spanish Grand Prix, using a higher-powered engine setting than the team had previously allowed in order to stay ahead of teammate Rosberg. Rosberg was then discovered to have done the same while chasing down Hamilton at the end of the Bahrain Grand Prix, though he failed to get past. 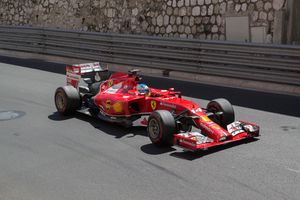 After the first runs in Q3, Rosberg had provisional pole position by 0.059 seconds from Hamilton.[3] During his second and final quick lap, the German ran deep at Turn 5 (Mirabeau) and had to abort his lap, before then reversing back onto the race track. The yellow flags that were brought out as a result of the incident forced Hamilton to slow, ruining his final qualifying lap (after he had set a personal best first sector), which stopped him from challenging Rosberg's earlier time. Red Bull Racing's Daniel Ricciardo was the best of the other drivers, qualifying third.

After the qualifying session had concluded, Nico Rosberg was investigated by the stewards under suspicion of deliberately spoiling Hamilton's lap.[4] The stewards examined video evidence as well as telemetry data from the team and the FIA, eventually concluding that there was no evidence of any wrongdoing by Rosberg.[5] Elsewhere, Daniil Kvyat received a reprimand for impeding Pastor Maldonado during the first part of qualifying, while Marcus Ericsson was given two penalty points on his licence as well as a pit lane start for causing a collision with Felipe Massa.[6] 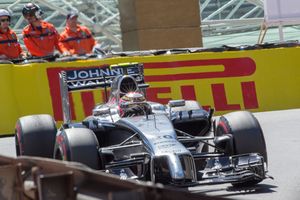 Pastor Maldonado stalled on the grid before the warm-up lap, and failed to start the race. At the start, Nico Rosberg led from Lewis Hamilton and Sebastian Vettel while Kimi Räikkönen advanced from sixth to fourth, ahead of Daniel Ricciardo and Ferrari team-mate Fernando Alonso who had been boxed in behind Ricciardo. On lap one, Sergio Pérez ran wide at Mirabeau and was hit by Jenson Button when he rejoined the racing line. Pérez spun and had to retire after colliding with – and damaging the cars of – Adrian Sutil and Romain Grosjean. This brought out the safety car. During this period Vettel suffered a problem with his turbo and had to retire following the restart.

Adrian Sutil started moving up from the back of the field following his early pit-stop, overtaking Grosjean and Marcus Ericsson at the hairpin, but on lap 23 he lost control coming out of the tunnel and crashed at the Nouvelle chicane - bringing out the safety car for the second time. Everyone pitted under the safety car except Felipe Massa. Kimi Räikkönen had to pit a second time after he was hit at Mirabeau by Max Chilton, who had been unlapping himself, and sustained a puncture, which resulted in him dropping to the back of the field. Jean-Éric Vergne was given a drive-through penalty for an unsafe release into the path of the McLaren of Kevin Magnussen. Rosberg and Hamilton once again pulled away with Ricciardo third and Alonso fourth. Massa made his only pit stop after 40 laps.

Vergne suffered an engine failure on lap 50 and retired for the fourth time in six races in 2014, matching Sutil's record. Valtteri Bottas was caught by Esteban Gutiérrez, Räikkönen and Massa – who was on fresh tyres – before Bottas' engine failed on lap 55. Gutiérrez hit the guardrail at La Rascasse on lap 59, damaging the rear suspension of his Sauber and causing him to retire while running in eighth and on course for his first points of the season. This promoted Jules Bianchi into tenth, which put him in position to score Marussia's first and only points in Formula One, but he also earned a five-second time penalty for illegally taking an earlier, five-second time penalty under the safety car. The penalty was applied to Bianchi's total race time post-race as he did not pit again in the remaining laps.

Jenson Button passed his teammate Magnussen at turn one, moving up to sixth; Räikkönen then attempted to do the same at the hairpin but ran too deep, leaving both himself and Magnussen in the barrier. Both Räikkönen and Magnussen managed to reverse out of the barrier but lost a lot of time, thus promoting Bianchi to eighth and Grosjean to ninth. Räikkönen had to pit a third time for a new front wing.

Meanwhile, at the front, Hamilton had been about a second behind Rosberg for most of the race with Ricciardo almost 15 seconds behind; however Hamilton got some dirt in his eye with 12 laps to go and slowed down as a result,[7] allowing Ricciardo to catch up. By lap 73, Ricciardo was right behind Hamilton, but having cleared his eye, Hamilton was able to hold on to his position and claimed second at the finish, while Ricciardo finished third. Rosberg won his second consecutive Monaco Grand Prix and took back the championship lead. Outside the podium finishers, Alonso in fourth was the only other car to finish on the lead lap. Nico Hülkenberg ended the race fifth, holding off a late charge by Button who was on fresher tyres. Massa finished seventh, ahead of Grosjean and Bianchi who swapped places in the final classification after Bianchi's post-race penalty was applied. Bianchi and the Marussia team both received their first and only points in Formula One for finishing ninth, while Magnussen recovered to finish tenth. Ericsson came from the pit lane to finish in a career-best 11th, just missing out on his and Caterham's first points.

^3  — Jules Bianchi finished 8th, but 5 seconds was added to his race time for serving a penalty under the safety car, and he dropped one finish position to 9th.[10]