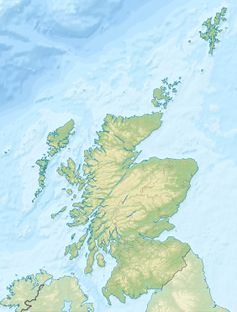 Gleneagles
Location of the Gleneagles Hotel
in Scotland

The 40th Ryder Cup matches were held 26–28 September 2014 in Scotland on the PGA Centenary Course at the Gleneagles Hotel near Auchterarder in Perthshire. This was the second Ryder Cup held in Scotland; it was previously at Muirfield in 1973. The team captains in 2014 were Paul McGinley for Europe and Tom Watson for the USA.

Europe were the defending cup holders, having won in 2012 at Medinah Country Club near Chicago.

Europe won the 2014 competition to retain the Ryder Cup, defeating the USA by 16½ points to 11½, for their third consecutive win.

The Ryder Cup is a match play event, with each match worth one point. The competition format was as follows: 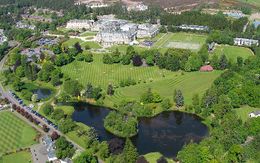 Gleneagles Hotel and grounds in 2004

The Gleneagles Hotel, located one hour outside of Edinburgh and set in grounds of 850 acres (340 ha; 1.33 sq mi), had undergone a major redevelopment programme, partly in preparation for the 2014 Ryder Cup.

The PGA Centenary Course, designed by Jack Nicklaus and one of three at Gleneagles, currently measures 7,262 yards (6,640 m) off the championship tees.[1] The course was awarded the Ryder Cup in 2001, and it was originally scheduled to host the matches in 2013, however this was delayed a year due to the alteration of the Ryder Cup schedule after the September 11 attacks in 2001. This was the final Ryder Cup to be affected by the rescheduling, as it was the furthest scheduled match at the time of the attacks. Just as the 2012 matches had been, all future matches are regularly scheduled for even-numbered years.

In the United Kingdom and Ireland, Sky Sports provided live coverage, with the BBC showing highlights each evening on free-to-air television.

Coverage in South Africa was provided on the Supersport channels.

In the US, corporate siblings Golf Channel and NBC televised the event live, after NBC had traded for complete rights (that it was contractually given the rights to in 2005) back from ESPN, who had televised the previous three Ryder Cups on Friday. Golf Channel televised action on Friday and a half-hour on Saturday, from where NBC took over for the rest of the weekend. In the early-morning sessions, Terry Gannon hosted from the 18th tower alongside Frank Nobilo. Curt Byrum and Tom Abbott served as hole announcers and Jerry Foltz was an on-course commentator. Nick Faldo appeared as a guest commentator on Friday, and sparked controversy after critical comments about Sergio García. For the afternoon sessions and the singles matches on Sunday, the regular NBC golf crew provided coverage. Dan Hicks and Johnny Miller hosted from the 18th tower, with Gary Koch and Peter Jacobsen as hole announcers. On course commentators were Mark Rolfing, Roger Maltbie and Notah Begay III. On the weekend, Colin Montgomerie appeared as a guest commentator to lend a European perspective, a role he previously filled for NBC in 2012.

The European team qualification rules were announced on 21 May 2013. The number of captain's picks was increased from 2 to 3 with the number of players qualifying from the European Points being reduced from 5 to 4. The team consists of:[2][3][4]

The leading players in the Ryder Cup European points were:

The leading players in the Ryder Cup World points were:

Players in qualifying places are shown in green. Captain's picks are shown in yellow. The leading four players (García, Rose, Kaymer and Bjørn) had qualified before the final event (the Italian Open). Stephen Gallacher was then 11.21 points behind Graeme McDowell. The winner of the Italian Open would score 24 points with second place scoring 14.4 and third 9.6. Gallacher therefore needed to either win the Italian Open, finish second alone or finish second jointly with just one other player (scoring 12 points) to overtake McDowell and move into the final automatic qualification spot. In the final round he scored 65 but David Howell (playing in the group before) had scored 63 to take second place by a single shot, pushing Gallacher down to third place.

The United States qualification rules were announced on 20 March 2013. They remained the same as for 2012 except that the number of captain's picks was reduced from four to three. The team consists of:[8]

Players in the qualifying places are shown in green, and captain's picks are shown in yellow. In late July Dustin Johnson announced that he was taking a leave of absence from golf and would miss the Ryder Cup. The qualifying places were therefore extended to the player finishing in 10th place in the points list. Mickelson's second place finish in the 2014 PGA Championship lifted him from 11th to 5th place in the standings. Zach Johnson made the cut in the PGA Championship and this was sufficient to lift him above Jason Dufner and give him the last automatic place despite a last round of 77 which left him in a tie for 70th place and 35.8 points. Dufner withdrew from the event because of a neck injury.

In mid-August Tiger Woods announced that he would not be able to play in the 2014 Ryder Cup because of back problems and would therefore not be one of Watson's three captain's picks.[10] Woods had finished 71st in the Ryder Cup points list.

Tom Watson was named the USA team captain on 13 December 2012. At 65 he became the oldest Ryder Cup captain; a record previously held by J.H. Taylor who was 62 when he captained the Great Britain team in 1933. Previously the oldest United States captain had been Sam Snead who was 57 when he was captain in 1969.[11]

Each captain selected a number of vice-captains to assist him during the tournament.

Captains picks are shown in yellow; the world rankings and records are at the start of the 2014 Ryder Cup.

The players with the highest world rankings not on the team were: Luke Donald (ranked 32), Joost Luiten (36), and Miguel Ángel Jiménez (37).[20]

Captains picks are shown in yellow; the world rankings and records are at the start of the 2014 Ryder Cup.

The players with the highest world rankings not on the team were: Billy Horschel (ranked 14), Chris Kirk (22), and Steve Stricker (28).[20] Their respective rankings on 2 September were 45, 25, and 24,[21] but did not include the results of the Deutsche Bank Championship. It concluded on Monday, 1 September, and was won by Kirk, with Horschel in a tie for second. The rankings for 7 September were 23, 24, and 25, respectively.[22] Horschel had missed the cut by three strokes the previous week at The Barclays, but won the next two events, the BMW Championship and The Tour Championship, to secure the FedEx Cup.

Mickelson extended his own U.S. team record with his 10th appearance. Nick Faldo holds the European record with 11.[23]

The United States won two matches and halved another to take the lead in the Ryder Cup. Jordan Spieth and Patrick Reed, the youngest American pairing in the history of the competition, defeated Ian Poulter and Stephen Gallacher 5 & 4. This was Poulter's first loss in his last eight Ryder Cup matches.[24][25][26]

Europe won three matches and halved the fourth to take a 5–3 lead in the Ryder Cup. It was the first time since 2006 that Europe led after the first day of the competition.[24] Justin Rose and Henrik Stenson, who won 5 & 4 in their morning match, played again and won; they never trailed at any point during the day. Gene Wojciechowski, a columnist for ESPN, criticized American captain Tom Watson for not playing Jordan Spieth and Patrick Reed in the afternoon after they had won their morning match 5 & 4.[27]

The European pairing of Justin Rose and Henrik Stenson led off and won their third straight match in two days. Their score of 12-under set a Ryder Cup record in fourballs.[28]

For the second straight day, Europe earned 3½ points in the afternoon foursomes, increasing their lead to 4 going into the singles matches.[28]

Because of a late finish by Rory McIlroy in the morning session Match 2 (Furyk/Mahan v. García/McIlroy) started after Match 3 (Spieth/Reed v. Kaymer/Rose). The table below reflects the official order.[29]

Europe won the Ryder Cup for third consecutive time.[30] Welshman Jamie Donaldson played the winning shot when his second to the 15th hole landed less than 2 feet from the hole and Keegan Bradley conceded the hole.[31] Donaldson had halved the 14th hole with Bradley to find himself in a Dormie position, where a minimum half-point is guaranteed.[32] This meant that Europe were guaranteed a minimum 14–14 score (enough to retain the cup) but the scores are not official until the match is actually won, or halved after 18 holes.[33][34]