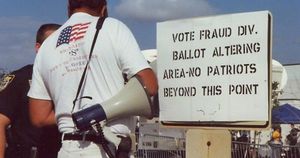 Voter fraud has become a serious problem across the United States and threatens the integrity of the 2020 presidential election.

When Democrats want to tilt elections in their favor outside the ballot box - Marc Elias of Perkins Coie is the go-to guy. Perkins Coie is the Democratic law firm - paid by the Hillary Clinton campaign - that hired Fusion GPS to dig up dirt on Donald Trump in 2016. They failed - but still compiled the ‘’Steele dossier’’ full of foreign-solicited lies about Trump and Russia - which was leaked by Obama intelligence officials to try to sabotage the new president’s administration - sow doubt in his election victory - and invalidate the votes of 63 million Americans. From Wisconsin to Nevada - to California - Marc Elias and the Democrats pushed lawsuits disguised as “election reform” to water down important election safeguards and increase the opportunity for fraud - abuse - and corruption. In August 2020 ‘’Politico’’ reported -

File:Ballot harvesting.jpeg
Coronavirus has turned the Democratic Party’s voter contact program - one operative said - into something more like a tech support operation than a traditional door-knocking effort…..Priorities USA - the Democratic super PAC - is spending $24 million on voter mobilization - which includes vote-by-mail education. Fair Fight - a group founded by Stacey Abrams - has rolled out voter protection programs in 17 states….

Meanwhile - President Donald Trump’s recent attacks on the USPS and on mail-voting is raising concern among voters - operatives say.

“We’ve seen such an increase from young people in terms of concern about their ballot casting -” said Jared DeLoof - the states director of NextGen America - which targets younger voters. “They want to vote - they want to make sure that that vote is going to count.” […]

Democrats believe they will also have to follow up with some voters after their ballot has been cast - in an effort to help them fix ballots that have been rejected for technical reasons. State rules vary widely on if or how voters can correct their ballots - and the time windows to do so can be short.

While Democratic campaigns and groups navigate the patchwork of state rules governing mail ballots to encourage turnout - Democratic election attorney Marc Elias is trying to change many of those rules.

This is the other half of the party’s vote-by-mail efforts: a sprawling legal effort that spans every battleground state and is costing tens of millions of dollars. Priorities USA - just one of Elias’ clients - has expanded its voting litigation budget to $32 million.

Elias - who was the lead attorney in former Sen. Al Franken’s (D-Minn.) 2008 recount victory and the general counsel for Hillary Clinton and John Kerry’s presidential campaigns - is pursuing what he calls “four pillars” of legal changes to election laws during coronavirus. The first - that mail ballots should include paid postage with them - has some cross-partisan support.

The other three do not - locking Elias in a wide-range legal fight with Republicans all over the country - including the Republican National Committee and its legal budget of at least $20 million. Those fights are over Elias’ push to mandate that states count ballots postmarked by Election Day but received after the fact; overhauling signature matching laws - which Elias derides as based on pseudoscience; and allowing for third parties to collect and turn in voters’ sealed absentee ballots - which Democrats call “community collection” and Republicans largely deride as “ballot harvesting.”

“One thing you do is you make sure that people whose ballot is being challenged based on signature matching - that the people that are doing that have been trained - are applying uniform non-discriminatory standards. And most importantly - the voter is notified and has an opportunity to cure -” Elias said of his legal strategy. (A cure process mandates that a state contacts voters whose ballots have been rejected to give them the ability to fix — or cure — their ballot.)

Several Democratic-backed lawsuits have also pushed to expand who can cast absentee ballots. In 44 states - any voter can - at a minimum - request an absentee ballot if they choose to do so - and some states have changed that requirement as a response to the pandemic. […]

Republicans argue that allowing for outside parties to collect and deliver ballots could lead to coercion or fraud. […]

The RNC and the Trump campaign pushed back against the Democrats’ assault on the integrity of elections. All across the country - Democrats tried to use coronavirus and the courts to legalize ballot harvesting - implement a nationwide mail-in ballot system - and eliminate nearly every safeguard in our elections.

One in five mail in ballots have been rejected in several 2020 elections. Nearly two-thirds (62%) say there is fraud in U.S. elections - and that fraud would concern them under Democrats’ nationwide mail-in ballot system. Americans overwhelmingly approve of the safeguards Democrats are suing to eliminate like signature matching (84%) - voter identification (80%) - and a ballot receipt deadline of election day (83%). Voters also oppose (67%) allowing campaign workers to collect mail-in ballots - also known as ballot harvesting.[2]

The EO reads in part: