The 20 mm caliber is a specific size of cannon or autocannon ammunition.

There are few weapons (aside from shotguns, large game hunting rifles, and heavy caliber muzzleloading "rampart" or "wall guns" popular in the early mid 19th century European militaries[1]) which have been built that fire projectiles between 12.7mm (such as the 12.7mm NATO) and 20 mm caliber, though there were several 13mm heavy machine guns used during WWII, such as the MG 131; the 14.5 mm caliber is still used by some Soviet machine guns such as the KPV and anti-tank rifles such as PTRS, PTRD, and NTW-20.

Since 20mm is the cutoff point where most nations switch from bullets to shells, it has come to also generally be the cutoff point between weapons classified as a machine gun or a cannon. This can vary, however: for example, in WWII, Japan classified any weapon over 11mm as a cannon; thus, in Japanese records, their 12.7mm Ho-103 aircraft gun is classified as an autocannon, as it used explosive shells to overcome its lower muzzle velocity compared to American 12.7mm/.50BMG weapons). A machine gun does not fire shells, so historically a weapon that fires shells below 20mm can be a cannon. A true definition will always mention whether the weapon fires bullets or shells in addition to its caliber.

A very small number of anti-tank rifles have been produced in 20 mm and larger calibers. 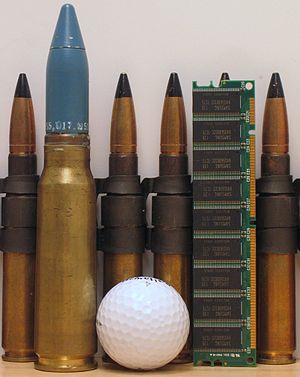 Like most cannon ammunition, 20mm caliber weapons are typically used against large targets such as vehicles, buildings, or aircraft. Though lethal against individual soldiers, 20mm ammunition is so large and heavy that its effects are inefficient against relatively small targets.

Each weapon is listed with its cartridge type appended.

Cartridge type indicates the diameter of projectile and the length of the cartridge that holds it; for example 20×102mm is a 20 mm projectile in a 102 mm long case. Only rarely do two designers use the same case length, so this designation is usually definitive. Some cartridge types have additional letters or information about them listed.