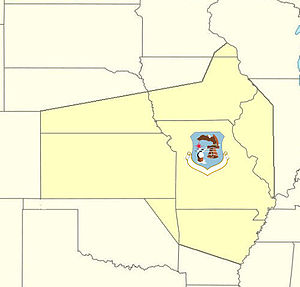 The 20th Air Division is an inactive United States Air Force organization. Its last assignment was with Tactical Air Command at Tyndall Air Force Base, Florida where it was inactivated on 1 March 1983.

During most of the division's history it served with Air Defense Command as a regional command and control headquarters. Between 1955 and 1967 the division controlled air defense units in the central United States. It controlled a slightly different areas of the midwestern US from 1955 to 1960 and again from 1966 to 1967. Its area of responsibility shifted to the east coast if the United States from 1969 to 1983. It was shifted to its final station on paper in 1983 and was immediately inactivated.

The 20th Air Division was assigned to Air Defense Command (ADC) for most of its existence. It served as a regional command and control headquarters, controlling fighter interceptor and radar units over several areas of responsibility during the Cold War. For three years it also commanded a surface-to-air missile squadron.[1]

The division was initially activated as an intermediate command organization under Central Air Defense Force at Grandview Air Force Base (later Richards-Gebaur Air Force Base) in June 1955.[2] The division was responsible for the interceptor and radar units within an area that covered parts of Nebraska, Oklahoma, Arkansas, Illinois, Iowa, and virtually all of Kansas and Missouri.[3]

On 1 October 1959 ADC activated the Sioux City Air Defense Sector and its Semi Automatic Ground Environment (SAGE) DC-22 Direction Center and assigned it to the division.[4] The 20th also operated a Manual Control Center (MCC-2) at Richards-Gebaur. The division was inactivated in 1960 when ADC reorganized its regional air defense units, and the 33d Air Division assumed command of most of its former units.[2][5] 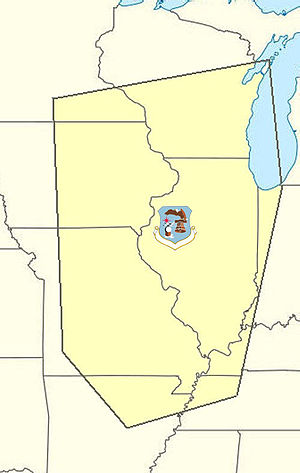 The division was reactivated in 1966 under Tenth Air Force as a SAGE organization, replacing the Chicago Air Defense Sector when ADC discontinued its air defense sectors and replaced them with air divisions.[6] The 20th provided air defense from the Truax Field, Wisconsin DC-7/CC-2 SAGE blockhouse for parts of Wisconsin, Minnesota, Iowa, Missouri, Arkansas, Tennessee, Kentucky, Indiana, and all of Illinois.[3] The division also acted as the 20th NORAD Region after activation of the North American Air Defense Command (NORAD) Combat Operations Center at the Cheyenne Mountain Complex, Colorado. Operational control of the division was transferred to NORAD from ADC.[citation needed]

In addition to the active duty interceptor and radar units, the division supervised Air National Guard units that flew interception sorties using (among other aircraft) McDonnell F-101 Voodoos and Convair F-106 Delta Darts. At the same time the division controlled numerous radar squadrons. It was inactivated in 1967[1] as part of an ADC consolidation of intermediate level command and control organizations, driven by budget reductions required to fund USAF operations in Southeast Asia.[citation needed] 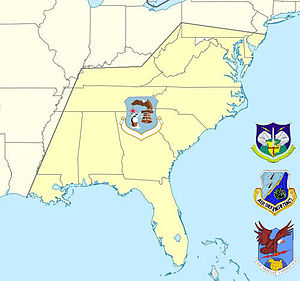 The 20th Air Division was activated for a third time in November 1969 under Aerospace Defense Command (ADCOM).[2] The division provided air defense for virtually all of the southeastern United States, except for most of Louisiana from the SAGE DC-4 blockhouse at Fort Lee Air Force Station, Virginia.[7] The division also controlled a CIM-10 Bomarc surface-to-air anti-aircraft missile squadron near Langley Air Force Base until the squadron's inactivation in October 1972.[8]

The division moved to Tyndall Air Force Base, Florida in March 1983[1] where it was inactivated and its mission, personnel and equipment were transferred to the Southeast Air Defense Sector.[10]