From Infogalactic: the planetary knowledge core
(Redirected from 20th Maine)
Jump to: navigation, search
File:20th Maine Volunteer Reunion.jpg
Reunion of the 20th Maine, Gettysburg, Pennsylvania, 1889
File:20th Maine 1889 Reunion at Gettsburg.jpg
1889 veterans of the 20th Maine Volunteer Infantry. Gettysburg, Pennsylvania. General Joshua L. Chamberlain, the officer who commanded them in battle, seated at center right, bracketed by the Maltese Cross banner and the unit's regimental flag. Left is a monument to the unit erected by its veterans. Black and white photograph

The 20th Maine Volunteer Infantry Regiment was a regiment of the United States Army during the American Civil War, most famous for its defense of Little Round Top at the Battle of Gettysburg, July 1863. The 133rd Engineer Battalion carries on the lineage and traditions of the 20th Maine.

The 20th Maine was organized in the state of Maine and mustered into Federal service on August 29, 1862, with Col. Adelbert Ames as its commander. It was assigned to the Army of the Potomac in the 3rd Brigade, 1st Division, V Corps, where it would remain until mustered out on July 16, 1865. At the time the Twentieth joined the brigade it consisted of the 16th Michigan, the 12th, 17th, and 44th New York, 83rd Pennsylvania Volunteer Infantry regiments, and a Michigan company of sharpshooters.

Prior to their notable actions at Gettysburg, the regiment was held in reserve at Antietam, was among those forced to remain overnight within sight of the Confederate lines at Fredericksburg, forcing the regiment's Lt. Col. Joshua Chamberlain to shield himself with a dead man. The unit was unable to participate in the battle of Chancellorsville due to a quarantine prompted by a tainted smallpox vaccine that had been issued to the unit's soldiers.[1] On May 20, 1863, Colonel Ames was promoted and was succeeded as colonel of the regiment by Joshua Chamberlain,[2] who had been offered and declined leadership of the unit at the time it was formed.[3]

Gettysburg and Little Round Top 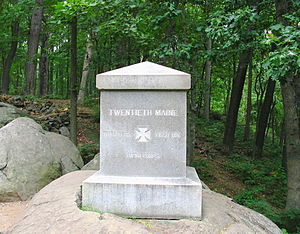 Regimental monument at the center of their lines on Little Round Top.

The most notable battle was the regiment's decisive role on July 2, 1863, in the Battle of Gettysburg, where it was stationed on Little Round Top at the extreme left of the Union line. When the regiment came under heavy attack from the Confederate 15th and 47th Alabama regiments (part of the division led by Maj. Gen. John Bell Hood), the 20th Maine ran low on ammunition after one and a half hours of continuous fighting; it responded to the sight of rebel infantry forming again for yet another push at them by charging downhill with fixed bayonets, surprising and scattering the Confederates, thus ending the attack on the hill. The 20th Maine and the adjacent 83rd Pennsylvania together captured many men from the both Alabama regiments (including Lt. Col. Michael Bulger, commander of the 47th),[4] as well as several other men of the 4th Alabama and 4th and 5th Texas regiments of the same division. Had the 20th Maine retreated from the hill, the entire Union line would have been flanked, and would have most likely lost the battle of Gettysburg, although there is much debate on the subject. Union morale and support for the war was wavering, due to many defeats. If the Union had lost the battle of Gettysburg the Confederate army could have possibly marched on to Washington D.C. and ended the war. The 20th Maine’s action in holding the hill has been credited with helping to turn the tide of the war.[citation needed]

It has been suggested that Lt. Holman S. Melcher[5] initiated the charge, although Col. Chamberlain has been credited by most historians for ordering the desperate attack.[6] This action is depicted in the novels The Killer Angels and Courage on Little Round Top, and was subsequently an important scene in the movie Gettysburg.

The 20th Maine marched from Appomattox, Virginia, on May 2, reaching Washington, D.C., on May 12, where the remaining original members were mustered out of service on June 4, 1865, with the remainder of the regiment leaving the service on July 16.

The 20th Maine had a total wartime enrollment of 1,621 men (including initial muster, replacements, and drafts), losing 147 dead from combat, 146 dead from disease, 381 wounded, and 15 in Confederate prisons.