The 25th Air Division is an inactive United States Air Force intermediate echelon command and control organization. It was last assigned to First Air Force, Tactical Air Command (ADTAC). It was inactivated on 30 September 1990 at McChord Air Force Base, Washington.

The command was activated on 25 October 1948[1] being the first Air Division for air defense. Its headquarters was at Silver Lake Air Warning Station, near Everett, Washington[1] under Continental Air Forces. The 25th AD did not assume any command responsibilities until 1949 when it became an intermediate level command under the Air Defense Command, Western Air Defense Force. Its initial Area of Responsibility (AOR) was a large area of the northwest Continental United States, from the 103rd meridian west and north of the 42nd parallel north. This encompassed an area consisting of the states of Washington, Oregon, Idaho, Montana and Wyoming and the western parts of North and South Dakota as well as Nebraska.

During the 1950s the AOR of the 25th AD changed frequently, but its core area always included the area of Washington State west of the Cascade Mountains. On 1 January 1951, Air Defense Command regained major command status, and the 25th AD was one of four Air Divisions assigned to the new command. Later that year, on 15 September HQ 25th AD was moved from Silver Lake to McChord Air Force Base, near Tacoma, Washington.[1] 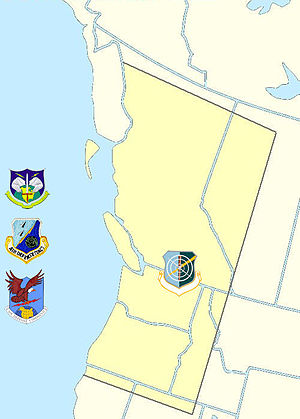 During the Cold War era, the 25th AD equipped, administered, trained and provided air defense combat ready forces within the northwestern United States. It exercised command jurisdiction over assigned units, installations, and facilities and provided and maintained facilities for the Air Division control center. In addition, the division and its subordinate units also participated in numerous tactical air defense training exercises.[1] In the late 1950s, the Division also controlled United States-built radar stations in Western Canada as part of the Pinetree Line. These stations were turned over to the Royal Canadian Air Force in the early 1960s.

In May 1960, SAGE Combat Center Number 3 (CC-03) became operational at McChord, bringing these separate Direction Centers under a unified center under the 25th AD. In July, DC-16 at Stead was reassigned to the 28th Air Division at Hamilton Air Force Base, California and the inactivation of the Western Air Defense Force brought the 25th AD directly under the control of Air Defense Command.[1] In 1966 it was assigned to Headquarters, Fourth Air Force at Hamilton,[1] although it remained stationed at McChord. It also replaced the Seattle Air Defense Sector in 1966. Assumed additional designations of 25th NORAD Region and 25th CONAD Region after activation of the NORAD Combat Operations Center at the Cheyenne Mountain Complex, Colorado and reporting was transferred to NORAD from ADC at Ent Air Force Base in April 1966. Assumed additional designation 25th ADCOM Region on 8 December 1978. 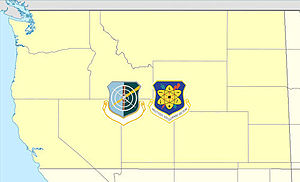 The division was a major part of Air Defense Command, and later Aerospace Defense Command (ADCOM) in 1968. In 1979 it was incorporated into Tactical Air Command with the inactivation of ADCOM as a major command. Under Air Defense Tactical Air Command.[1] In 1985 most active-duty units of ADCOM were inactivated or reassigned to other missions, and the air defense mission came under Air Force Reserve and Air National Guard units under First Air Force.

It continued its mission until 1990, when the 25 AD was inactivated,[1] its mission and components becoming part of the First Air Force Northwest Air Defense Sector.