The 29th Air Division (29th AD) is an inactive United States Air Force organization. Its last assignment was with Air Defense Command, being stationed at Duluth International Airport, Minnesota. It was inactivated on 15 November 1969. 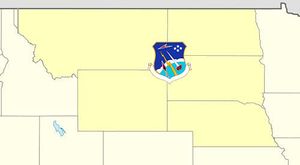 Assigned to Air Defense Command (ADC) for most of its existence, the division's mission was the air defense of Montana, Idaho, Wyoming, and parts of Nevada, Utah, and Colorado. By 1953, the area changed to include North Dakota, South Dakota, and Nebraska. The 29th supervised the training of its units, and participated in numerous training exercises.[2]

The division moved from Richards-Gebaur Air Force Base, Missouri, to Duluth International Airport, Minnesota, on 1 April 1966 as part of an ADC reorganization, the division's area changed to include Minnesota, parts of Wisconsin, and North Dakota, and later expanded to cover most of Iowa.[2] Assumed additional designation of 29th NORAD Region after activation of the NORAD Combat Operations Center at the Cheyenne Mountain Complex, Colorado and reporting was transferred to NORAD from ADC at Ent Air Force Base in April 1966 as the : Organized as 29th NORAD Region/Air Division on 1 April 1966, replacing the Duluth Air Defense Sector.

Inactivated in November 1969 as ADC phased down its interceptor mission as the chances of a Soviet bomber attack on the United States seemed remote, its mission being consolidated into North American Aerospace Defense Command (NORAD)'s, 23d and 24th NORAD Regions/Air Divisions.