Second Epistle to the Corinthians

From Infogalactic: the planetary knowledge core
(Redirected from 2 Corinthians)
Jump to: navigation, search

The Second Epistle to the Corinthians, often referred to as Second Corinthians (and written as 2 Corinthians), is the eighth book of the New Testament of the Bible. Paul the Apostle and "Timothy our brother" wrote this epistle to "the church of God which is at Corinth, with all the saints which are in all Achaia".[2Cor.1:1]

While there is little doubt among scholars that Paul is the author, there is discussion over whether the Epistle was originally one letter or composed from two or more of Paul's letters.

Although the New Testament only contains two letters to the Corinthians, the evidence from the letters themselves is that he wrote at least four:

The abrupt change of tone from being previously harmonious to bitterly reproachful in 2 Corinthians 10–13 has led many to speculate that chapters 10–13 form part of the "letter of tears" which were in some way tagged on to Paul's main letter.[1] Those who disagree with this assessment usually say that the "letter of tears" is no longer extant.[2] 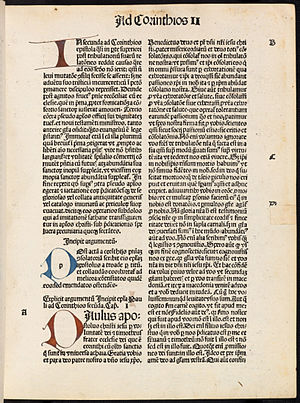 The book is usually divided as follows:[2]

Paul's contacts with the Corinthian church can be reconstructed as follows:[2]

In Paul's second letter to the Corinthians, he again refers to himself as an apostle of Christ Jesus by the will of God and reassures the people of Corinth will not have another painful visit but what he has to say is not to cause pain but to reassure them of the love he has for them. It was shorter in length in comparison to the first and a little confusing if the reader is unaware of the social, religious, and economic situation of the community. Paul felt the situation in Corinth was still complicated and felt attacked. Some challenged his authority as an apostle and compares the level of difficulty to other cities he has visited who had embraced it, like the Galatians. He is criticized for the way he speaks and writes and finds it just to defend himself with some of his important teachings. He states the importance of forgiving others, and God’s new agreement that comes from the Spirit of the living God (2 Cor. 3:3), and the importance of being a person of Christ and giving generously to God’s people in Jerusalem, and ends with his own experience of how God changed his life (Sandmel, 1979).

This epistle, it has been well said, shows the individuality of the apostle more than any other. "Human weakness, spiritual strength, the deepest tenderness of affection, wounded feeling, sternness, irony, rebuke, impassioned self-vindication, humility, a just self-respect, zeal for the welfare of the weak and suffering, as well as for the progress of the church of Christ and for the spiritual advancement of its members, are all displayed in turn in the course of his appeal." —Lias, Second Corinthians.[5]

Online translations of Second Epistle to the Corinthians: