The 320th Air Expeditionary Wing (320 AEW) is a provisional United States Air Force unit assigned to the Air Force District of Washington. It is stationed at Bolling AFB, District of Columbia. The 320 AEW may be activated or inactivated at any time.

The 320 AEW was activated at Bolling in December 2006 for former President Gerald Ford’s state funeral during the Christmas and New Year holidays, attaching 634 personnel to complete a 10-day mission in three joint-operation areas. In less than 12 hours from notification, the 320 AEW deployed 167 joint forces and equipment for JTF Ceremony Forward.

It was activated in December 2008 to support Air Force requirements during the 2009 Presidential Inauguration, working with the Armed Forces Inaugural Committee, or AFIC.

The wing was originally activated during World War II and served with Twelfth Air Force as the 320th Bombardment Group. The highly decorated unit was equipped with the Martin B-26 Marauder aircraft. The group was later merged with the 320th Bombardment Wing, a component organization of Strategic Air Command's deterrent force during the Cold War, as a strategic bombardment wing. 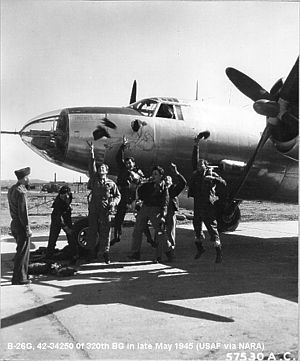 Constituted as 320th Bombardment Group (Medium) on 19 June 1942 and activated on 23 June at MacDill Field (now MacDill Air Force Base), Florida. The operational squadrons of the group were the 441st, 442d, 443d and 444th Bomb Squadrons. The 320th was equipped with the Martin B-26 Marauder aircraft.

The group was subsequently relocated to nearby Drane Field (now Lakeland Linder Regional Airport), Florida. Most of the group moved to North Africa via England, August–December 1942; crews then flew their planes over the South Atlantic route and arrived in North Africa, December 1942 – January 1943.[1]

They began combat with Twelfth Air Force in April 1943 and operated from bases in Algeria, Tunisia, Sardinia, and Corsica until November 1944. During the period April–July 1943, flew missions against enemy shipping in the approaches to Tunisia, attacked installations in Sardinia, participated in the reduction of Pantelleria, and supported the Allied invasion of Sicily. It then bombed marshalling yards, bridges, airdromes, road junctions, viaducts, harbors, fuel dumps, defense positions, and other targets in Italy. The group supported forces at Salerno and knocked out targets to aid the seizure of Naples and the crossing of the Volturno River. Missions were flown to Anzio and Cassino and the group engaged in interdictory operations in central Italy in preparation for the advance toward Rome.[1]

In a disastrous error on 28 January 1944, the group destroyed a train loaded with Allied POWs on a bridge at Orvieto North, Italy. The death toll has been reported at 450.[2][3]

The 320th Bombardment Group received the French Croix de Guerre with Palm for action in preparation for and in support of Allied offensive operations in central Italy, April–June 1944. It was the first such citation to be awarded to an American unit by the provisional French government in World War II.[4] The unit also received a Distinguished Unit Citation (DUC) for a mission on 12 May 1944 when, in the face of an intense antiaircraft barrage, the group bombed enemy troop concentrations near Fondi in support of the U.S. Fifth Army's advance toward Rome. From June to November 1944 operations included interdictory missions in the Po Valley, support for the invasion of Southern France and attacks on enemy communications in northern Italy.[1]

The 320th was then moved to France in November 1944 and bombed bridges, rail lines, gun positions, barracks, supply points, ammunition dumps, and other targets in France and Germany until V-E Day. The group received a second DUC for operations on 15 March 1945 when the group bombed pillboxes, trenches, weapon pits, and roads within the Siegfried Line to enable a breakthrough by the Seventh United States Army.[1]

With the end of hostilities in Europe, the group moved to Germany in June 1945 and participated in the disarmament program. It returned to the United States, November–December 1945, and was inactivated on 4 December 1945.[1] 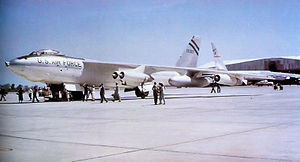 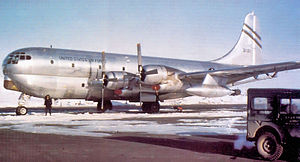 The wing replaced its propeller-driven B-29s with new Boeing B-47E Stratojet swept-wing medium bombers capable of flying at high subsonic speeds and primarily designed for penetrating the airspace of the Soviet Union in 1953. The wing trained the initial B-47 cadre for the 96th Bombardment Wing, from December 1953 to January 1955 and subsequently deployed as a wing to RAF Brize Norton, England from 5 June to 4 September 1954 and Andersen Air Force Base, Guam from 5 October 1956 to 11 January 1957.[5] In the late 1950s, the B-47 Stratojet was considered to be reaching obsolescence, and was being phased out of SAC's strategic arsenal. Aircraft were reassigned to other SAC units as replacements in late 1959 and 1960 becoming non-operational.

Emblem of the 4134th Strategic Wing

With the retirement of the Stratojet, the 320th Bomb Wing was reassigned to Mather Air Force Base, California, an Air Training Command (ATC) base, on 1 February 1963 where it assumed the assets of the 4134th Strategic Wing,[5] a SAC tenant organization at Mather.[6] The 4134th was established by SAC on 1 May 1958 at Mather and assigned to the 14th Air Division[7] as part of SAC's plan to disperse its Boeing B-52 Stratofortress heavy bombers over a larger number of bases, thus making it more difficult for the Soviet Union to knock out the entire fleet with a surprise first strike.[8] The wing was assigned only two maintenance squadrons until 1 July 1958 when the 72d Bombardment Squadron, consisting of 15 B-52Fs. moved to Mather from Travis Air Force Base, California where it had been one of the three squadrons of the 5th Bombardment Wing.[9] Starting in 1960, one third of the squadron's aircraft were maintained on fifteen-minute alert, fully fueled and ready for combat to reduce vulnerability to a Soviet missile strike. This was increased to half the squadron's aircraft in 1962.[10] The 4039th (and later the 416th) continued to maintain an alert commitment until 1965, and periodically thereafter when not supporting operations in Southeast Asia. Additional maintenance squadrons and a squadron to provide security for special weapons were activated at the same time.

On 1 January 1959 the 49th Aviation Depot Squadron was activated to oversee the wing's special weapons. The 4135th became fully organized on 1 July 1959 when the 904th Air Refueling Squadron, flying Boeing KC-135 Stratotankers was activated and assigned to the wing.[6] In 1962, the wing's bombers began to be equipped with the GAM-77 Hound Dog and the GAM-72 Quail air-launched cruise missiles, The 4134th Airborne Missile Maintenance Squadron was activated in November to maintain these missiles

In 1962, in order to retain the lineage of its MAJCOM 4-digit combat units and to perpetuate the lineage of many currently inactive bombardment units with illustrious World War II records, Headquarters SAC received authority from Headquarters USAF to discontinue its Major Command controlled (MAJCON) strategic wings that were equipped with combat aircraft and to activate Air Force controlled (AFCON units), most of which were inactive at the time which could carry a lineage and history.

As a result, the 4134th SW was replaced by the 320th Bombardment Wing, Heavy,[5] which assumed its mission, personnel, and equipment on 1 February 1963.[11] In the same way the 441st Bombardment Squadron, one of the unit's World War II historical bomb squadrons, replaced the 341st BS. The 49th Munitions Maintenance Squadron and the 904th Air Refueling Squadron were reassigned to the 320th. Component support units were replaced by units with numerical designation of the newly established wing. Under the Dual Deputate organization,[12] all flying and maintenance squadrons were directly assigned to the wing, so no operational group element was activated. Each of the new units assumed the personnel, equipment, and mission of its predecessor.

In 1964 and 1965, the wing's B-52Fs were selected for modification under programs South Bay and Sun Bath. These modifications enabled the wing's bombers to double their bomb load from 24 to 48 750 lb bombs by the installation of external bomb racks. With these modifications, the wing's planes, along with those of the 7th Bombardment Wing were the first to deploy to Andersen Air Force Base, Guam and the first to fly Arc Light bombing missions. The modified B-52Fs were the only SAC bombers to deploy for Arc Light missions until 1966, when the B-52Fs were replaced by B-52Ds with the Big Belly modification than enabled them to carry a larger and more varied bomb load.[13]

The entire wing was drastically reduced from February to July 1965, from December 1965 to March 1966, and from June 1972 to October 1973, when all aircraft, crews, and most support personnel were loaned to other SAC units based at Andersen AFB Guam, U-Tapao Royal Thai Navy Airfield, Thailand and Kadena AB, Okinawa for operations in Southeast Asia.[5]

Starting in 1972, the short-lived 3542d Operations Squadron conducted Convair T-29 pilot training for the Fifteenth Air Force, a number of T-29s and C-131s having been distributed throughout SAC as utility aircraft for various SAC wings and bases.[5] This was done in conjunction with the 323d Flying Training Wing of the Air Training Command (ATC) at Mather, which also flew the T-29 in support the Undergraduate Navigator Training (UNT) program.[14][15] The 3542d Operations Squadron was inactivated the following year, in late 1973, concurrent with the retirement of the T-29 from UNT in late 1973 and early 1974 and its replacement with the Boeing 737-200 based T-43 Bobcat.[16]

In the early 1980s, the 320th and the 441 BS were equipped to carry, and trained in the employment of, the US Navy's AGM-84 Harpoon missile and various types of anti-ship mines as part of a joint USN-USAF initiative to employ USAF bomber aircraft in maritime operations.

The 904th Air Refueling Squadron was inactivated 1 October 1986 and its older KC-135As modified to KC-135E standard and redistributed to other SAC units or sent to AMARC at Davis-Monthan Air Force Base, Arizona for storage. Fromm this point forward, the 441 BS would rely on the Air Force Reserve's tenant 940th Air Refueling Group at Mather for local KC-135 support, or KC-135 and KC-10 support from other units in the western United States. As a result of the START I treaty with the Soviet Union and the associated mandated reductions in strategic bombers on both sides, the 441 BS with its B-52Gs was inactivated at Mather AFB on 30 September 1989. It was the first B-52G squadron to inactivate under the gradual drawdown of the B-52G fleet pursuant to START reductions of the entire USAF strategic bomber force. 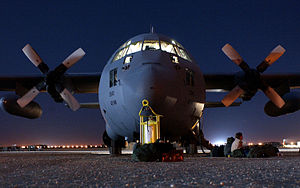 A C-130 Hercules, assigned to the 320th Air Expeditionary Wing at a forward-deployed location during Operation Enduring Freedom.

In 1998, the 320th was reactivated as the 320th Air Expeditionary Group (320 AEG) at Eskan Village, Riyadh, Kingdom of Saudi Arabia. As an element of U.S. Central Command Air Forces (USCENTAF) / 9th Air Force (9 AF), the 320 AEG was a ground-based non-flying organization, with the 320 AEG replacing the earlier 4409th Air Base Group (Provisional) at Eskan that had been in existence since Operations DESERT SHIELD and DESERT STORM in 1990–91.[17]

The primary mission of the 320 AEG at Eskan was to provide liaison with Saudi Arabian Ministry of Defense and Aviation (MODA) for Eskan Village and to provide host base support to the combatant staff of Joint Task Force Southwest Asia (JTF-SWA) and the 9th Air and Space Expeditionary Task Force (9 ASETF), including its associated Coalition Air Operations Center (CAOC), conducting Operation SOUTHERN WATCH, which provided principal senior command and control of all U.S. and Coalition combat flying units enforcing the "No Fly Zone" over Southern Iraq prior to execution of Operation IRAQI FREEDOM in 2003. The 320 AEG also supported United States Military Training Mission (USMTM) Saudi Arabia, the U.S. Office of Program Management – Saudi Arabian National Guard (OPM-SANG), as well as the Royal Air Force and French Air Force headquarters elements also located at Eskan Village.

Redesignated: 320th Air Expeditionary Wing on 1 February 2002 (Remained in provisional status)[21]
Allotted to Air Force District of Washington in 2006 to activate or inactivate at any time.