The 325th Fighter Wing (325 FW) is a wing of the United States Air Force based in Tyndall Air Force Base, Florida.

From 1983 to 2010, training for F-15 pilots was performed at Tyndall by the now inactive 1st, 2d, and 95th Fighter Squadrons. During this period, the 325th FW also hosted training for F-15 Maintenance personnel, and Intelligence Officers assigned to F-15 units. The 1st Fighter Squadron was inactivated in 2006. The 2d and 95th FS's were also inactivated in May and September 2010, respectively. However, with the return to Air Combat Command, the 325th FW will gain a combat-coded F-22 squadron.[3]

The 95th Fighter Squadron was reactivated on 11 October 2013 to begin preparing as a F-22 Raptor combat squadron. 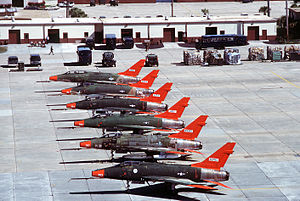 The 325th Fighter Wing was established on 10 May 1948 and activated on 9 June 1948. It conducted air defense of the U.S. west coast, 1948–1952 and 1956–1968. Beginning in spring 1949, the 325th conducted the All Weather Combat Crew Training School. During 1950, the wing also controlled a troop carrier squadron and from May 1950 to June 1951, provided training for elements of a troop carrier wing. On 6 February 1952 the Wing was inactivated and replaced by the 4704th Air Defense Wing, which assumed most of its operational role, while the 567th Air Base Group assumed its host base functions.

An Air Defense Command program to reactivate historic units named "Project Arrow" resulted in the reactivation of the 325th Fighter Group (Air Defense) on 18 August 1955. The 325th group assumed the mission, personnel and equipment of the 567th Air Defense Group. The 325th served as the "host" unit at McChord Air Force Base until October 1956. From February to July 1968, the wing operated an air defense detachment at Osan Air Base, South Korea. The 325th was again inactivated in late 1968. The 325th Fighter Wing was activated on 18 October 1956 and was assigned the 325th group as a subordinate unit controlling its operational squadrons.

On 22 October 1962, before President John F. Kennedy told Americans that missiles were in place in Cuba, the wing dispersed a portion of its force, equipped with nuclear tipped missiles to Paine Air Force Base at the start of the Cuban Missile Crisis.[5] These planes returned to McChord after the crisis.

On 15 March 1963 two Soviet bombers overflew Alaska and Alaskan Air Command F-102s were unable to intercept them.[6] The response to this intrusion was to deploy ten F-106s from the wing to Alaska in what was called Operation White Shoes.[7] However, maintaining these aircraft for an extended period of time put a strain on the wing's combat readiness back at McChord, and eventually a detachment of maintenance personnel was established to maintain the planes in Alaska. The wing got relief from this commitment while it was upgrading its F-106s from the 1st Fighter Wing, which relieved it from March to June 1964. Operation White Shoes terminated in 1965 and the unit's planes returned home.[8]

The wing was reactivated at Tyndall Air Force Base in 1981. It provided Air Defense Weapons Center operational and technical advice on air defense and tactics from, 1981–1983. It also provided test and evaluation new air defense equipment, including use of the PQM-102 and QF-100, former operational aircraft modified to function as manned/unmanned drones. In October 1983, the wing assumed a new mission of conducting qualification training of tactical aircrews. Beginning in 1983 it deployed T-33 and later, F-15 aircraft to USAF, Air National Guard, Marine Corps, and Navy air units to provide electronic countermeasures and dissimilar air combat training and to increase aircrew combat proficiency. The wing performed alert duties from, 1988–1990, intercepting unidentified aircraft and assisting the U.S. Drug Enforcement Administration in anti-smuggling efforts. It became host unit at Tyndall Air Force Base in September 1991.

The 325th has conducted the Air Force's basic course and transition training for the F-22 since 2003. In October 2012, the wing was reassigned from Air Education and Training Command to Air Combat Command, since it had added a combat coded squadron to its training units.[3] This unit, the 95th Fighter Squadron, and other elements of the wing completed their first six month long combat deployment with the Raptor in May 2015.[9]