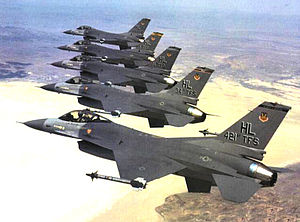 The squadron conducts flying operations and equipment maintenance to maintain combat readiness of an 18-aircraft F-16C LANTIRN squadron. It prepares to deploy worldwide to conduct air-to-air and air-to-ground operations for daylight and nighttime missions.

The group comprises different support facets as squadrons and flights. The Munition Maintenance Squadron has many flights, but is primarily responsible for munitions storage, maintenance and delivery. The Munitions Loading Squadron takes responsibility for attaching the delivered munitions to the various aircraft.[3]

On 23 November 1953, the 388th Fighter-Bomber Wing was activated as part of Tactical Air Command. The wing was reactivated following Secretary of State John Foster Dulles' promise to provide NATO with four additional tactical fighter wings to increase its defenses against the Soviet Union due to the outbreak of the Cold War. The 388th Fighter-Interceptor Wing activated as the 388th Fighter-Bomber Group (later renamed 388th Operations Group) and became the wing's primary combat element. The group's squadrons were equipped with North American F-86F Sabres, and training commenced for operational proficiency.[4]

Once training levels for pilots and aircrews had reached operational levels, the 50th FBW began preparations for its move to France. On 12 December 1954, the 388th FBW arrived at its new home, the newly constructed Étain-Rouvres Air Base.[5] 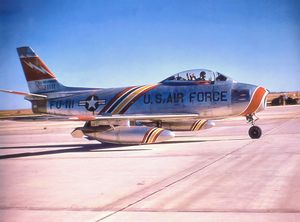 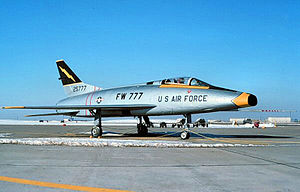 The mission of the 388th FBW was to train for and conduct tactical nuclear weapons delivery. Its secondary mission was to conduct non-atomic tactical air operations. Upon arrival of 388th Wing Headquarters at Etain, the construction delays and other problems seriously hampered the ability of the Wing to use the base for its flying operations. The 562nd FBSquadron was forced to operate from Spangdahlem Air Base, the 563rd from Bitburg Air Base and the 561st from Hahn Air Base in West Germany for the winter of 1954-55.[5]

In April and May 1955, rotational deployments to Wheelus Air Base, Libya began for their first gunnery and bombing training since their arrival in Europe. In the fall, with enough facilities construction completed, the three flying squadrons were transferred from Germany and took up their home assignment at Étain. In August 1955, First Lt. Philip Ortego was assigned to the 561st Fighter Bomber Squadron as its Intelligence Officer.[5]

On 22 November 1955, Det #1, 388th Fighter-Bomber Group was activated at Hahn Air Base to stand nuclear alert with the Wing's F-86's. Personnel and aircraft primarily came from the 561st FBS. In February 1956 the detachment was transferred to more spacious facilities at Spangdahlem Air Base. Rotational deployments of 8 F-86's and support personnel to Germany continued until the fall of 1957 when the 388th was inactivated.[5]

In the fall of 1956 the 388th began planning for conversion to the F-100D/F "Super Sabre" Due to the adverse flying conditions at Etain for conversion training, the new aircraft were deployed to Nouasseur Air Base in Morocco, with the squadrons deploying their F-86's to Nouasseur, then returning to France or Spangdahlem in their new F-100's for Zulu Alert duties.[5]

During this transition period, the 388th experienced a significant personnel crisis, with many of its officers and NCO's completing their two-year unaccompanied tour in France. The personnel problem became worse in the fall of 1957 with many single airmen completing their three years of overseas service and were rotating back to the United States (CONUS).[5]

The manning issues of the 388th, which has fallen to about 65 percent of authorized strength, along with budget shortfalls led HQ USAFE to inactivate the unit instead of transfer it. On 8 December 1957 HQ USAFE inactivated the 388th FBW, with its and assets being redesignated as the 49th Fighter-Bomber Wing, which had been administratively reassigned from Misawa AB, Japan without personnel or equipment.[5]

In October 1962, the 388th Tactical Fighter Wing was reactivated under Tactical Air Command (TAC). The wing was reorganized at McConnell AFB, Kansas, under the Twelfth Air Force, as a tenant unit under the provisional 4347th Combat Training Wing.[4]

Under TAC, the 388th did not have a fighter group, and the four Tactical Fighter Squadrons (560th, 561st, 562d, 563d) were assigned directly to Wing Headquarters. The reactivated wing initially flew the North American F-100C Super Sabre, but was replaced in 1963 by the Republic F-105D/F Thunderchief. On 4 July 1963, it became responsible for the base as the host unit.[4]

The demands of the Vietnam War and escalation of United States involvement in the conflict led TAC to deploy the 388th to Southeast Asia for combat duty. New bases were being established in Thailand, and a permanent organizational structure was needed to accommodate the semi-permanent presence of USAF units at the forward bases. On 8 April 1966, the 388th TFW was relieved of its assignment to Tactical Air Command and was transferred to Pacific Air Forces. The wing was ordered to Korat Royal Thai Air Force Base, Thailand, where its F-105 squadrons had been on temporary rotational deployments for the past two years.[4] 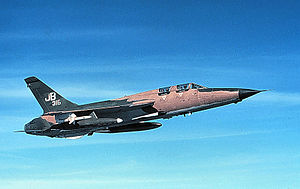 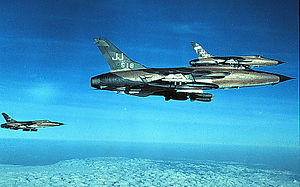 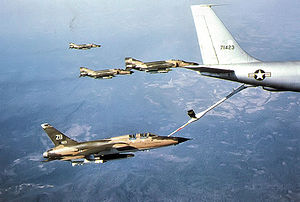 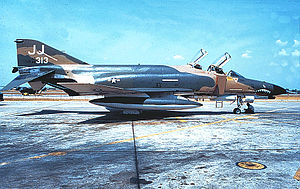 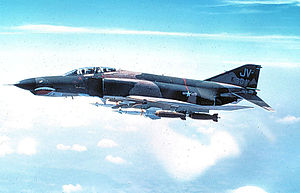 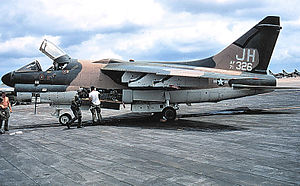 In April 1966 the 388th was sent to Korat Royal Thai Air Force Base, Thailand where it replaced the provisional 6234th Tactical Fighter Wing and assumed host wing responsibilities at Korat. The mission of the wing was to engage in combat operations over Indochina, conducting interdiction, direct air support, armed reconnaissance, and fighter escort missions.[6] During the Vietnam War, numerous units were deployed to and stationed at Korat RTAFB and engaged in combat operations. As part of the rapid buildup of United States forces in Thailand in the mid-1960s, the 388th was the umbrella organization to as many as 34 operating units and about 6,500 USAF airmen. The wing also supported components of the Royal Thai Air Force, and a complement of Royal New Zealand Air Force (RNZAF) Bristol Freighters.

The squadrons assigned to the 388th TFW at Korat were:[1]

In mid-1968 it was decided to make the 388th an F-4 Wing, and also to equip the 388th with the new F-4E and the F-105s would be transferred to the 355th TFW at Takhli RTAFB. The main difference with the F-4E model was the addition of an internal M61 cannon. The F-4C and D models previously in use had shown some serious drawbacks in the initial air-to-air battles over Vietnam. The earlier Sparrow, Falcon, and Sidewinder air-to-air missiles did not perform up to expectations. They were expensive, unreliable, and vulnerable to countermeasures. The Phantoms could carry a podded cannon mounted on the centerline, but it was relatively inaccurate, caused excessive drag which reduced the performance of the Phantom carrying it, and took up a valuable ordnance/fuel station.[6]

On 17 November 1968, an F-4E Phantom squadron from Eglin AFB, FL, replaced the single-seat F-105E Thunderchiefs of the 469th TFS. The new Phantom squadron, the first E-models in Thailand, retained the designation 469th TFS.[6]

In January 1969, the wing sought a new assignment. Proliferating antiaircraft defenses in the Barrel Roll area in the Kingdom of Laos were making operations ever riskier for Slow FACs such as the Raven FACs. Volunteers from the 469th Tactical Fighter Squadron were approved for Fast FAC duty under the call sign "Tiger" in February. On 18 March, the volunteer FACs began flying a single daily sortie. By July, they were so immersed in directing close air support, they were allotted four sorties per day. They supplied the necessary tactical air power for General Vang Pao's Hmong guerrillas to sweep through Operation Raindance.[7] Among the benefits of strike and FAC units being co-located was the Hunter-Killer Team concept fostered by "Tiger" FACs. Strike aircraft could be directed by FACs, or the flight leader could take over the air strike after being led to the target.[8]

On 12 June 1972, the 35th Tactical Fighter Squadron flying F-4D's was deployed from the 3rd TFW, Kusan AB, South Korea, in a "Constant Guard" redeployment to support operations over North Vietnam during Linebacker. They remained until 10 October 1972 when they returned to Korea.[6]

On 2 January 1973, Det 1. 561st Tactical Fighter Squadron deployed from George Air Force Base to Korat flying specially equipped F-105Gs. With the end of combat in August, the squadron returned to the 35th TFW at George on 5 September.[6]

For these operations and its wartime service at Korat Royal Thai Air Force Base (1966–1975), the wing earned a total of eight Air Force Outstanding Unit Awards and a Presidential Unit Citation.[6] 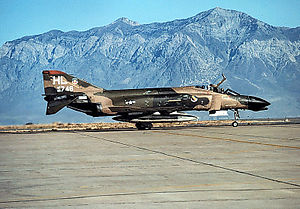 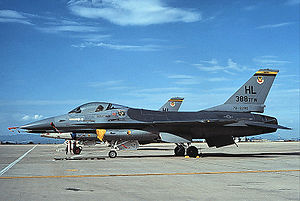 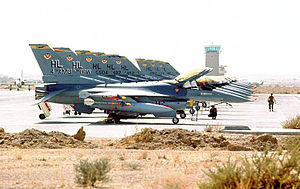 F-16Cs of the 388th TFW line an airfield in Southwest Asia during Operation Desert Storm on 23 January 1991.

The 388th ceased all aircraft operations at Korat Thailand in November 1975 and moved in without personnel or equipment in December 1975 to Hill AFB, Utah, replacing a holding unit-Detachment 1, 67th Combat Support Group. In January 1976, the wing began participation in training missions and numerous exercises in a variety of offensive tactical situations flying F-4D Phantom II tactical fighters.[4]

In March 1981, the wing conducted its first overseas deployment to Fleslan AS, Norway. It won the USAF Worldwide Gunsmoke Fighter Gunnery Meet in 1987. In May 1989, the first F-16C Block 40 aircraft arrived at Hill AFB, Utah. The new model F-16, designed to accommodate the Low Altitude Navigation and Targeting Infrared for Night (LANTIRN) pod, allowed targeting and bombing in adverse operational conditions.[4]

The 388th TFW was the first unit to fly the F-16 into conflict with the Low Altitude Navigation and Targeting Infrared for Night (LANTIRN) system over the skies of Iraq and Kuwait during Operations DESERT SHIELD/DESERT STORM. A number of wing aircraft initially deployed to Spain as attrition reserves from January–December 1991, with two squadrons to Southwest Asia for combat operations from 28 August 1990 – 27 March 1991. After the March 1991 cease-fire, it remained in Southwest Asia to protect Coalition assets and ensure that Iraq complied with treaty terms beginning in December 1991. The 388th FW continued to employ the LANTIRN-equipped aircraft in Operations DESERT CALM, DESERT FOX, and NORTHERN and SOUTHERN WATCH.[4] 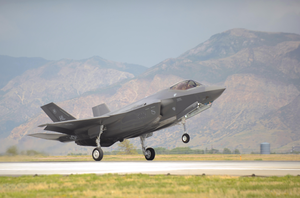 Since September 2001, the 4th, 34th, and 421st Fighter Squadrons and the 729th Air Control Squadron have actively engaged in Operations Enduring Freedom (OEF), Iraqi Freedom (OIF) and Noble Eagle (ONE), defending the nation at home and abroad. The wing continued to develop its role of Forward Air Control-Airborne. Assorted support personnel were deployed en masse or individually from within each unit of the 388 FW.[4]

The 388 FW continued its dominance into the 21st century by avidly and diligently deploying its personnel on a continuous loop of AEF deployments, while taking on new roles with Forward Air Control – Airborne.[4]

On 22 June 2009 a single-seat F-16 from the wing's 421st Fighter Squadron on a training mission crashed in the Utah Test and Training Range. The pilot, Captain George Bryan Houghton, 28, was killed.[9]

On 2 September 2015, the first two Lockheed Martin F-35A Lightning II aircraft arrived at Hill AFB to begin the transition to the aircraft that is scheduled to finish in 2019.[10]