The 3rd Marine Division is an infantry division in the United States Marine Corps based at Camp Courtney, Marine Corps Base Camp Smedley D. Butler and Okinawa, Japan. It is one of three active duty divisions in the Marine Corps and together with the 1st Marine Aircraft Wing (1stMAW) and the 3rd Marine Logistics Group (3rd MLG) forms the III Marine Expeditionary Force (III MEF). The division was first formed during World War II and saw four years of continuous combat in the Vietnam War.

The 3rd Marine Division was officially activated on 16 September 1942 at Camp Elliott, San Diego, California. Most of the original members of the division were drawn from the cadre staff of the 2nd Marine Division.[2] The division was initially built around the 9th Marine Regiment, commanded by Colonel Lemuel C. Shepherd, Jr. who later became the 20th Commandant of the Marine Corps. Major General Charles D. Barrett was the first commanding general of the division.

The division echeloned into Auckland, New Zealand between January and March 1943. In June of that year they moved onto Guadalcanal for additional training. 27 September 1943 saw the division land as part of the Battle of Bougainville and fight on the island until their last unit to arrive, the 21st Marine Regiment, embarked on 9 January 1944. During the course of the battle the division had approximately 400 Marines killed.[3]

They returned to Guadalcanal in January 1944 to rest, refit and train. The next operation the division took part in was the Battle of Guam. From 21 July 1944 until the last day of organized fighting on 10 August, the division fought through the jungles on the island of Guam. During these 21 days of fighting, the division captured over 60 square miles (160 km2) of territory and killed over 5,000 enemy soldiers.[4] The next two months saw continuous mopping up operations in which the Marines continued to engage left over Japanese forces. At the end of the battle the division had sustained 677 Marines killed, 3,626 wounded and 9 missing.[5]

The division remained on the island of Guam for training purposes until they embarked as part of the landing force for the Battle of Iwo Jima. The 3rd Marine Division was initially in reserve for the battle[6] however they were committed one regiment at a time as the initial regiments that landed needed to be relieved. The 21st Marines came ashore on 20 February[6] followed by the 9th Marines and were reinforced by a battalion from the 3rd Marines on 25 February.[7] The Marines of these two infantry regiments, supported by the artillery of the 12th Marine Regiment and tanks of the 3rd Tank Battalion, fought on Iwo Jima until the end of organized resistance on 16 March and the subsequent mopping up operations for the next month. All elements of the Division were back on Guam by 17 April 1945.[8] The fighting on Iwo Jima would cost the 3rd Marine Division 1,131 killed in action and another 4,438 wounded.[9]

After the return to Guam, the Division began preparing for the invasion of Japan. This however never took place as Japan surrendered in August 1945. The division was inactivated on 28 December 1945.[10]

The division was reactivated on 7 January 1952 at Camp Pendleton, California. Immediately after its activation and still in its organizational state, the division began intensive combat training, including new tactics and maneuvers based on lessons learned in the then-ongoing Korean War. During the remaining part of 1952 elements of the division participated in numerous exercises and training problems, including vertical envelopment (helicopter landing), airborne operations and attack, and defense against atomic weapons and missiles.[citation needed] 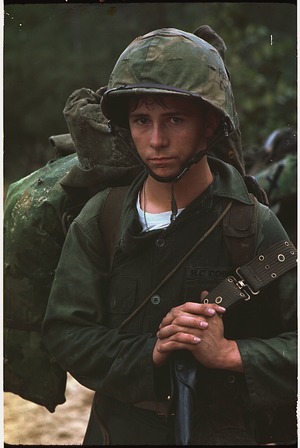 Da Nang, Vietnam. A young Marine private waits on the beach during the Marine landing, August 3, 1965.

On 6 May 1965, the 3rd Marine Division opened the Marine Compound at the Da Nang Air Base, Vietnam. They were the first American combat troops to be sent to Vietnam to protect the Da Nang Air Base.[11] By the end of 1965 the Division had all its regiments (3rd Marines, 4th Marines and 9th Marines) on the ground. In October 1966, then commanding general Lew Walt was ordered to establish strong points just south of the Vietnamese Demilitarized Zone (DMZ). The division moved its headquarters from Da Nang to Phu Bai in late 1966. At the same time the division was also building outposts along the southern half of the DMZ at Con Thien, Gio Linh, Cam Lộ and Đông Hà. During this period, Lima Company of the 3rd Marines was commanded by John Ripley, who became famous for single-handedly destroying the bridge at Dong Ha in 1972, slowing the advance of the North Vietnamese army.[12] The first major multi-regiment operations against the North Vietnamse Army was Operation Hastings in July 1966. Operation Prairie followed in October. This area would come to be known as Leatherneck Square. In late 1967 the headquarters moved again from Phu Bai to Đông Hà in the Quang Tri Province and more outposts were opened. Camp Carroll, Rockpile, Ca Lu and Khe Sanh. The two main enemy divisions the Marines fought were the 324B NVA Division and the 320th NVA Division. On November 14, 1967 the 3rd Marine Division commander General Bruno Hochmuth was killed northwest of Hue City in a helicopter crash. Some of the major operations in 1967 and early 1968 in this area were Operation Prairie III, Operation Prairie IV, Operation Hickory, Operation Cimarron, Operation Buffalo, Operation Kingfisher and Operation Kentucky. Nearly 8,000 NVA were killed during this time period. The Marines suffered over 1400 killed and over 9,000 wounded. There were five Medal of Honors awarded and nearly 40 Navy Crosses given during this period of time. For its service in the Republic of Vietnam the division was awarded the Presidential Unit Citation in 1967.[citation needed]

During the Vietnam War, the 3rd Marine Division suffered 6,869 men killed in action.[14] The division departed South Vietnam in November 1969 with more than 20 Marines receiving the Medal of Honor and moved to Camp Courtney, Okinawa, where it is presently located.[citation needed]

A unit citation or commendation is an award bestowed upon an organization for the action cited. Members of the unit who participated in said actions are allowed to wear on their uniforms the appropriate ribbon of the awarded unit citation. 3d Marine Division has been awarded the following:[citation needed]