The 455th Air Expeditionary Wing (455 AEW) is a provisional United States Air Force USAFCENT unit located to Bagram Airfield, Afghanistan. It is one of two AEWs in Afghanistan. Most of the wing personnel are located at the Air Force Village known as Camp Cunningham.

The wing's primary mission is to support the Global War on Terrorism by providing aerial support for U.S. and Coalition forces on the ground. Activated in 2001, the 455th has members deployed throughout the country supporting Operation Enduring Freedom.

The wing consists of five groups:

The operations group is responsible for all expeditionary flying and aeromedical evacuation operations for the 455th Air Expeditionary Wing. The group oversees the day-to-day operations of one F-15E fighter squadron, one active-duty F-16 squadron, one MC-12 squadron, one National Guard C-130 airlift squadron, and a Navy EA-6B squadron. The EOG also has administrative control over an active-duty EC-130 electronic combat squadron. In addition, the operations group oversees a range of support functions such as airfield management and operations for both Bagram and Kabul, air traffic control, intelligence, weather, and a medical clinic that serves the wing.

The group provides combat-ready aircraft and munitions to the air component commander in support of coalition forces throughout Afghanistan. The group comprises two squadrons responsible for on- and off-aircraft maintenance and sortie generation of F-15E, F-16 and C-130 aircraft, as well as launch, recovery, and servicing support for military and commercial transient aircraft.

The group is the Air Force component for Task Force Med, which provides combat medical and combat medical support services to U.S. and coalition forces throughout Afghanistan. Along with the U.S. Army, the 455 EMDG staffs Craig Joint Theater Hospital at Bagram. 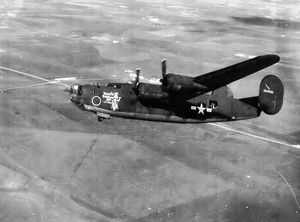 Constituted as the 455th Bombardment Group (Heavy) on 14 May 1943. Activated on 1 June 1943. Activated as a Consolidated B-24 Liberator heavy bombardment unit; assigned to II Bomber Command for training. Primarily trained in New Mexico and Utah received deployment orders for the Mediterranean Theater of Operations (MTO) in November 1943. Moved to Langley Field, Virginia where the group flew long-range convoy escort missions over the Mid-Atlantic, October–November 1943 while station in Italy was being constructed.

They departed Langley in December 1943 and flew to Tunisia by way of Florida, Trinidad, British Guiana, Brazil and Morocco,[1] arriving in January 1944. They remained in Tunisia until completion of their airfield at San Giovanni, Italy, about five miles west of Cerignola and 20 miles southeast of Foggia. The group moved to San Giovanni in February 1944 and flew its first combat mission (Anzio) on 16 February 1944 as part of the 304th Bombardment Wing, Fifteenth Air Force.

Received a Distinguished Unit Citation for a mission on 2 April 1944 when the group contributed to Fifteenth AF’s campaign against enemy industry by attacking a ball-bearing plant at Steyr. They lost 4 of 40 aircraft—40 comrades, including a bomber that crashed near Sveta Trojica (now Slovenia). In addition to successful target damage, they were credited with 27 enemy aircraft destroyed and 17 probables. It was their first heavy loss in two months of combat.

Although meeting severe fighter opposition and losing several of its bombers on 26 June 1944, the group proceeded to attack an oil refinery at Moosbierbaum, receiving another DUC for this performance. Thirty-six planes took off with only 26 returning. Six of the ten losses were from a single squadron. Several of those crews were on their 50th mission.

The figure for combined causes includes causes such as collisions, ditchings, and crashes attributable to As time passed, the fighter opposition decreased but the Germans concentrated their anti-aircraft guns around the fewer remaining targets, so the threat from flak remained intense.

In addition to strategic missions in the Balkans, the group bombed troop concentrations, bridges, marshalling yards, and airdromes during the fall of 1944 to hamper the enemy’s withdrawal from the region. The group also supported ground forces at Anzio and Cassino in March 1944; knocked out gun positions in preparation for the invasion of Southern France in August 1944; and assisted the final Allied drive through Italy in April 1945 by hitting such targets as bridges, gun positions, and troop concentrations. The group flew its last mission (Linz, Austria) 15 months later on 25 April 1945. The mission scheduled for the following day was canceled and the group began preparations to return home.

The group lost 118 aircraft,[1] 31 directly to fighters, 36 directly to flak, and 51 from all other causes combined. They suffered 147 illed in action, 268 Missing in action, 179 prisoners of war,[1] and 169 wounded in action. On the other hand, the group is credited with 119 enemy aircraft destroyed and another 78 probables. Only about 40% of the original crews returned.

Remained in Italy after the German Capitulation in May, although unit personnel were demobilized throughout the summer of 1945. Group was inactivated in Italy on 9 September 1945.

Redesignated 455th Bombardment Group (Very Heavy). Allotted to the reserve. Activated in the US on 25 March 1947 as B-29 Superfortress unit. Inactivated on 27 June 1949. Unclear if group was ever equipped or manned.

The first Minuteman missile arrived on 6 September 1963, and was replaced three days later. The 150th, and final missile was replaced on 26 February 1964, and by late March the wing became combat ready. The 455th SMW maintained combat readiness.

To preserve the continuity of units with distinguished histories, on 25 June 1968, the 455th SMW was redesignated as the 91st Strategic Missile Wing in-place without movement of personnel and was inactivated. The 91st had senior organizational roots dating from World War II and had gained recent fame as a B-52 wing operating over Vietnam. The operational strategic missile squadrons, however, were not redesignated but simply assigned to the 91st SMW.

On 31 January 1984, the 455th Fighter-Bomber Group and the 455th Strategic Missile Wing were consolidated into a single unit under the wing's designation.[3]

The 455th was converted to provisional status in December 2001 and redesignated the 455th Air Expeditionary Group for the Global War on Terrorism. It was activated on 26 April 2002 at Bagram Air Base. In July 2002, the group was redesignated the 455th Air Expeditionary Wing with five assigned groups.[1] Since then the wing has provided close air support, air mobility, intelligence, surveillance, reconnaissance, combat search and rescue, electronic attack, aero medical evacuation, and combat support as the lead Air Force organization in Afghanistan.