The 461st Air Control Wing (461 ACW) is a joint Air Force/Army unit flying the E-8 J-STARS aircraft. The 461 ACW is assigned to the Air Combat Command (ACC), Ninth Air Force, and is stationed at Robins Air Force Base, Georgia. It was activated on 1 Oct 2011.

Originally activated as a tactical bomber wing by Tactical Air Command (TAC) in the 1950s, the wing was organized as a strategic wing and organized by Strategic Air Command (SAC) at Amarillo Air Force Base, Texas in 1963. The wing flew Boeing B-52 Stratofortress heavy strategic bombers and Boeing KC-135 Stratotanker heavy air refueling aircraft. It deployed aircraft and crews to Andersen Air Force Base, Guam for combat operations in Southeast Asia. The wing was inactivated in March 1968 with the closure of Amarillo. 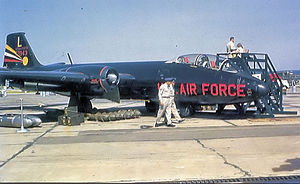 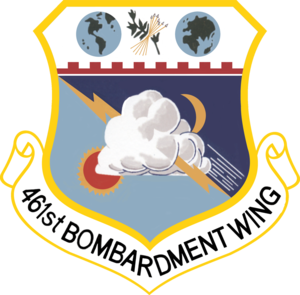 The unit was established as the 461st Bombardment Wing, Light under Tactical Air Command's Ninth Air Force on 11 December 1953. Unit was formed at Hill Air Force Base, Utah and initially equipped with World War II-era B-26B Invader tactical light bombers brought out of storage depots in the southwest. The mission of the 461st Bomb Wing was to provide training in air support of ground forces and air interdiction from lessons learned during the Korean War. Modifications made to the aircraft were made by depot personnel at Hill as a result of combat in Korea meant that the Invader operated at considerably higher weights and with greater loads than had been achieved in World War II.

The Invader, however, was used as a transitory aircraft until the unit could receive the jet-powered Martin B-57 Canberra, which was still under development by Air Materiel Command. On 5 January the wing received its first B-57B[3] and on 1 October 1955 the wing moved to its permanent base at Blytheville Air Force Base, Arkansas. It was redesignated as the 461st Bombardment wing, Tactical, and began receiving production B-57B Canberras. However, a number of B-57Bs were lost in accidents, particularly during high-speed, low-level operations when aircraft suddenly and unexplainably dove into the ground. As these accidents persisted, all tactically assigned B-57Bs were grounded in May 1956 for a period of four months while the problem was investigated. The fault was eventually traced to a faulty tailplane actuator which set the trim incorrectly. The installation of a new actuator switch cured the problem.

The USAF was not very happy with the B-57B as it was initially produced. It was still deemed to be inadequate to meet the night intruder and close support role for which it had originally been designed. The target acquisition system was inadequate, the navigational range was too short, and the radio navigation could not recover the aircraft after strikes. The armament was inadequate—the gun-bomb-rocket sight, the gun charging systems, and the external stores release mechanisms were all unreliable.

After three years of service with the B-57s in tactical bomb groups, the decision was made to phase out the B-57 in favor of supersonic aircraft. The wing turned in its aircraft to TAC for disposition and the wing inactivated on 1 April 1958.

On 5 January 1959, SAC established the 4128th Strategic Wing at Amarillo Air Force Base, Texas and assigned it to the 47th Air Division[4] as part of SAC's plan to disperse its Boeing B-52 Stratofortress heavy bombers over a larger number of bases, thus making it more difficult for the Soviet Union to knock out the entire fleet with a surprise first strike. The wing initially comprised three maintenance squadrons and a squadron to provide security for special weapons. On 1 July, the 58th Aviation Depot Squadron was activated to oversee the wing's special weapons and the wing was transferred to the 810th Air Division.[5]

The wing became operational on 1 February 1960 when the 718th Bombardment Squadron, consisting of 15 B-52s moved to Amarillo from Ellsworth Air Force Base, South Dakota where it had been one of the three squadrons of the 28th Bombardment Wing. Half of the wing's aircraft were maintained on fifteen-minute alert, fully fueled, armed, and ready for combat. The 4128th (and later the 461st) continued to maintain an alert commitment until inactivated. However, SAC Strategic Wings could not carry a permanent history or lineage[6] and SAC looked for a way to make its Strategic Wings permanent.

On 1 July 1962 the wing was reassigned to the 22d Air Division.[7] That same year, in order to perpetuate the lineage of many currently inactive bombardment units with illustrious World War II records, Headquarters SAC received authority from Headquarters USAF to discontinue its Major Command controlled (MAJCON) strategic wings that were equipped with combat aircraft and to activate Air Force controlled (AFCON) units, most of which were inactive at the time which could carry a lineage and history.[6] As a result, the 4128th was replaced by reactivated 461st Bombardment Wing, Heavy (461st BW), which assumed its mission, personnel, and equipment on 1 February 1963.[8][9]

In the same way the 764th Bombardment Squadron, one of the unit's World War II historical bomb squadrons, replaced the 718th Bombardment Squadron. Under the Dual Deputate organization,[10] all flying and maintenance squadrons were directly assigned to the wing, so no operational group element was activated. The 58th Munitions Maintenance Squadron was reassigned to the 461st, while The 4039th's other maintenance and security squadrons were replaced by ones with the 461st numerical designation of the new wing. Each of the new units assumed the personnel, equipment, and mission of its predecessor.

In April 1963, the wing gained an air refueling capability for its bombers when the 909th Air Refueling Squadron was activated with KC-135 tankers. The 909th remained with the wing until June 1966, when it moved to March Air Force Base, California and was reassigned.[11] The wing trained with B-52s maintained heavy bombardment proficiency and participated in numerous operational readiness inspections and actual and simulated exercises. It deployed B-52 aircraft and crews to Andersen Air Force Base, Guam from 18 January to 4 July 1967 for combat operations in Southeast Asia, however its headquarters remained at Amarillo where it served as a deterrent force and also supported SAC's global air refueling mission.

By 1968, Intercontinental ballistic missiles (ICBM) had been deployed and become operational as part of the United States' strategic triad, and the need for B-52s had been reduced. In addition, funds were also needed to cover the costs of combat operations in Indochina. The 461st Bombardment Wing was inactivated on 25 March 1968 and its aircraft were reassigned to other SAC units. As part of the inactivation, Amarillo Air Force Base was closed.

The wing was redesignated as the 461st Air Control Wing and activated in October 2011 when the regular Air Force assumed associate responsibility to the 116th Air Control Wing, Georgia Air National Guard for the JSTARS mission.