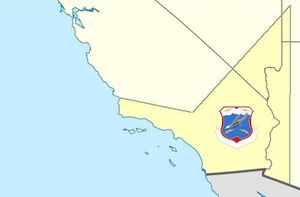 Activated as the 27 Air Division (Defense) on 7 September 1950, the unit was assigned to ADC for most of its existence,[note 1] the division's initial air defense area was southern California and later southern Nevada (and a small portion of Arizona by 1953).[1]

In May 1958, the 27th AD directed a hostile intercept of a "declared unknown" aircraft (without proper IFF), but the "interceptor pilot remembered...that opening bomb bay doors was to be considered a hostile act only after declaration of an Air Defense Emergency or Warning Yellow or Red" (the SAC B-47 was on an Radar Bomb Scoring bomb run near the Los Angeles Bomb Plot.)[5] The 27th AD was designated 1 of 23 NORAD divisions effective 10 June 1958 by NORAD General Order 6.[5]:7 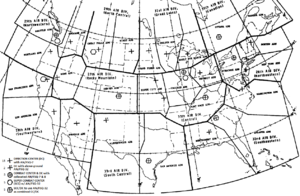 The "27th Air Division (Rocky Mountain)" was to transfer to the midwest with command of 2 NORAD sectors (Reno and Denver Air Defense Sectors) during deployment of SAGE. In addition to a hardened Air Defense Direction Center at Stead Air Force Base for the Reno sector; NORAD's 25 July 1958 SAGE Geographic Reorganization Plan identified the Super Combat Center/Direction Center (SCC/DC) nuclear bunker for the division was to be at Denver, Colorado (cf. the bunkers later planned for the Cheyenne Mountain Complex and in a Cripple Creek mine). The division's general area was west-to-east from the western Nevada state meridian (near the Sierra Escarpment) to the Great Plains near Oakley, Kansas; and north-south from mid-Wyoming to just south of the Four Corners latitude. Existing Permanent System radar stations in the planned Rocky Mountain Division included the Fallon, Tonopah, and Winnemucca Air Force Stations (the atomic-powered "SAGE feeder station" in the Black Hills NF became operational in 1962);[6]:169 and facilities and cities to be protected by the division included the Salt Lake City military installations west of the Rockies and planned Titan missile launch complexes and an Air Force Plant at the Colorado Front Range. The Reno sector was activated 15 February 1959 and the AN/FSQ-7 at Stead Air Force Base[6]:135 was replaced by Backup Interceptor Control (BUIC) at Fallon Naval Air Station by 1970.

In February 1959, the Los Angeles Air Defense Sector was activated during the deployment of the Semi Automatic Ground Environment#Deployment (SAGE) as a subordinate unit of the 27th AD.[7] However, the Denver SCC/CC was cancelled in March 1959; so instead of moving from the Southwest United States to the interior (and the 28th Air Division then taking over as the Southwestern Air Division), the 27th Air Division was inactivated on 1 October 1959 (command transferred to the subordinate Los Angeles Air Defense Sector).

Reactivated in January 1966 at Luke Air Force Base,[1] the 27th Air Division consolidation the Los Angeles and Phoenix Air Defense Sectors, and the division assumed the additional designation of 27th NORAD Region after activation of the NORAD Combat Operations Center at the Cheyenne Mountain Complex, Colorado.[citation needed] The Norton SAGE Direction Center closed in June 1966 (the Luke Direction Center was 1 of 6 still open in 1970).[6]:47 When the 27th AD was inactivated in 1969,[1] its mission, personnel and operations center at Luke were transferred to the 26th Air Division.[1][8]