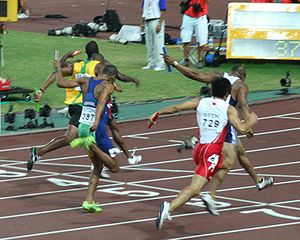 The finish at the Osaka 2007 world championship

The 4 × 100 metres relay or sprint relay is an athletics track event run in lanes over one lap of the track with four runners completing 100 metres each. The first runners must begin in the same stagger as for the individual 400 m race. A relay baton is carried by each runner and must be passed within a 20 m changeover box (usually marked by yellow lines) which extends 10 m on either side of each 100 m mark of the race. Another line is marked 10 m further back, marking the earliest point at which the outgoing runner may begin (giving up to 10 m of acceleration before entering the passing zone).[citation needed]

Transferring of the baton in this race is typically blind. The outgoing runner reaches a straight arm backwards when they enter the changeover box, or when the incoming runner makes a verbal signal. The outgoing runner does not look backwards, and it is the responsibility[citation needed] of the incoming runner to thrust the baton into the outstretched hand, and not let go until the outgoing runner takes hold of it. Runners on the first and third legs typically run on the inside of the lane with the baton in their right hand, while runners on the second and fourth legs take the baton in their left. Polished handovers can compensate for a lack of basic speed to some extent, and disqualification for dropping the baton or failing to transfer it within the box is common, even at the highest level.[citation needed]

The United States has historically dominated this event in the men's, having won 15 Olympic gold medals and 7 IAAF world championships. Carl Lewis ran the anchor leg on five U.S relay teams that broke the World Record from 1983–92, the first team to break 38 seconds.

In the women's event, the United States was considered by many[who?] to be a strong team after years of East German domination, but failed to make it to the finals in the 2008 Olympic Summer Games. Carmelita Jeter ran an anchor leg of 9.70 seconds, the fastest ever in London Olympics 2012.[3]

The women's world record stands at 40.82 seconds, set by the United States of America in 2012 at the London Olympics.

Note: * Indicates athletes who ran in preliminary rounds and also received medals.
Note: In 2007, Marion Jones was stripped of all her Olympic medals from 2000.

Further information: 4 × 100 metres relay at the World Championships in Athletics

Note * Indicates athletes who ran only in the preliminary round and also received medals.

Note * Indicates athletes who ran only in the preliminary round and also received medals.