5-MeO-DMT (5-methoxy-N,N-dimethyltryptamine) is a powerful psychedelic tryptamine. It is found in a wide variety of plant species, and a single psychoactive toad species, the Colorado River toad. Like its close relatives DMT and bufotenin (5-HO-DMT), it has been used as an entheogen by South American shamans for thousands of years.[1]

5-MeO-DMT was first synthesized in 1936, and in 1959 it was isolated as one of the psychoactive ingredients of Anadenanthera peregrina seeds used in preparing Yopo snuff. It was once believed to be a major component of the psychoactive effects of the snuff, although this has recently been shown to be unlikely, due to the limited—sometimes nonexistent—quantity contained within the seeds of this plant, which instead achieve their psychoactivity due to the bufotenin that they contain.[2] It occurs in many organisms that contain bufotenin (5-HO-DMT), and is the O-methyl analogue of that compound. It is metabolized mainly by CYP2D6.[3]

Traditionally 5-MeO-DMT has been used in psychedelic snuff made from virola bark resin, and may be a trace constituent of ayahuasca when plants such as Diplopterys cabrerana are used as an admixture. 5-MeO-DMT is also found in the venom of the Colorado River toad (Incilius alvarius [= Bufo alvarius]), although there was no direct evidence this was used as a hallucinogen until recent times.

5-MeO-DMT is a methoxy derivative of DMT. Its pharmacological action is mainly through serotonin (5-HT) receptors. Specifically, this molecule shows high affinity for the 5-HT2 and 5-HT1A subtypes.[6] Additional mechanisms of action such as inhibition of monoamine reuptake may be involved also.[7] 5-MeO-DMT is O-demethylated by polymorphic cytochrome P450 2D6 (CYP2D6) to an active metabolite, bufotenin.[8] 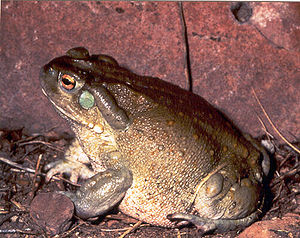 Incilius alvarius, which has 5-MeO-DMT in its venom and skin.

When used as a drug in its purified form, 5-MeO-DMT is vaporized, insufflated, or injected and is active at a dose of as little as 2 mg. 5-MeO-DMT is active orally when taken with a MAOI, but according to numerous reports[citation needed] the combination with MAOI is extremely unpleasant and has a strong body load. Additional mechanisms of action — such as MAO inhibition — may also be involved as, according to the researcher Jonathan Ott, 5-MeO-DMT was active orally for him in a 30 mg dose without aid of a MAOI.[9]

The onset of effects occurs within seconds after vaporizing/injecting, or minutes after insufflating, and the experience is sometimes described as similar to a near-death experience. Peak effects last for approximately 5–10 minutes when vaporized. When insufflated, the peak effects are considerably less intense, but last for 15–25 minutes on average.

Although similar in many respects to its close relatives DMT and bufotenin (5-HO-DMT), the effects are typically not as visual. This confusion can become extremely dangerous because the recommended dosage for 5-MeO-DMT is much smaller than that or DMT (about 1/10 to 1/2 of a smaller dose).[10] Some users report experiencing no visual effects from it even at very high doses.[11] Some report the effects to be unpleasant causing nausea and the feeling of being "sat on by an elephant".[12]

5-MeO-DMT is an analogue of N,N-Dimethyltryptamine making it a schedule 9 prohibited substance under the Poisons Standard (October 2015).[14] A schedule 9 drug is outlined in the Poisons Act 1964 as "Substances which may be abused or misused, the manufacture, possession, sale or use of which should be prohibited by law except when required for medical or scientific research, or for analytical, teaching or training purposes with approval of the CEO." [15]

As of December 1, 2004, 5-MeO-DMT was legally restricted to "medical or scientific purposes". See EMCDDA.[citation needed]

Schedule I / Highest level of control, unable to be prescribed, manufactured, or possessed as of Sep, 1999. (listed as [2-(5-Methoxyindol-3-yl)ethyl]dimethylazan)[16]

5-MeO-DMT is Schedule I (Class A) in New Zealand.[citation needed]

Sveriges riksdags health ministry Statens folkhälsoinstitut classified 5-MeO-DMT as "health hazard" under the act Lagen om förbud mot vissa hälsofarliga varor (translated Act on the Prohibition of Certain Goods Dangerous to Health) as of Oct 1, 2004, in their regulation SFS 2004:696 listed as 5-metoxi-N,N-dimetyltryptamin (5-MeO-DMT), making it illegal to sell or possess.[17]

5-MeO-DMT is Schedule I in Switzerland.[citation needed]

On August 21, 2009, the Drug Enforcement Administration issued a Notice of Proposed Rulemaking to initiate placing 5-MeO-DMT into Schedule I of the Controlled Substances Act (the most restrictive category).[19] Comment DEA-2009-0008-0007.1 requested a 180-day extension of the period for public comment and requests for hearings, objected to the proposed rule on multiple grounds including Constitutional issues, identified the submitter as a person who would be "adversely affected and aggrieved by the proposed ruling" and requested an exemption for religious use if DEA did place 5-MeO-DMT in Schedule I "as an attempt to define and clarify some legal issues."[5]

5-MeO-DMT was added to Schedule I, effective January 19, 2011. This means it is illegal to manufacture, buy, possess, or distribute (sell, trade or give) without a DEA license.[22]