The 50 State Quarters Program was started to support a new generation of coin collectors,[1][2] and it became the most successful numismatic program in history, with roughly half of the U.S. population collecting the coins, either in a casual manner or as a serious pursuit.[3] The U.S. federal government so far has made additional profits of $3.0 billion from collectors taking the coins out of circulation.[4]

In 2009, the U.S. Mint began issuing quarters under the 2009 District of Columbia and U.S. Territories Program. The Territories Quarter Program was authorized by the passage of a newer legislative act, H.R. 2764. This program features the District of Columbia, Puerto Rico, American Samoa, Guam, the United States Virgin Islands, and the Northern Mariana Islands.[5]

The program's origins lie with the Citizens Commemorative Coin Advisory Committee (CCCAC), which was appointed by Secretary of Treasury Lloyd Bentsen in December 1993 and chaired by Mint Director Philip N. Diehl. From the first days of the CCCAC, one of its members, David Ganz, urged the committee to endorse the 50 States Quarters program, and in 1995, the CCCAC did so. The committee then sought the support of Representative Michael Castle (R-Delaware), chairman of the House Banking subcommittee with jurisdiction over the nation's coinage. Castle's initial caution was resolved when Diehl suggested the coins be issued in the order the states entered the Union. (Delaware was the first state to ratify the Constitution). Castle subsequently held hearings and filed legislation to authorize the program.[6]

Diehl worked with Castle behind the scenes to move legislation forward despite the Treasury's opposition to the program.[1][8] However, the Treasury suggested to Castle that the department should conduct a study to determine the feasibility of the program. With Diehl's advice, Castle accepted the Treasury's offer, and the agreement was codified in the United States Commemorative Coin Act of 1996.[9][10] The act also authorized the secretary to proceed with the 50 States Quarters program without further congressional action if the results of the feasibility study were favorable.

The Treasury Department engaged the consulting firm Coopers and Lybrand to conduct the study in 1997, which confirmed the Mint's demand, seigniorage and numismatic profit projections for the program.[7] Among other conclusions, the study found that 98 million Americans were likely to save one or more full sets of the quarters (at the program's conclusion, the Mint estimated that 147 million Americans collected the 50 state quarters). Nevertheless, the Treasury Department continued to oppose the program and declined to proceed with it without a congressional mandate to do so.[4]

In 1997, Congress issued that mandate in the form of S. 1228, the "United States Commemorative Coin Program Act", which was signed into law by President Bill Clinton on December 1, 1997.

The 50 state quarters were released by the United States Mint every ten weeks, or five each year. They were released in the same order that the states ratified the Constitution. Each quarter's reverse commemorated one of the 50 states with a design emblematic of its unique history, traditions and symbols. Certain design elements, such as state flags, images of living persons, and head-and-shoulder images of deceased persons were prohibited.

The authorizing legislation and Mint procedures gave states a substantial role and considerable discretion in determining the design that would represent their state. The majority of states followed a process by which the governor solicited the state's citizens to submit design concepts and appointed an advisory group to oversee the process. Governors submitted three to five finalist design concepts to the secretary of treasury for approval. Approved designs were returned to the states for selection of a final design.

States usually employed one of two approaches in making this selection. In 33 states, the governor selected the final recommended design, often based on the recommendations of advisory groups and citizens. In the other 17 states, citizens selected the final design through online, telephone, mail or other public votes. US Mint engravers applied all final design concepts approved by the secretary of treasury. The media and public attention surrounding this process and the release of each state's quarter was intense and produced significant publicity for the program.[4][11]

The State Quarters Program was the most popular commemorative coin program in United States history; the United States Mint has estimated that 147 million Americans have collected state quarters and 3.5 million participated in the selection of state quarter designs.[4]

By the end of 2008, all of the original 50 states quarters had been minted and released. The official total, according to the US Mint, was 34,797,600,000 coins. The average mintage was 695,952,000 coins per state, but ranged between Virginia's 1,594,616,000 to Oklahoma's 416,600,000. Demand was stronger for quarters issued early in the program. This was due to weakening economic conditions in later years and the waning of the initial surge of demand when the program was launched. Another factor was the reassertion of the Treasury Department's opposition to the program. When the director's term ended in 2000, the Treasury proceeded to reduce and finally terminate the most effective elements of the Mint's promotional program despite the high return on investment they earned.[citation needed]

There is believed to be a "curse" relating to the sites and landmarks featured on the reverse of the quarters; misfortune of some sort has afflicted 17 of the depicted designs. Among the most notable are the Old Man of the Mountain rock formation, which collapsed three years after being featured on the New Hampshire quarter, and the Maryland State House, which was struck by lighting that caused a fire that was promptly extinguished.[12]

In 1997, Congress passed the 50 States Commemorative Coin Program Act, which instructed the creation of the state quarters series to "honor the unique Federal Republic of 50 States that comprise the United States; and to promote the diffusion of knowledge among the youth of the United States about the individual states, their history and geography, and the rich diversity of the national heritage...", and to encourage "young people and their families to collect memorable tokens of all of the States for the face value of the coins."[38] 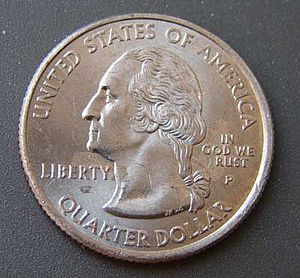 Coin with "In God We Rust" motto

While mintage totals of the various designs vary widely—Virginia quarters are almost twenty times more abundant than Northern Marianas quarters—none of the regular circulating issues are rare enough to become a valuable investment.

There was, however, a measure of collector interest and controversy over die errors in the Wisconsin quarter. Some designs from the Denver mint feature corn without a smaller leaf, others feature a small leaf pointing upwards, and still others have the leaf bending down.[39] A set of all three quarters sold on eBay in February 2005 for $300 and initially saw significant increases, such as $1500 for individual coins, but as of August 2012 PCGS lists the value of MS-62 specimens as approximately $150 each.[citation needed]

Another die cast error ran with the first Delaware quarters. Being the first model of state quarter made, the mint gave it a disproportionate weight causing vending machines to not accept it. The quarter die was quickly fixed. Some Delaware quarters appeared without the last E, thus saying, "THE FIRST STAT".

A major error occurred in 2000 when the reverse die of a Sacagawea dollar was combined with the obverse die of a state quarter on dollar-coin planchets to form what is known as a "mule". Only eleven of these specimens, produced on dollar planchets, escaped from the mint.[40][41][42]

A 2005 Minnesota double die quarter, as well as a 2005 Minnesota quarter with extra trees (another die error), have both triggered numismatic interest. An unusual die break on some 2005 Kansas quarters created a humpback bison.[43] Relatively more common are Kansas quarters bearing the motto "IN GOD WE RUST".[44]

The United States produces proof coinage in circulating base metal and, since 1992, in separately sold sets with the dimes, quarters, and half dollars in silver. For the silver issues, the 1999 set is the most valuable, being the first year of the series and with a relatively small mintage, although prices have significantly decreased since the 50 State Quarters Program ended. The set in base metal, of this or any other year, is worth only a fraction as much. The silver proof sets of later years, while having some intrinsic and collector worth, are also priced far lower. The public is cautioned to research prices before buying advertised state quarter year or proof sets.

In general, the program increased interest in quarter and general coin collecting.[45] Large numbers of ads, quarter products and quarter information were available during the years the program ran. Home Shopping Network, Franklin Mint, and Littleton Coin Company were among the most prominent in ad space.

Since the 50 State Quarters Program was expected to increase public demand for quarters which would be collected and taken out of circulation, the Mint used economic models to estimate the additional seigniorage the program would produce. These estimates established a range of $2.6 billion to $5.1 billion. (At the end of the program, the Mint estimated the actual increase in seigniorage to be $3 billion.) The Mint also estimated the program would earn $110 million in additional numismatic profits. (The final, post-program estimate was $136.2 million.) The Mint used these estimates to support the proposed program, and the legislation enacting the 50 States Quarters program cited these estimates.[4]