The famous territorial regiments that were incorporated in the division were all drawn from the Scottish Lowlands, and have a history that in some cases goes back more than 300 years. It consisted of three infantry brigades, the 155th (South Scottish) Brigade, 156th (Scottish Rifles) Brigade, and 157th (Highland Light Infantry) Brigades.

Initially assigned to the defence of the Scottish coast, the division moved to Gallipoli (without two of its artillery brigades), arriving there in early July 1915. While moving from Scotland the division suffered the loss of 210 officers and men killed, and another 224 injured in the Quintinshill rail crash, near Gretna, that involved the 1/7th Royal Scots.

During the First World War, the division fought at Gallipoli, in the Middle East (Sinai and Palestine), and on the Western Front in France.

The division began landing at the Helles front, on the Gallipoli peninsula, in June 1915 as part of VIII Corps. The 156th Brigade was landed in time to take part in the Battle of Gully Ravine, where it was mauled, under the notorious Lieutenant-General Aylmer Hunter-Weston. Advancing along Fir Tree Spur, to the right of the ravine, the brigade had little artillery support and no experience of the Gallipoli battlefield. The brigade suffered 1,400 casualties, or about half its strength, of which 800 were killed.

When the remaining brigades were landed, they attacked towards Krithia, along Achi Baba Nullah, on 12 July. They succeeded in capturing the Ottoman trenches, but were left unsupported and vulnerable to counter-attack. For a modest gain in ground, they suffered 30 per cent casualties and were in no fit state to exploit their position.

The division moved to Egypt as part of the Egyptian Expeditionary Force, where it manned the east-facing defensive fortifications during the Battle of Romani. On the first, and most crucial day, of the battle the division was heavily engaged with the enemy's right flank, while the Australian Light Horse, New Zealand Mounted Rifles, and 5th Mounted Brigades fought the centre and left flank in extended order. With insufficient water, the mid-summer conditions proved too much for the infantry ordered to advance the following day and were not heavily involved in the fighting thereafter. Following the battle, they advanced across the Sinai occupying Bir el Abd, El Mazar and El Arish, but remained in a supporting role as the fluid nature of the fighting best suited the mounted troops.

The division fought in the First and Second Battle of Gaza in March and April 1917. The annihilation of Sea Post, a strong Ottoman redoubt west of Gaza, in June 1917, by 1/5th King's Own Scottish Borderers, inaugurated the series of successful raids that did much to harass the enemy during the four months prior to the winter campaign.

As a division of XXI Corps, it played an important part in the final overthrow of the Ottomans at the Third Battle of Gaza and the subsequent advance. The division then participated in the Battle of Jerusalem. The Battle of Jaffa saw the passage of the Nahr El Auja, on the night of 20–21 December 1917, by the division's three Brigades, which according to General Sir Edmund Allenby's despatch "reflects great credit on the 52nd (Lowland) Division. It involved considerable preparation, the details of which were thought out with care and precision. The sodden state of the ground, and, on the night of the crossing, the swollen state of the river, added to the difficulties, yet by dawn the whole of the infantry had crossed. The fact that the enemy were taken by surprise, and, that all resistance was overcome with the bayonet without a shot being fired, bears testimony to the discipline of this division. The operation, by increasing the distance between the enemy and Jaffa from three to eight miles, rendered Jaffa and its harbour secure, and gained elbow-room for the troops covering Ludd and Ramleh and the main Jaffa-Jerusalem road." 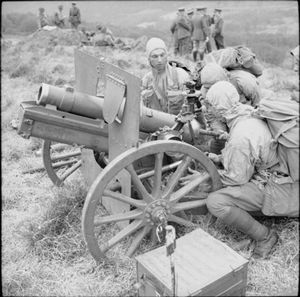 The division would never be utilised in either of the roles it had trained for, and was transferred to Belgium via sea landing in Ostend. The 157th Infantry Brigade landed first at the end of the first week of October, and the rest of the division arrived over the course of the following fortnight.[12][13] On 15 October, the 157th Brigade was, temporarily, attached to the 3rd Canadian Infantry Division[14] and relieved the Canadian units in the bridgehead over the Leopold Canal.[15]

At first the Scots of 52nd Division and the Canadians did not see eye to eye, with a cultural clash of untidy and 'undisciplined' Canadians against 'spit and polish' Scots. On taking over some Canadian positions in mid-October, Scottish officers commented:"No one in Scotland would ask a pig to lie in the houses (recently vacated by the Canadians) on the south side of the canal." However, both sides soon came to recognise that high fighting capability could be engendered in both approaches.[16]

From 23 October until December, the 52nd (Lowland) Division was assigned to the First Canadian Army.[7] The division's first operation would be to aid in opening the vital port of Antwerp, in the Battle of the Scheldt. Ironically, the first operation of the division would not be in mountainous terrain or being deployed by air, but fighting below sea level on the flooded polders around the Scheldt Estuary of Belgium and the Netherlands. Operation Vitality and Operation Infatuate were aimed at capturing South Beveland and the island of Walcheren to open the mouth of the Scheldt estuary.[citation needed] This would enable the Allies to use the port of Antwerp as a supply route for the troops in North-West Europe. It was in this vital operation that the 52nd Division was to fight its first battle with brilliant success that earned them high praise. During the battle, the division was given command "of all the military operations" on Walcheren. This included command of the 4th Commando Brigade,[17] after it had landed on the island, and No. 4 Commando during the assault on Flushing.[18] Following the battle the division would remain on Walcheren until November, when it was relieved by the 4th Canadian Armoured Division.[19]

On 5 December, the division was transferred to British Second Army.[20] During the month, the 157th Infantry Brigade was temporarily attached to the 43rd (Wessex) Infantry Division for several days.[14]

In January 1945, the 52nd Division participated in Operation Blackcock, the clearing of the Roer Triangle between the rivers Meuse and Roer. During Blackcock, 19-year-old Fusilier Dennis Donnini of the 4th/5th Battalion, Royal Scots Fusiliers, part of 156th Infantry Brigade, was posthumously awarded the Victoria Cross. During the operation, the 155th Infantry Brigade was attached to the 7th Armoured Division, The Desert Rats.[21] In February and March, the division was slightly reorganised with battalions being transferred amongst the division’s brigades.[22] Peter White, a 2nd lieutenant within the 4th Battalion, King's Own Scottish Borderers, describes this change due to Field Marshal Bernard Montgomery’s "aversion to two Battalions of the same Regiment" being in the same brigade as it could result "in one home district or town having disproportionate losses after any sticky action".[23] For most of April, the 155th Infantry Brigade was again attached to the 7th Armoured Division[24] "to drive for the Elbe across Lüneburg Heath".[25] 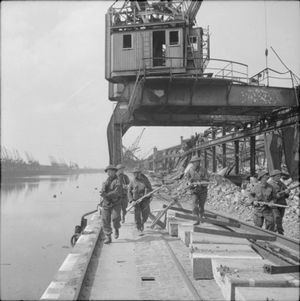 Soldiers of the division patrol the dock area of Bremen, 26 April 1945

The infantry battalions of the division were bolstered with large drafts of soldiers from all over the United Kingdom and were not just drawn from their traditional regimental recruiting areas. This was not uncommon and took place in many units throughout the British Army.

During 1946, the First Canadian Army was withdrawn from Germany and disbanded. As it withdrew from Germany, it "turned over its responsibilities" to the 52nd Division.[28]

In 1950, the 51st/52nd (Scottish) Division was split, restoring the independence of the 52nd Lowland Division, which took regional command of Territorial Army units based in the Scottish Lowlands, including the Territorial infantry battalions of the Lowland Brigade regiments.[30]

In 1967-68, the Division was split into two brigade level districts based in the Highlands and Lowlands, with the Lowland District Headquarters in Hamilton, near Glasgow.