The 53d Weapons Evaluation Group is a United States Air Force unit that reports to the 53d Wing. It is stationed at Tyndall Air Force Base, Florida. The unit is part of Air Combat Command.

During World War II the unit, then known as the 475th Fighter Group, operated primarily in the Southwest Pacific Theater. The 475th Fighter Group was perhaps the best known of the Lockheed P-38 Lightning groups in the theater since it contained among its personnel the top scoring flying aces in the Pacific--Richard I. Bong (40 kills) and Thomas B. McGuire, Jr. (38 kills), both Medal of Honor recipients.

By the war's end, no fewer than 38 other pilots from the 475th had achieved ace status while flying exclusively P-38s. The group's commander for 20 months, Colonel Charles H. MacDonald, scored 27 kills in his famous aircraft, the "Putt Putt Maru" and was the seventh-ranking American ace.

The group remained in the Far East until 1949 as part of the occupation forces.

From 1955 to 1956 the group was an Air Defense Command interceptor group, stationed at Minneapolis-St Paul International Airport. It was inactivated in 1958 when the United States Air Force withdrew its regular units from this civilian field.

The 81st is Air Combat Command's only radar control squadron that is tasked to support live-fire testing and evaluation of air-to-air weapons systems against targets designed to represent anticipated threats. Using the call sign "Wetstone", it provides technical and ground-controlled interception support to Air Force's air-to-air operational test and evaluation programs including the weapon system evaluation program and other DoD weapons tests. It provides range control and flight safety monitoring for over 330 live missile firings and 3,000 combat training and test sorties annually. The squadron is responsible for the daily operation of the range control system, and directs acquisition, logistics and budgeting for range control system modernization.[2]

In 1943 Japanese air strength in the South West Pacific theatre of World War II was powerful, and they were capable of launching large scale attacks against Allied ground forces and installations at any time. On New Guinea, the Japanese had many bases from which to launch their air strikes.[citation needed]

The group was specifically trained to provide long-range escort for bombers during daylight raids on Japanese airfields and strongholds in the Netherlands East Indies and the Bismarck Archipelago.[1] On 14 August 1943, the 475th Fighter Group and its 431st, 432d and 433d Fighter Squadrons transferred from Amberley Airfield to the Dobodura Airfield Complex, in New Guinea. The 431st and 432d operated from Port Moresby. The 431st operated until October 1943 and the 432nd until September 1943. The 433d squadron flew its first mission on 15 August 1943.[citation needed]

The 475th received a Distinguished Unit Citation (DUC) for missions in August 1943 when the group not only protected North American B-25 Mitchells that were engaged in strafing attacks on airdromes at Wewak but also destroyed a number of the enemy fighter planes that attacked the formation.[1]

The group received a second DUC for intercepting and destroying many of the planes the Japanese sent against American shipping in Oro Bay on 15 and 17 October 1943. It covered landings in New Guinea, New Britain, and the Schouten Islands. After moving to Mokmer Airfield on Biak Island in July 1944, the group flew escort missions and fighter sweeps to the southern Philippines, Celebes, Halmahera, and Borneo.[1]

For a while, the 475th included among its personnel the famous pilot Charles Lindbergh. He was serving with the Group as a technical representative from the United Aircraft Corporation. Lindbergh flew a number of combat missions with the Group in June/August 1944 as a civilian to instruct pilots on how to use cruise control to get maximum range and endurance from their P-38Js. On 28 July, Lindbergh was credited with shooting down a Japanese Mitsubishi Ki-51 over Elpaputih Bay in the Netherlands East Indies in a 433d Fighter Squadron P-38 42-104995.

The group moved to the Philippines in October 1944 and received another DUC for bombing and strafing enemy airfields and installations, escorting bombers, and engaging in aerial combat during the first stages of the Allied campaign to recover the Philippines, October–December 1944.[1]

Major Thomas B. McGuire, Jr. was awarded the Medal of Honor for missions on 25 and 26 December 1944 leading flights of P-38’s escorting bombers that struck Mabalacat Airdrome and Clark Field. He scored three confirmed victories on that Christmas day, and on the following day, he scored four more against Japanese fighters. On 7 January 1945, while attempting to save a fellow flyer from attack during a fighter sweep over Negros Island in the Philippines, Maj McGuire risked a hazardous maneuver at low altitude, crashed, and was killed.[1]

The group flew many missions to support ground forces on Luzon during the first part of 1945. It also flew escort missions to China and attacked railways on Formosa. It began moving to Ie Shima near Okinawa in August but the war ended before the movement was completed.[1]

During World War II, the 475th Fighter Group was engaged in combat for approximately two years. The group completed 3042 missions, (21,701 Sorties) and shot down 551 Japanese aircraft. On the other hand, the Group lost only 56 Planes to the Japanese. During the war, the Group took part in seven campaigns, and was awarded three Distinguished Unit Citations for outstanding performance of duty in action. In addition to Majors Bong and McGuire, the unit boasted such "Aces" of the Pacific War as Col. Charles MacDonald (27), Capt. Daniel T. Roberts (14), Lt. Francis J. Lent (11), Lt. Col. John S. Loisel (11), Capt. Elliot Summer (10), plus many more.[citation needed] 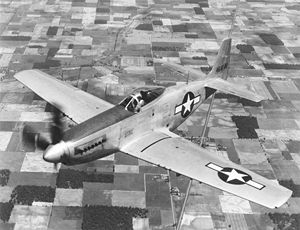 After active combat ended, on 22 September 1945, the 475th moved to Seoul Airfield, Korea for occupation duty as part of the 308th Bombardment Wing of Far East Air Forces (FEAF). The group moved to Kimpo Airfield on 7 January 1946, where it converted to the long-range P-51H Mustang.[1] The following March, the group added an airlift mission when the 46th Troop Carrier Squadron at Kimpo was detached from its parent group in Japan and attached to the 475th.[8] In November 1947, the 433d Fighter Squadron moved to Itazuke Airfield and was detached to the 347th Fighter Group.[9]

However, in August 1948 the group joined the 433d at Itazuke and the squadron returned to the group's control.[1] The same month, FEAF organized its combat units under the wing base organization system and the group became a subordinate unit of 475th Fighter Wing, as did the units supporting it.[10] The 475th Fighter Group was inactivated on 1 April 1949 at Ashiya Air Base, Japan.[1]

In 1955, Air Defense Command (ADC) implemented Project Arrow, which was designed to bring back on the active list the fighter units which had compiled memorable records in the two world wars.[11] As part of this project, on 18 August 1955, the 475th Fighter Group (Air Defense) was activated at Minneapolis-Saint Paul International Airport,[1] where it assumed the mission, personnel and equipment of the 514th Air Defense Group, which was simultaneously inactivated.[12] Because Project Arrow was also intended to unite squadrons with their historical groups, the 432d Fighter-Interceptor Squadron moved on paper from Truax Field, Wisconsin to join the group at Minneapolis,[13] where it replaced the 337th Fighter-Interceptor Squadron, which departed for McGuire Air Force Base, New Jersey.[14] The group also assumed host responsibility for regular USAF units at Minneapolis and was assigned several support units to carry out this responsibility.[15][16][17][18] The group took over the 514th's airborne interception radar equipped and HVAR rocket armed Northrop F-89D Scorpions. By June 1956, the group was flying a mix of F-89Ds and F-89H's. The H model could carry AIM-4 Falcons in addition to the unguided HVARs. Two months later the group was completely equipped with H models.[13] In the late 1950s, ADC began withdrawing from civilian airports, partly because of security concerns arising from the nuclear capability its interceptor aircraft were beginning to acquire. In January 1958, the group and its subordinate units were inactivated.[19]