The 56th Fighter Wing (56 FW) is a United States Air Force unit assigned to Air Education and Training Command. It is stationed at Luke Air Force Base, Arizona where it also is the host unit.

The 56th Fighter Wing was first activated on 15 August 1947. The wing's mission was air defense. The unit wrote another chapter in aviation history 14 July 1948, when its F-80 Shooting Stars made the first ever west-to-east crossing of the Atlantic by military jets. The flight was a month after the Soviets set up their blockade of Berlin, and put the Soviets on notice that this nation had the capability to deploy a large package of military aircraft across the Atlantic in minimum time. The 56th was reassigned to Thailand on 16 March 1967. While deployed to Southeast Asia, the 56th not only supported but also conducted unconventional combat operations against an opposing armed enemy force in Laos.

The 56th Fighter Wing consists of: 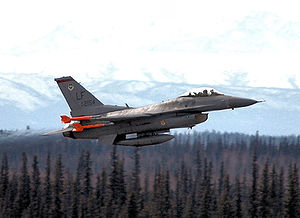 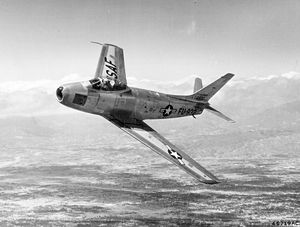 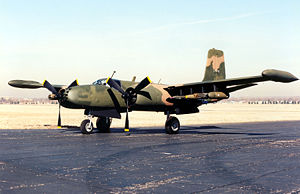 In July and August 1948, the wing pioneered the first west-to-east jet fighter transatlantic crossing along the northern air route from the United States to Europe, involving 16 of its F-80's. The flight proceeded to Fürstenfeldbruck Air Base, Germany, by way of Maine, Labrador, Greenland, Iceland and Scotland. Although the operation was not connected with the Berlin Airlift, it did focus world attention on the U.S. Air Force's ability to rapidly deploy jet fighters during a crisis.

The wing was transferred from Strategic Air Command to the Continental Air Command's Tenth Air Force 1 December 1948 and the mission of the wing's tactical units was shifted to air defense. The unit was redesignated as the 56th Fighter-Interceptor Wing on 20 January 1950. Its 61st, 62d and 63d Fighter-Interceptor Squadrons converted from the F-80 Shooting Star to the North American F-86 Sabre in April 1950.

Although the number of ADC interceptor squadrons remained almost constant in the early 1960s, attrition (and the fact that production lines closed in 1961) caused a gradual drop in the number of planes assigned to a squadron, from 24 to typically 18 by 1964. These reductions made it apparent that the primary mission of K.I. Sawyer would be to support SAC and resulted in the inactivation of the wing and the transfer of K.I. Sawyer to SAC in 1962.[1] On 1 January 1964, the base was assigned to SAC and the wing was inactivated.

Slightly more than three years later, the wing was once again activated, this time at Nakhon Phanom Royal Thai Air Force Base, Thailand. The unit was designated the 56th Air Commando Wing and had a complex combat mission in the war then raging in Southeast Asia (see the Wikipedia article on Nakhon Phanom Royal Thai Air Force Base for more details). Assigned to Thirteenth Air Force, the wing received operational direction from Seventh Air Force in Saigon.

The unit was redesignated the 56th Special Operations Wing in 1968. Attached squadrons of the 56th SOW were:

During the sieges of Khe Sanh from February – April 1968, and Battle of Lima Site 85 from January – March 1968 where it provided close air support. Wing elements participated in the Son Tay Prison raid on 21 November 1970 and continued combat in Vietnam until mid-January 1973, in Laos until 22 February 1973, and in Cambodia until 15 August 1973.

The wing conducted F-4D/E replacement training for pilots, weapon systems officers, and maintenance personnel from July 1975 - July 1982. It was equipped with UH-1P helicopters from 1976 to 1987, to support Avon Range logistics needs, search and rescue efforts, and humanitarian missions.

With conversion to F-16A/B aircraft from 1980 - 1982 the 56th became the designated unit for transitioning USAF and select allied nation pilots into the new fighter, while continuing to augment NORAD's air defense forces in the southeastern US. The wing provided logistic support to US Central Command beginning in 1983 and to US Special Operations Command after 1986. It upgraded to F-16C/D aircraft from 1988 to 1990, providing support personnel and equipment to units in Southwest Asia from August 1990 - March 1991. 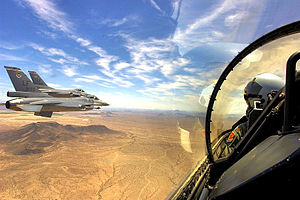 The end of the Cold War led to the BRAC commissions, and the downsizing of the Air Force to a smaller organization. By 1990, it was believed that the Air Force had five more tactical bases than needed to support the number of fighter aircraft in the revised DoD Force Structure Plan. In evaluating Air Force tactical fighter bases it was decided first to close MacDill AFB in 1993, although under political pressure later it was realigned to a new mission.

The 56th Fighter Wing, due to its seniority and historical heritage, would remain active. The wing was moved administratively to Luke AFB, Arizona on 1 April 1994, assuming the assets of the 58th Fighter Wing. The inherited 311th FS, 312th FS and 314th FS, all on F-16C/Ds at Luke, were also inactivated and replaced by the 61st, 62d and 63d FS which had relocated from the 56th FW from MacDill in name-only re-designations. With Luke now earmarked as the sole active duty USAF F-16 training base, the 56th was re-designated the 56th Fighter Wing.

When the wing moved to Luke AFB, the F-15C/D Eagle air defence training previously conducted by the 58th was moved Tyndall AFB Florida, where the Air Combat Command Air Defense mission was being reorganized under First Air Force. The resident Luke F-15E Strike Eagle squadron training at Luke was to cease in the early 1990s <http://www.luke.af.mil/library/factsheets/factsheet.asp?id=5049> with the 461st and 550th Fighter Squadrons being inactivated and their assets transferred to the 4th Fighter Wing at Seymour-Johnson AFB, North Carolina.

The 56th Fighter Wing then increased to an allocation of seven F-16 squadrons with the relocation of the 308th and 309th Fighter Squadrons from Hurricane Andrew battered Homestead Air Force Base, Florida to join the 61st, 62d, 63d, 310th and 425th Fighter Squadrons. The 425th FS, being a joint USAF-Republic of Singapore Air Force squadron providing advanced weapons and tactics continuation training for RSAF F-16 pilots,

The line up of eight squadrons was completed in 1997 with the establishment of the 21st Fighter Squadron to train Taiwanese Air Force pilots. BRAC 2005, reduced the number of F-16 training squadrons to six, with the inactivation of the 63d FS on 22 May 2009 and 61st FS on 27 August 2010, reducing its primary aircraft authorization (PAA) from 201 to 138 aircraft. The Secretary of the Air Force announced in July 2011 that two of the 56th's F-16 squadrons are projected to move to Holloman Air Force Base, New Mexico, in 2014 and 2015, moving than 1,000 personnel and 56 aircraft. They form the 54th Fighter Group which remains assigned to the 56th FW.