List of MPs elected in the United Kingdom general election, 2015

From Infogalactic: the planetary knowledge core
(Redirected from 56th Parliament of the United Kingdom)
Jump to: navigation, search

The election saw each of Parliament's 650 constituencies return one MP to the House of Commons. It resulted in a Conservative majority, a massive loss of seats for the Liberal Democrats, and all but three Scottish seats going to the SNP.

UKIP won its first seat at a general election. Alliance and Respect each had their representation from the last Parliament wiped out. The UUP won representation after none in the previous Parliament.

Below is a graphical representation of the House of Commons showing a comparison of party strengths as it was directly after the 2015 general election. This is not a seating plan of the House of Commons, which has five rows of benches on each side, with the government party to the right of the Speaker and opposition parties to the left, but with room for only around two-thirds of MPs to sit at any one time. 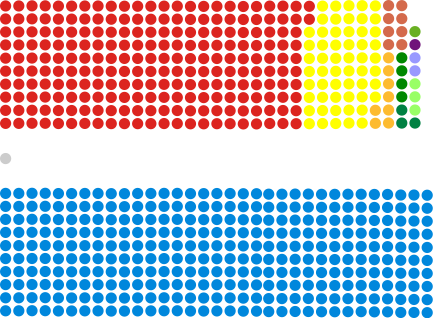 This table shows the number of MPs in each party:

The following table is a list of MPs elected, ordered by constituency.

Names of incumbents are listed where they stood for re-election; for details of defeated new candidates and the incumbent who stood down in those cases see individual constituency articles.

After the general election, changes can occur in the composition of the House of Commons. This happens as a result of the election of Deputy Speakers, by-elections, defections, suspensions or removal of whip.

After the swearing in of MPs and the elections of the Speaker and the Deputy Speakers, the initial actual government majority was calculated to be sixteen. This is subject to changes from the composition of the House of Commons.

The net outcome of all changes over the course of the Parliament has resulted in one fewer Labour MP, two fewer SNP MPs and three more independent MPs.

As per a decision taken by the House of Commons on the final day of its sitting in the previous Parliament, the Speaker appointed two members to serve as Temporary Deputy Speakers until the Deputy Speakers had been elected. Directly after the 2015 State Opening of Parliament, the Speaker nominated Sir Roger Gale (Con, North Thanet) and George Howarth (Lab, Knowsley) for these positions.

The election of Deputy Speakers took place on 3 June 2015.

Although Deputy Speakers do not resign from their parties, they cease to vote (except to break ties) and they do not participate in party-political activity until the next election.

By-elections are held for seats that become vacant.

There have been three by-elections so far. The newly-elected Mayor of London, Sadiq Khan, resigned his seat, Tooting,[5] as stated before the election, triggering another by-election.[6]

Defections, suspensions and removal of whip

In some situations, the label which MPs sit in the House of Commons under can change. When this happens, MPs often become independents.

Thomson withdrew from the SNP whip after her business became the subject of a police investigation into alleged irregularities regarding property deals.[14] As a result, she now sits as an independent. In line with party rules, upon withdrawing from the whip, her SNP membership was suspended.

McGarry withdrew from the SNP whip after being named as under investigation by the police regarding financial discrepancies relating to Women for Independence, a campaign organisation for which she is a founder.[15] As a result, she now sits as an independent. In line with party rules, upon withdrawing from the whip, her SNP membership was suspended.

Danczuk was suspended from the Labour Party, pending an investigation by the National Executive Committee, after allegations were made that he exchanged explicit messages with a 17-year-old girl. As a result of the suspension, he has been withdrawn from the Labour whip, and now sits as an independent.[16]

Shah was suspended from the Labour Party pending an investigation into comments she made on social media prior to her election as an MP which included proposing the relocation of Israel to North America. As a result of the suspension, she has been withdrawn from the Labour whip, and now sits as an independent.[17]