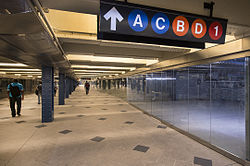 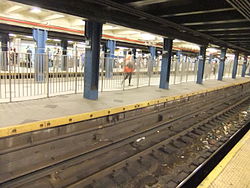 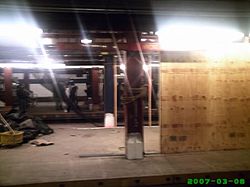 The unused center platform during renovation

59th Street – Columbus Circle on the IND Eighth Avenue Line, opened on September 10, 1932, is a large express station. There are four tracks and three island platforms with the outer two in revenue service.

The next express station to the north, 125th Street, is 3.35 miles (5.391 km) away with seven local stations in between. This is the longest distance between two express stops in the system.

The center platform was first used in passenger service in 1959, but was originally built along with the other platforms. It served the purpose of a Spanish solution, allowing passengers to exit both sides of subway cars as the express trains would open the doors on both sides. Newer subway cars' door controls made it more difficult to open doors on both sides of the train simultaneously, thus this solution became impractical and the platform was closed on November 8, 1973. In 2007–2010, it was converted to a crossunder between the IRT side platforms. Large metal fences have been erected to keep people away from the edges.

At the middle of each open platform, there are two staircases and one elevator that connect with the northbound platform of IRT Broadway – Seventh Avenue Line. There are also one staircase from each platform at the north end leading to the same area. A single staircase at the extreme south end connect to the southbound IRT platform. There are two newsstands which are the center of both platforms.

This station formerly had a 1992 artwork called Hello Columbus, made by various New York City artists and public school students. Sol LeWitt created tile work on the stairway from the platforms to the uptown 1 train entitled "Whirls and Twirls". Currently, large white "59"s are placed over the blue stripes – similar to the "42"s at 42nd Street – Port Authority.

Despite being a major transfer point to the IND Eighth Avenue Line, the station was constructed as a local stop prior to the IND's construction in 1932. At one point, the New York City Transit Authority considered converting the station to an express stop by rerouting the local tracks to the outside of the platforms. This would have coincided with 72nd Street becoming a local stop by fencing off or walling up the express side of the island platforms there.

When the station opened, there was an underpass between the downtown and uptown platforms. In the 1970s, it was closed and the staircase entrances covered over. Today, passengers use the IND mezzanine and platforms to transfer between directions. Both platforms have two fare controls which are on the same level, one of which connects to the mezzanine leading to the IND platforms.

This station complex has many entrances/exits from the streets. The one at the north end of Columbus Circle leads to the Trump International Hotel and Tower. It has a double wide staircase going down to an intermediate level before another double-wide staircase goes down to fare control, where a now unused token booth and turnstile bank lead to the IND mezzanine as well as the north end of the northbound IRT platform. There is also one elevator from the back of the staircase that goes down to fare control.

Two staircases from the northwest corner of Broadway and West 60th Street go down to an unstaffed fare control area, where three full height turnstiles and a short staircase provide direct access to the north end of the southbound IRT platform. Another staircase at the southern island of the aforementioned intersection go down to a bank of turnstiles leading to the center of the same platform.

The south end of the northbound IRT platform has a same-level unstaffed fare control area containing full height turnstiles and two staircases going up to the south corners of West 59th Street and Broadway.

Nearby points of interest