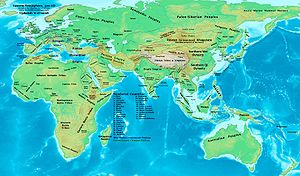 Eastern Hemisphere at the end of the 5th century AD.

The 5th century is the time period from 401 to 500 in accordance with the Julian calendar in Anno Domini / Common Era. The 5th century is noted for being a time of repeated disaster and instability both internally and externally for the Western Roman Empire, which finally collapsed, and came to an end in AD 476. The Western Roman Empire was ruled by a succession of weak emperors, and true power began to fall increasingly into the hands of powerful generals. Internal instability and the pressing military problem of foreign invaders resulted in the ransacking of Rome by a Visigoth army in 410. Some recovery took place during the following decades, but the Western Empire received another serious blow when a second barbarian group, the Vandals, occupied Carthage, capital of the extremely important province of Africa. Attempts to retake the province were interrupted by the invasion of the Huns under Attila. After Attila's defeat, both Eastern and Western empires joined forces for a final assault on Vandal North Africa, but this campaign was a spectacular failure. In the far east, a lot of nomadic barbarian tribes northern to China immigrated into the central part of China and established a series of chinesized dynasties, which launched a 300-year division of the China between the north and the south and long-lasting wars. Both the north and south claim themselves to be the true successor of the ancient Chinese Empire and both rulers title themselves as emperors rather than kings. Unlike the fates of Roman, the barbaric immigrants in northern China were under the command of their emperor to convert themselves into Han or Chinese through the compulsory speaking and writing of Chinese, encouraged marriages with Chinese and farming. 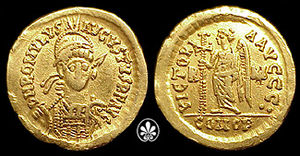 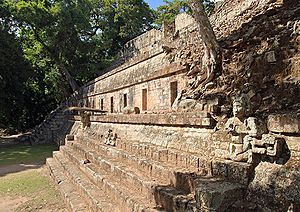