The 64th Air Division (64th AD) is an inactive United States Air Force organization. Its last assignment was with Air Defense Command, being stationed at Stewart Air Force Base, New York. It was inactivated on 1 July 1963.

The organization was established during the early days of World War II as an air defense command and control wing assigned to First Air Force at Mitchel Field, New York.

By February 1943, it was clear that no German planes were heading to attack the East Coast, and the organization was realigned to become a command and control organization for Twelfth Air Force, engaged in combat as part of the North African Campaign. "The wing moved to North Africa in February 1943 and supported combat operations with a warning and control system, and, occasionally, augmenting the operations section of the XII Air Support Command in the Tunisian campaign."[2]

"In August 1944 during the invasion of southern France, wing personnel, applying techniques developed in the invasion of Sicily and Italy, controlled air operations while aboard ships patrolling the assault beaches. With the landing of troops, a beachhead control unit directed aircraft to hit enemy strong points, ammunition dumps, troop concentrations, road intersections, supply lines, and communications. As Allied forces advanced northward along the Rhone valley, the wing implemented a plan to give more rapid support to the ground troops. Forward control units, equipped with the latest in air ground communications, directed sector air ground support. During the operations in France and Germany (1944–1945), the 64th continued to coordinate the close air-ground support of its fighter aircraft."[2]

After the end of hostilities in May 1945, the wing served in the occupation of Germany as part of the XII Tactical Air Command, United States Air Forces in Europe.[2] In Occupied Germany the wing performed many occupation duties such as destroying captured enemy aircraft, repairing roads, bridges and processing Prisoners of War. It also commanded combat units which were inactivating and sending their aircraft to storage, disposal or return to the United States. It was inactivated in Germany on 5 June 1947.[2] 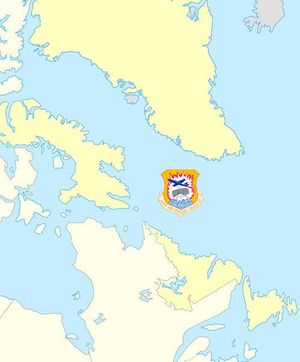 Reactivated as an Air Division under Northeast Air Command (NEAC) at Pepperrell Air Force Base, Newfoundland in December 1952. NEAC had taken over the former Newfoundland Base Command atmospheric forces and ground air and radar stations in Newfoundland, Northeastern Canada and Greenland upon the former command's inactivation. The 64th Air Division was NEAC's command and control echelon of command over these assets.

"Its mission was the administration, training and providing air defense combat ready forces within its designated geographic area of responsibility, exercising command jurisdiction over its assigned units, installations, and facilities. In addition, the division and its subordinate units under its control participated in numerous exercises.[2] NEAC was inactivated in April 1957, and its air defense mission was reassigned to Air Defense Command (ADC).

The 64th continued its operations under ADC at Pepperrell including the operational control of the Distant Early Warning Line (DEW Line) and Air Forces Iceland. In January 1960, it activated the Goose Air Defense Sector (Manual) at Goose Air Force Base. On 26 May 1960, the division headquarters moved from Newfoundland to Stewart Air Force Base, New York, when part of its mission was taken over by the 26th Air Division (SAGE) in a realignment of forces.

At Stewart it assumed the mission of training and providing air defense combat ready forces for the aerospace defense of a 6,000,000 square miles (16,000,000 km2) region of North America, including New Jersey, New York, New England north of Massachusetts, Eastern Canada, and atmospheric forces in Greenland.

The Division was inactivated in July 1963[2] with the phasedown of ADC at Stewart, its mission being taken over by First Air Force.